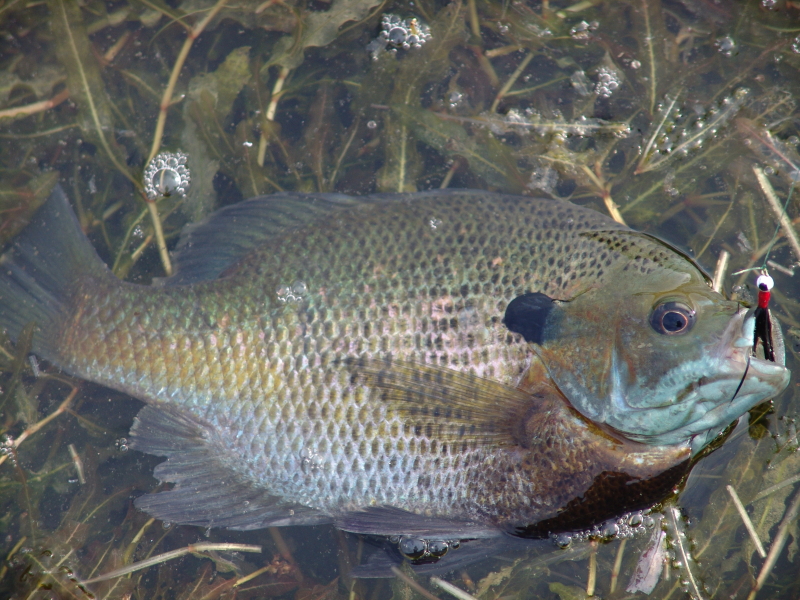 FRANKFORT (May 4, 2017) – Summer is around the corner and families start to go on summer vacations shortly.

Taking your kids to catch some hand-sized bluegill is another great aspect of this time of year in our state.

“A lot of your bigger male bluegill are moving up into the shallows,” said David Baker, Central Fisheries District biologist for the Kentucky Department of Fish and Wildlife Resources. “It is an excellent time to take kids out and get them excited and hooked on fishing.”

Baker took his wife, daughter and son on a trip to a pond on a central Kentucky wildlife management area last weekend. “They caught so many fish; I couldn’t keep up with them,” he said. “My wife and daughter had one on at the same time. It was like that for a solid hour.”

Bluegill in the shallows doing their reproductive dance brings some of the fastest fishing found. “Bluegill are close to spawning and definitely willing to strike bait suspended under a bobber,” Baker said. “I’ve been to several of our central Kentucky lakes recently and received good reports on the bluegill fishing. We manage the smaller state-owned lakes in our district for good panfish populations. Boltz Lake, Corinth Lake, Beaver Lake, Elmer Davis Lake and McNeely Lake are all fishing really well for panfish right now.”

Two of those lakes lie in Grant County, 92-acre Boltz Lake and 96-acre Corinth Lake, and both hold good bluegill populations. “Corinth rebounded from the shad eradication a while back and is doing well for bluegill,” Baker said. “We see them now up 8 ½ inches regularly. We are also seeing redear sunfish up to 10 inches in Corinth.” Redear sunfish are commonly called “shellcrackers” by anglers.

Baker said 158-acre Beaver Lake in Anderson County is full of 8-inch and longer bluegill. “Fish tight to cover and under the cedar trees for bluegill on Beaver Lake,” Baker said. “We also saw redear sunfish up to 12 inches at Beaver. They are out in the middle of coves on the mud flats.”

Elmer Davis Lake covers 149-acres in Owen County near Owenton. The lake is now refilling after a drawdown for repair work on the dam. Kentucky Fish and Wildlife conducted a shad eradication on the lake over the winter that Baker said will improve the bluegill and the redear sunfish populations in the lake over the coming years.

“Another good bluegill lake is McNeely Lake in Jefferson County,” Baker said. “It is right in the back yard of a lot of people in the Louisville area. McNeely also has a healthy population of redear sunfish.”

The smaller state-owned lakes offer excellent bank fishing for bluegill as do the 43 Fishing in Neighborhoods (FINs) lakes scattered throughout Kentucky.

If one has access to a boat, Kentucky Lake is arguably the best bluegill lake in Kentucky. The lake holds fantastic numbers of 6- to 8-inch fish with many larger specimens in the population.

Target the back reaches of coves in May on Kentucky Lake. Those with some flooded timber and an overhead canopy make the best spots. Look for freshly swept depressions in the bottom, indicating bluegill nests. You can catch bluegill all day long from spots like this on Kentucky Lake.

In addition to these lakes, farm ponds and subdivision lakes often hold good populations of bluegill. To check the bluegill population at a lake near you, check the annual Fishing Forecast.

Suspending a wiggling redworm impaled on a size 6 Aberdeen hook under a bobber still works extremely well for bluegill, as it has decade after decade. The rig will also fool any redear sunfish nearby.

Feather jigs tipped with a wax worm or a cricket suspended under a bobber also work well for bluegill. If bluegill get finicky, bottom fish a redworm impaled on an Aberdeen hook near weedbeds. You may also pick off a few redear sunfish with this presentation as well.

The bluegill are in the shallows spawning. For those who want to catch fish after fish, there is no comparison.