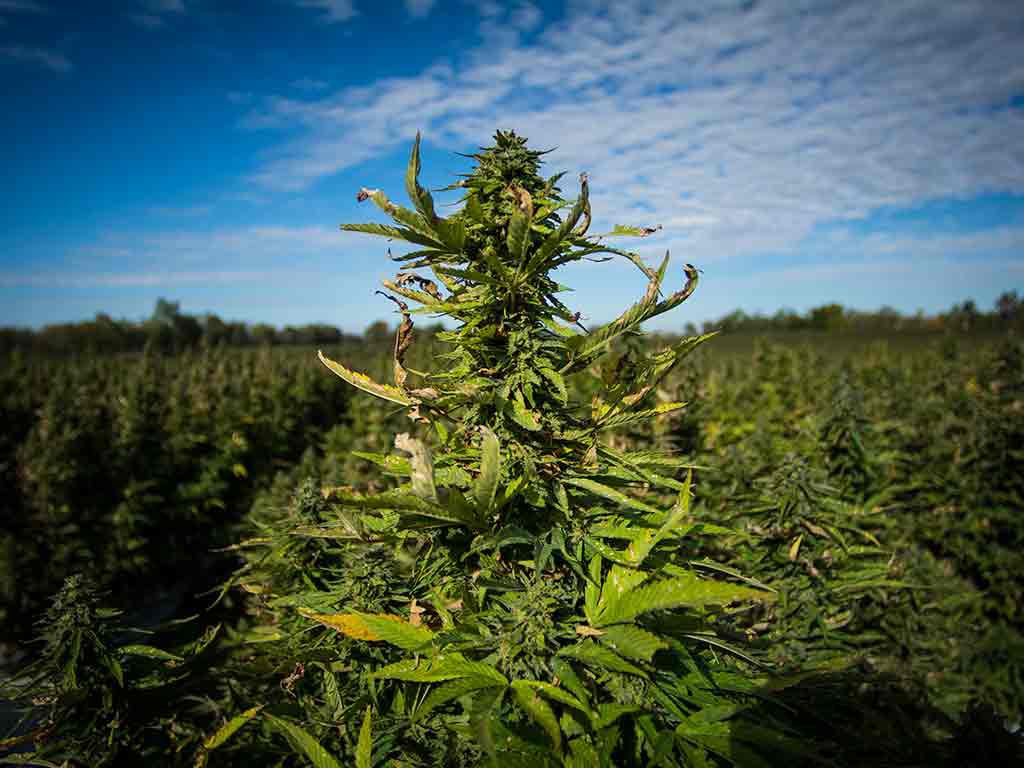 Hemp plants, like these ready for harvest on one of Atalo Holdings Inc.’s Clark County tracts, thrive in Kentucky. Hemp can be used for fiber, food, fuel, and medicine. It can also be used in phytoremediation—leaching contaminants from soil and water and rebuilding topsoil. Photo: Tim Webb

FRANKFORT—Industrial hemp legally grown in Kentucky is not considered marijuana. It has only a fraction of THC—or tetrahydrocannabinol, a psychoactive compound—found in marijuana. And state regulators aim to keep it that way.

Around 100 pounds of industrial hemp grown under Kentucky’s three-year-old Industrial Hemp Research Pilot Program were destroyed just three weeks ago after the state found the crop had a higher THC level than the law allows. An April 13 Associated Press article on the destroyed crop reported that it registered THC levels of between 1.2 and 0.4 percent, or slightly above the federal and state legal limit of 0.3 percent.

Kentucky mandated 0.3 percent as the legal THC limit for industrial hemp grown in the state four years ago when it passed legislation allowing industrial hemp production as part of a state pilot program cleared by the 2014 U.S. Farm Bill. Hemp grown under the state program is routinely tested—as the destroyed crop was—to ensure that its THC level falls at or below the legal limit.

Questions about the destruction of the non THC-compliant crop were raised today before the state legislative Tobacco Settlement Agreement Fund Oversight Committee by Rep. Kim King, R-Harrodsburg. King asked for more information about what happened with the crop from representatives of Atalo Holding of Winchester and Sunstrand of Louisville, two companies that process industrial hemp at their facilities.

Atalo Holdings Chairman Andrew Graves said the crop is question was a variety most commonly grown in the western U.S. “In this climate, when it’s grown, the THC level tends to be a higher level than it should be.” He said there wasn’t any question that the crop needed to be destroyed.

“It’s not a problem with us. We are used to regulated industries—tobacco is heavily regulated—and so this is as well,” said Graves.

King said she is pleased the system worked.

“I’m very, very inspired and I’m very, very hopeful that the system caught a portion of the crop that tested above the legal limit,” said King. “I just wanted some additional discussion on that.”

Sen. Paul Hornback, R-Shelbyville, mentioned the use of industrial hemp in the production of CBD or cannabidiol oil, which is extracted from hemp. CBD oil reportedly helps with balance, mood, sleep, appetite, and can help relieve pain. It has also been known to help with epilepsy. And since the oil is made from low-THC hemp, it doesn’t create the sensation of being high, like marijuana can.

Hornback asked Graves and others testifying before the committee if medicinal products made from industrial hemp, including CBD oil, are more effective if the THC level is above 0.3 percent. Atalo Holdings Research Officer Tom Hutchens said that, as of yet, is unknown.

“We don’t know the answer to that, truly, because there hasn’t been enough research. I think it will probably get (to a) higher (level) somewhere along the line, but all of this has to do with the national scope,” said Hutchens.

Graves said he’d like to see Kentucky increase its legal limit of THC in industrial hemp from 0.3 percent to 1 percent to improve plant breeding options. That would give Hutchens “some leeway, where he wouldn’t be under the scrutiny of law while he’s trying to breed some new variety that could be indigenous to Kentucky and beneficial to farmers here,” he said.

Cultivation of up to 12,800 acres of industrial hemp for research purposes has been approved by the Kentucky Department of Agriculture (KDA) for 2017. That is nearly three times the acreage approved for industrial hemp cultivation in 2016, according to a press release from the KDA. Kentucky has “the largest state industrial hemp research project program in the nation,” the KDA reports.

Some funding for hemp processing in Kentucky has come from the state’s share of the national Master Settlement Agreement, a 1998 multibillion dollar agreement between major tobacco companies and 46 states, including Kentucky. Spending of those funds are overseen by the Tobacco Settlement Agreement Fund Oversight Committee.