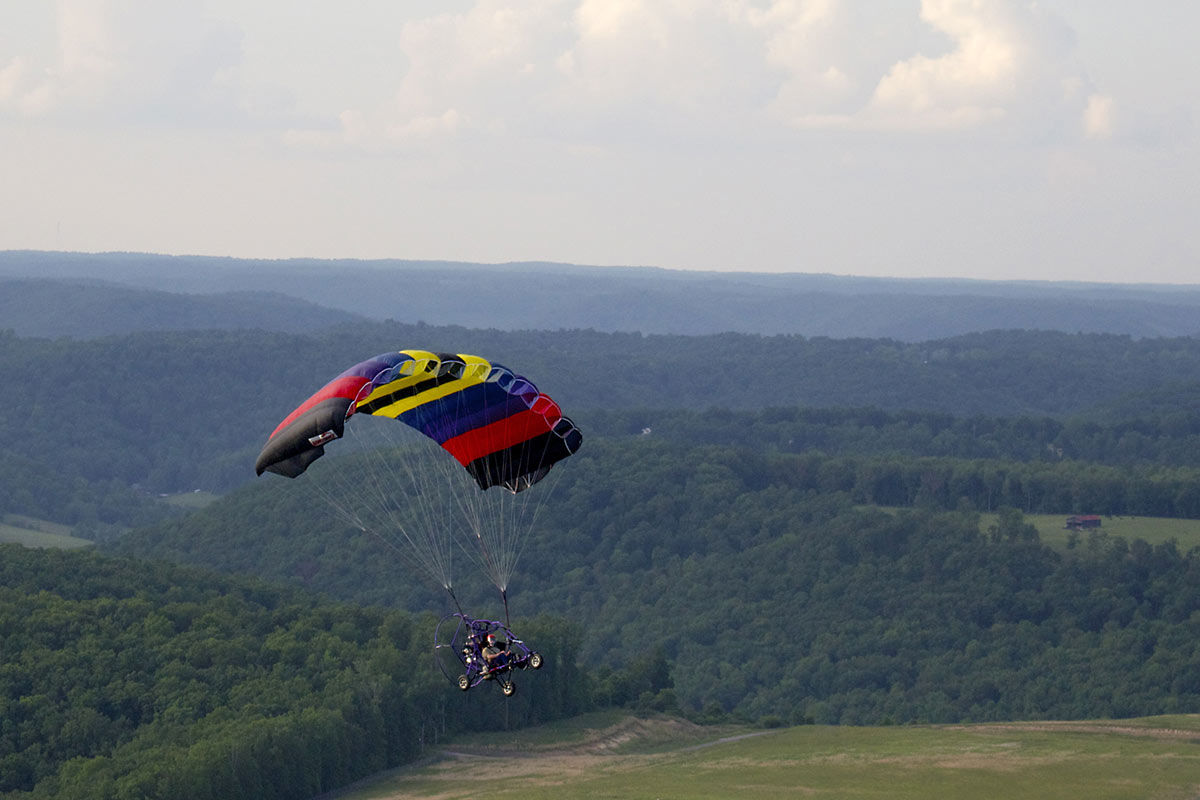 No more fear of the skies

Crawling through dark caverns is no big deal to me. Neither is riding the raging rapids of a whitewater stream or any number of other risky outdoor pursuits. But just the opposite of that is my inexplicable flying phobia. It’s not a fear of heights, but a fear of flying machines themselves. For unknown reasons, I have an inherent distrust of them.

But I found a pilot who changed everything. Dave Lequire of Rowan County offered to take me up in his powered parachute, also known as a paraplane. “SuperDave,” as he is known locally, owns Kentucky Powered Chutes, a company that sells and services double- and single-seated powered parachutes and offers flight instruction. He’s been at it since 1983 when he became the first dealer in Kentucky and one of the first pilots of these affordable machines.

When I’d seen them before from the ground, they looked to me like flying lawn chairs. “How safe could they be?” I asked.

“Flying in today’s aircraft is statistically safer than driving down the street, but powered parachutes are even safer,” he said. “You can’t stall them and they’re self-stabilizing because of their NASA-designed, ram-air inflatable wings.”

On that note, I climbed in the seat behind SuperDave, buckled up, and we sped away on a stretch of grass near the regular runways of the Morehead-Rowan County Regional Airport. The chute billowed open and in nothing flat we were in the air.

We climbed to nearly 1,000 feet as Dave calmly explained the workings of his plane. Finally, I became calm too, mesmerized by the beauty of the forested hills and pastoral valleys below.

What happened next would have been shocking had Dave not told me that these planes couldn’t stall. He cut the engine—but nothing changed. We continued to go forward, albeit in a gentle, downward motion. Now, like a parachute jumper, he steered us back toward the airport. With the engine cut, we were in near silence, hearing only the faint sound of a slight breeze. As the mellow, golden light of early evening cast down upon the landscape, something happened to me. For the first time in my life, flying was beautiful. This had to be very close to what birds experience as they quietly and fluently ride the currents.

Dave cranked on the engine again and we headed in for a landing. When it was over, it was hard to find the words to express what this day had meant to me. SuperDave Lequire had helped me overcome a phobia that has plagued me since I first climbed into a fixed-wing aircraft 35 years ago.

I told Dave the same thing I’ll say here: This was the flight of a lifetime and my greatest outdoor experience.

INSIDER TIPS
To fly a single-seated, powered parachute, you need ground instruction and flying time, but to fly the double-seated version you need a minimum of a sport pilot’s license.

For more information on powered parachutes go to www.kentuckypoweredchutes.com or e-mail Superdav@windstream.net.