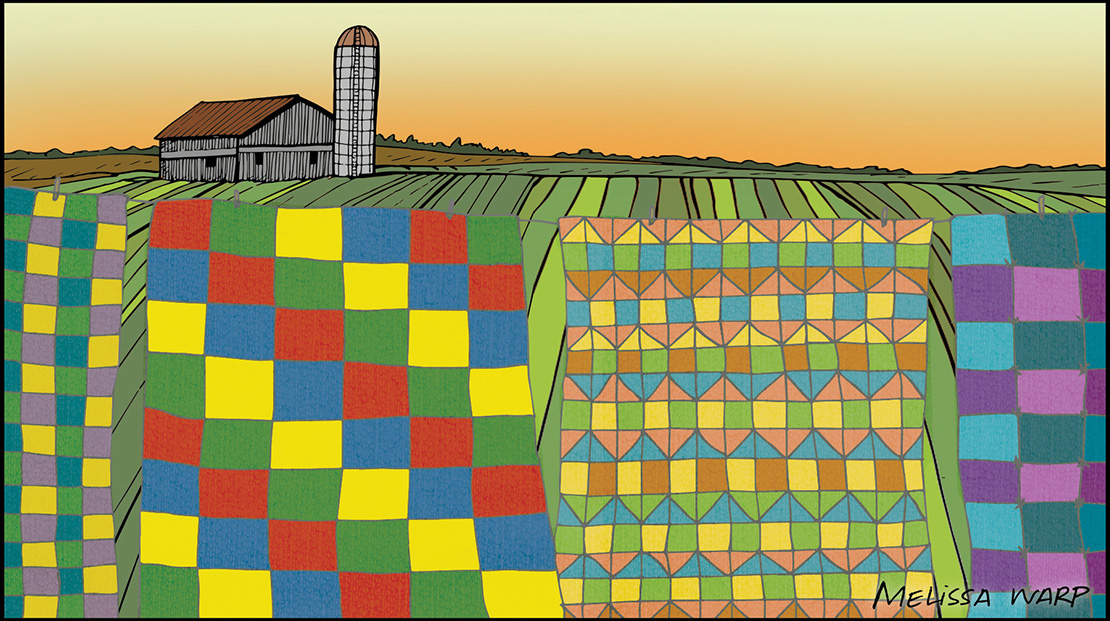 A patchwork of homespun memories has followed Bobbie Smith Bryant from the family farm of her 1960s childhood in rural Calloway County—all the way across Kentucky.

She and her brother, Billy Dale Smith, had the good fortune while growing up of learning not only from their parents, but from both sets of grandparents and great-grandparents. Some of their stories seem as fresh to Bobbie today as when she first heard them as a little girl.

One of her grandfathers owned a country store at Kirksey in northwestern Calloway County, where she and Billy Dale listened wide-eyed to older folks trade tales of the past, debate events of the day, and their crops of dark-fired tobacco. At bedtime on cold nights, they were often tucked under one of their grandmothers’ hand-stitched quilts.

When quilts were hung on the clothesline to air out on a nice day, Bobbie was fascinated by the colorful patterns with odd names: Flower Garden, Wedding Ring, Lone Star, Drunkard’s Path, Jacob’s Ladder, and others.

It may never have occurred to her then that long after she had moved away from the family farm, studied business at Murray State University, and become a community development advisor with the Kentucky League of Cities, living near Louisville, she would reach back for those memories to share with other generations of Kentuckians.

A few years ago, as she began to appreciate more fully her family genealogy and to realize that the way of life she had known in the Jackson Purchase Region was rapidly changing, she began writing about western Kentucky’s cultural and social traditions, and telling others about them across the state as a presenter with the Kentucky Humanities Council.

Her first book, Forty Acres and a Red Belly Ford: The Smith Family of Calloway County, revisits life on the Smith family farm. She later helped produce Farming in the Black Patch, a public television documentary about dark tobacco farming in western Kentucky.

“The catalyst that nudged me toward books, filmmaking, and speaking across the state came when I discovered how little had previously been written, or was known, about western Kentucky,” she says.

Her second book, Passions of the Black Patch: Cooking and Quilting in Western Kentucky, features more than 200 regional recipes, more stories, and a collection of quilts. Together, she and her brother have 23 quilts that have been passed down through their family. And wrapped in some of those quilts are stories as colorful as the quilt pieces.

“I remember Mother talking about when she was a little girl, not much more than a toddler, her parents were hoeing tobacco and her mother had put her out on a quilt pallet (that’s what they called them when they used them outside on the ground), and a big snake crawled up next to her on the pallet. Their dog, Buster, attacked the snake and kept it from harming my mother.”