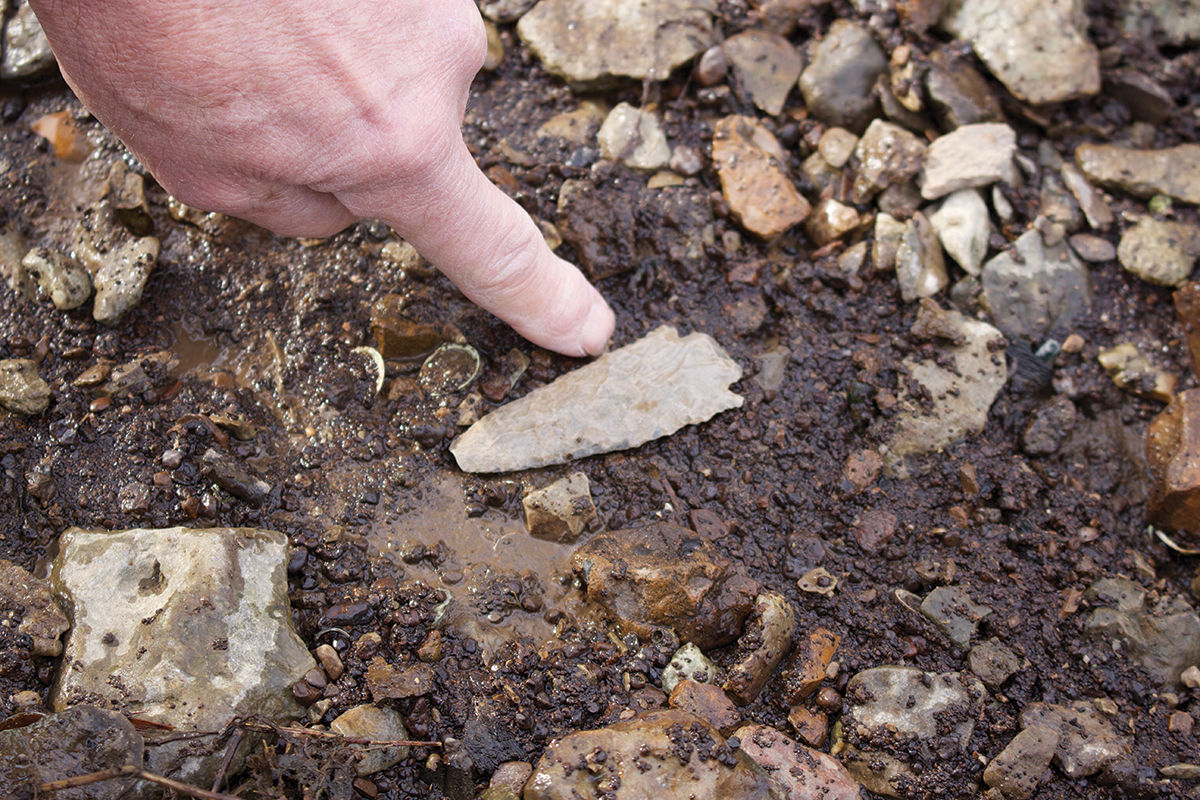 Plowed land turns up echoes of the earliest Kentuckians

By the time I was 12, I had amassed quite a collection of arrowheads by walking through tobacco fields freshly plowed for spring planting. Tobacco was the No. 1 cash crop back then, so there was no shortage of fields to search as long as I could get permission. “They must be 500 years old,” my dad once said of my discoveries. Little did he know that in reality some of my flint artifacts were not 500, but 5,000 years old and even older.

Archaeologists know that ancient people known as Paleoindians inhabited what is now Kentucky at least 12,000 years ago—when the last of the mastodons were still roaming the countryside.

Down through the millennia, Native Americans continued to live and adapt to the natural landscape. Through the Paleoindian, Archaic, Woodland, and Late Prehistoric archaeological periods, they left behind evidence of their lives. Flint arrowheads, stone ax heads, celts, grinding tools, and pottery spanning thousands of years are still out there.

And I still walk plowed fields and stream banks. My eyes have become keen over the years as I look for flint shapes in the dirt. A few years back, I picked up a beautiful white flint spear point. This flint tool was still intact, as if it were made yesterday, somehow surviving the ravages of time and the plow. As I held it, the mind-boggling realization came to me that my hand was only the second hand to have held it in some 4,000 years.

It’s a rewarding hobby, but there are rules that apply. Federal-, state-, and city-owned lands are strictly off- limits to artifact hunting, as are all burial grounds (cemeteries). Even if you have permission to surface hunt on private land, the Kentucky Antiquities Act requires that, although you can keep what you find, you still must report it to the Department of Anthropology at the University of Kentucky. “By doing that we will have a record of the site and an opportunity to investigate it, should the site be threatened by future development,” says Dr. David Pollack, director of the Kentucky Archaeological Survey. “Also, the more we know about the site, the more we can learn about those who long ago called Kentucky home.”

Over time, the owners of private collections often forget where or when they found many of their artifacts, “so it’s a good idea to keep good records for your own sake as well,” Pollack stresses.

Kentucky’s long-dead aboriginal peoples deserve the respect of those of us who look for the artifacts they left behind. Keeping records and at least giving archaeologists a heads up will ensure these ancient peoples are never forgotten.

Most state universities have archaeologists on staff who will help identify your artifacts. Reference books also are available, such as Stone Age Spear and Arrow Points of the Midcontinental and Eastern United States by Noel Justice.

Always get landowners’ permission to search their property.