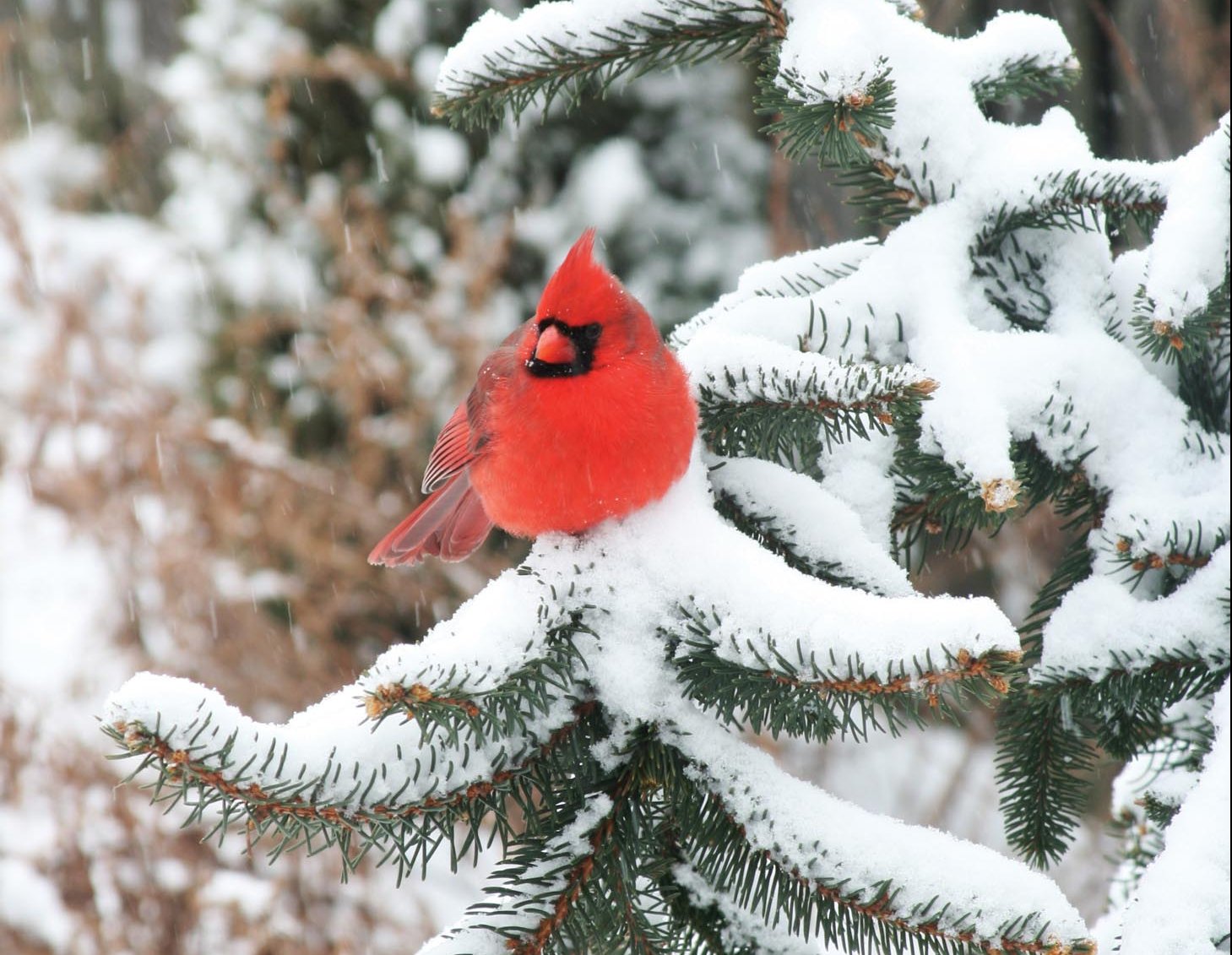 A male cardinal poses for a winter snapshot for photographer Katrina Kelly, Lexington, who submitted the photo to Kentucky Living’s 2020 Photo Contest.

On the bleakest of February days, it’s refreshing to see a splash of scarlet perched in a leafless gray tree. The northern cardinal (Cardinalis cardinalis) is the official state bird of Kentucky.

The cardinal is also colorful in personality, often in a negative way. I’ve watched male cardinals seemingly attack windows, thinking their own reflection is another male. They’ve even been seen attacking small red objects, mistaking them for other males. Cardinals are aggressive fighters, occupying their approximately 4-acre territories year-round. From a treetop perch or from another high object, the males defend their territory, whistling loudly.

The species name comes from the bright red robes worn by the cardinals of the Roman Catholic Church. The scarlet male has a pronounced pointed crest with a black face and a short, thick red-orange bill. The less colorful female also has a jet-black mask and reddish bill, but is mostly pale brown with tinges of red on the crest and tail. Both sexes are accomplished singers—and while other species sing mostly in the spring, cardinals sound loud, rich notes year-round from their habitat of thickets, hedgerows, woodland edges and wetlands.

As members of the finch family, cardinals feed primarily on wild seeds and berries, but they frequently visit backyard bird feeders, favoring black oil sunflower seeds. However, they will capture insects during breeding season, feeding them to their young.

Cardinals breed two to three times per year beginning in the spring; the mating pair stays together for the entire season or even successive years. As the nest builder, the female constructs her nest in dense foliage 3 to 10 feet above the ground. She breaks twigs with her beak to make them more pliable, then turns the twigs around her body while pressing her feet down to make a cup shape. She lays two to four eggs that have a blue, green or brown tint and are marked by blotches.

Both parents initially feed the hatchlings. Before the baby birds leave the nest in approximately 10 days, the male completely takes over the feeding process while the female instinctively moves on to build another nest and incubate the new eggs. Nests are used only once. Now that takes teamwork.

Cardinals were once prized as pets because of their spectacular color and distinctive song. They received protection under the Migratory Bird Treaty Act of 1918, banning their sale as cage birds.

The cardinal is the mascot of the St. Louis Cardinals National League baseball team and the University of Louisville Cardinals basketball team.