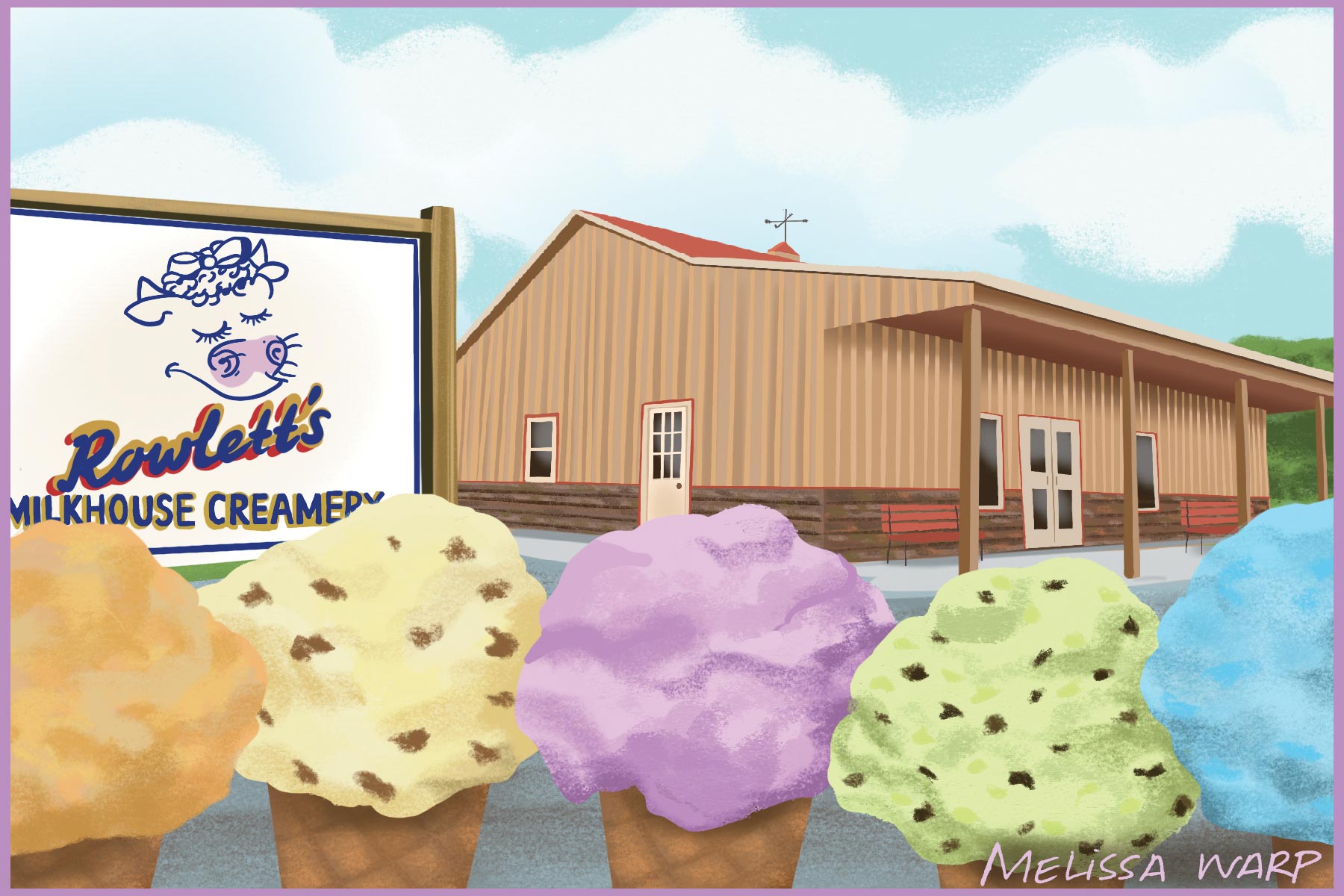 Driven by a craving for ice cream—and always on the lookout for a story—I was drawn one afternoon to Rowlett’s Milkhouse Creamery on a rural side road just off the beaten path near Campbellsburg in northern Henry County.

It turned out that both ice cream and a story were waiting inside the cream-colored building with a red roof and a cow accent weather vane.

Co-owner Terry Rowlett, a lifelong farmer who, with his wife, Sandy, has a dairy farm just down the road, gave me a quick look at how the ice cream, butter and cheese are made. His sister and business partner, Sharon Rowlett, who also owns a farm nearby, manages the office, makes the ice cream and often serves customers. She stitches a quilt in her spare time.

Terry, who is 70, and Sharon, 67, a former principal of Bedford Elementary School in Trimble County, shunned retirement to build the creamery in 2018 and began marketing their own ice cream, butter and cheeses in 2019.

I wanted to hear the whole story, but was trending more toward the ice cream counter and a double scoop of coffee flavored ice cream.

Haley’s is the namesake of a local elementary student whose father promised her ice cream from Rowlett’s if she’d not make such a fuss over having to go back to school. She ordered “blueberry,” which the Rowletts didn’t make at the time. But Sharon decided to begin making blueberry (in season) and to name it after Haley. Prices for cones start at $3.25. They don’t make banana splits, but do serve scrumptious shakes.

The cheeses are products of Terry’s 70-cow dairy herd, but milk for the ice cream and butter is supplied by local dairy cooperatives.

The Rowletts—both consumer members of Shelby Energy—grew up on a family farm in neighboring Trimble County, but relocated to Henry County when their land was acquired for corporate development. They now own about 500 acres in northern Henry County, and Terry leases another 500 acres for crops.

Their creamery is visited by ice cream, cheese and butter lovers from all over central and northern Kentucky, and Sharon says some of her former students often show up.

“It’s been fun so far,” she says. “The days can be a little long, but not as long as when I was a school principal.”

More information about the creamery and its hours of operation may be found on Facebook: Rowlett’s Milkhouse Creamery.