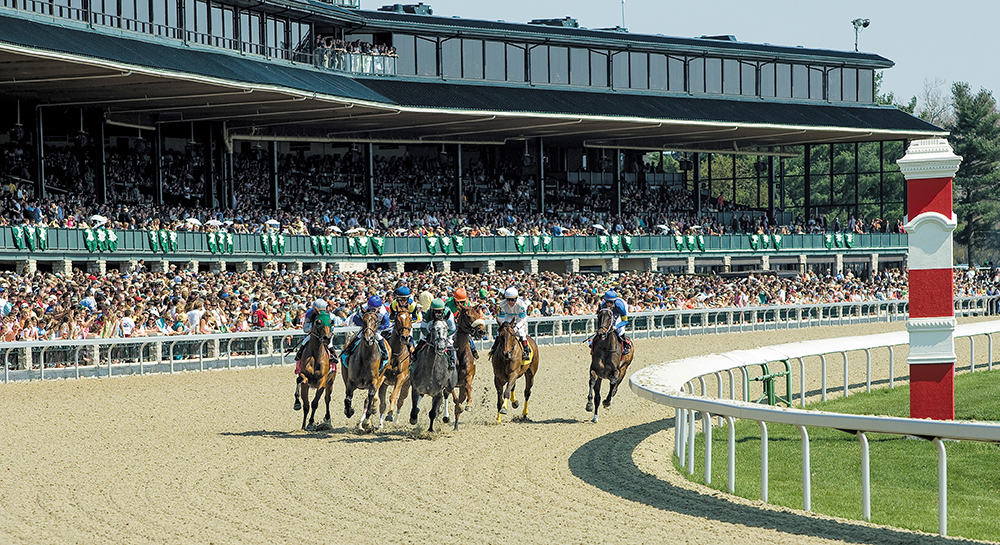 Keeneland, a National Historic Landmark, was founded in 1936 as a not-for-profit racetrack and horse auction facility. Now the largest Thoroughbred sales company in the world, it attracts local and international visitors year-round. Photo: Jeff Rogers

Horses, history, and much more at Keeneland and Lexington

Historic Keeneland’s attractions go beyond a day at the races, as fun as those are. With 1,034 acres of tracks, gardens, stables, eateries, entertainment center, clubhouses, and one of the largest libraries on Thoroughbreds, it’s a year-round destination of family-friendly activities.

The allure of Keeneland, a National Historic Landmark, is both international and intergenerational. Internationally known Thoroughbred trainer Jack Keene developed a training center and track there in the 1920s on land his family owned for generations. Even then, it was known for its beautifully manicured landscape. Central Kentucky horse owners and breeders later purchased the land from Keene and founded Keeneland as a nonprofit racetrack and auction facility in 1936. Today, Keeneland is the largest Thoroughbred sales company in the world.

The twice-yearly spring and fall races and three-times-yearly horse sales attract visitors from around the globe. During Keeneland’s Fall Stars Weekend in early October—a kickoff to the Fall Meet, which this year runs October 6–28—horses bound for the $26 million Breeders’ Cup show their stuff.

Runyon remembers first visiting Keeneland when she was 6, the beginning of an annual family tradition where her mother and friends would take their children to the races.

“We’d get to make a $2 bet to place and I’d always choose the horse whose name I liked best,” says Runyon. “It’s pretty much the same way I choose which horses to bet on now.”

Amy Gregory, Keeneland’s director of communications, who grew up in Henderson, remembers her parents coming to visit during race season when she was attending the University of Kentucky.

“We’d go to the races in the afternoon and the UK game at night,” she says. “It’s called a Kentucky Double.”

Now Keeneland has taken the venerable Kentucky Double to the next level. Visitors can watch simulcasts of both the ongoing race and a college football game side-by-side on The Hill, the designated tailgating area.

Though there’s always been tailgating at Keeneland, its popularity is soaring. The foods range from simple to supreme, including what Gregory describes as “Southern living” feasts, elaborate buffets set up by tailgaters.

At the Track Kitchen, open daily except for major holidays, you could find yourself sitting next to a jockey, owner, or trainer while you eat grits and biscuits and gravy.

Sunrise Trackside during the spring and fall races begins Saturdays at 6 a.m. when trainers begin to put the horses through their paces. Breakfast starts at 7, followed by kids’ activities, guided walking tours, and—for those who want to choose their equines based on more than their intriguing names—handicapping seminars.

“Great food and horses are very much interwoven into the fabric of Lexington,” says Gregory.

Indeed, Debbie Long, owner of the elegant Dudley’s on Short, with its locally inspired menu, talks about her horses while eating dessert under the stars atop her restaurant’s rooftop dining area. Long, a University of Kentucky graduate, opened her restaurant 36 years ago and has seen a resurgence in the downtown area. Now urban-cool, the streets are hopping both day and night.

Surrounded by historic homes, including the Hunt-Morgan House and the Bodley-Bullock House, Gratz Park is a lovely introduction to Lexington history. The Hunt-Morgan House was built by John Wesley Hunt—who became the first millionaire west of the Allegheny Mountains by growing hemp—and was the ancestral family home of John Hunt Morgan of Morgan’s Raiders fame. Ironically, just across the park is the Bodley-Bullock House, which served as both Union and Confederate headquarters at different times during the Civil War. Nearby, in the historic Gratz Park Inn, Distilled at Gratz Park celebrates Lexington’s culinary heritage.

The Morgan home, with its stately gardens, is in view of the former law offices of statesman Henry Clay. Clay’s Ashland estate, rebuilt by his son James from the original plans in 1856, is in one of Lexington’s historic districts. It’s open to the public, as is the house where Mary Todd Lincoln grew up.

“When you touch this bannister,” the guide says, walking up the stairs of this home, “you’re touching the same wood Abraham Lincoln once touched.”