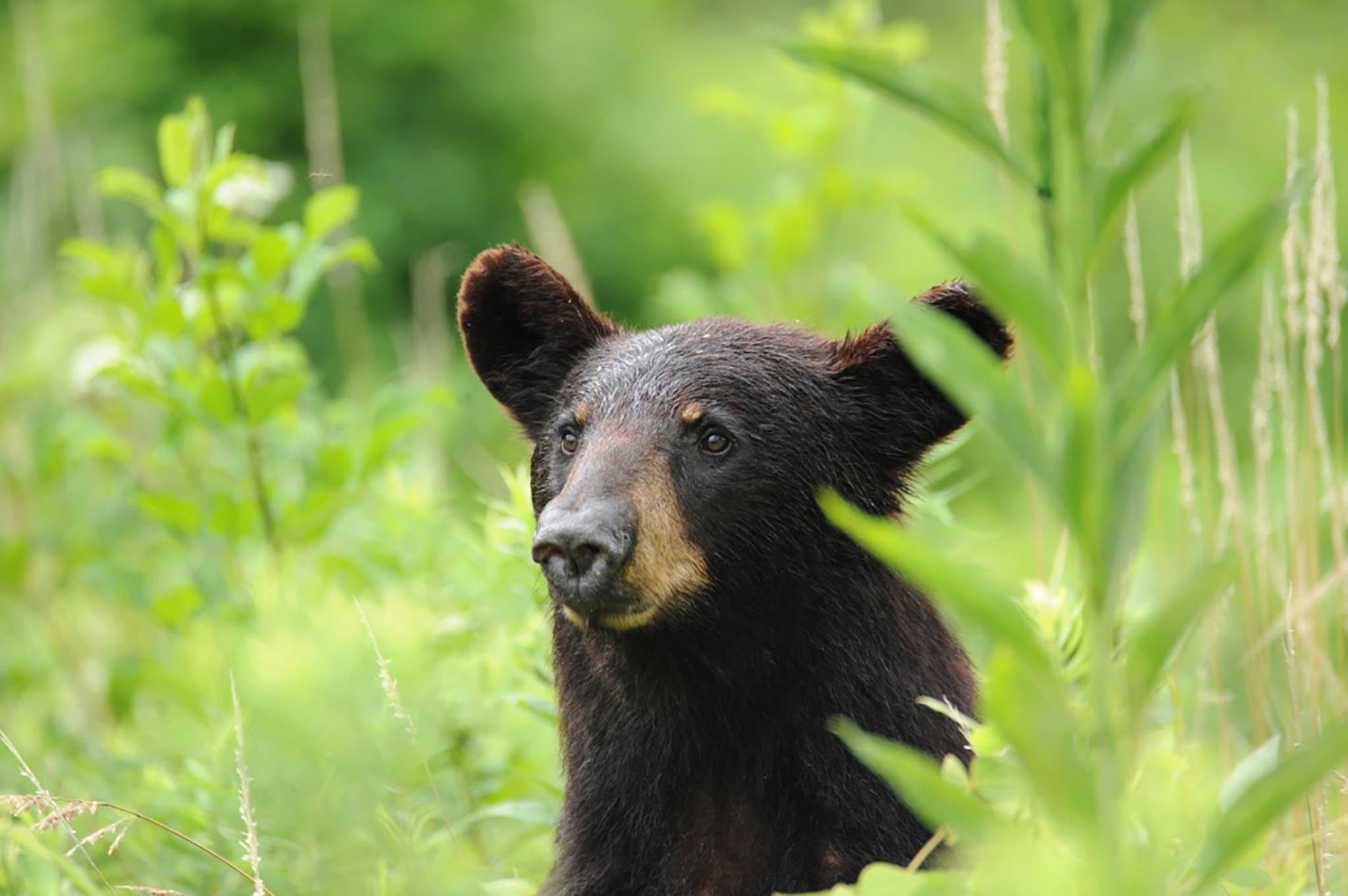 Bears often stand up to see what is happening around them. They may also stand up to “play fight” or actually fight with another bear. Photo: Debra Gibson Isaacs

A young male American black bear took a stroll through the University of Kentucky last year and continued his trip into downtown Lexington. Another bear showed up in Jessamine County. Bears were also spotted last summer in Louisville. It was big news because central Kentuckians are not accustomed to seeing bears in their neighborhoods.

But the chances of seeing an American black bear in Kentucky are increasing, especially in eastern and southeastern Kentucky, according to John Hast, bear program coordinator for the Kentucky Department of Fish and Wildlife Resources, the state agency charged with conserving, protecting and enhancing the state’s wildlife.

“Some counties saw a 20% growth rate in the number of American black bears last year,” Hast says. “That’s as high a growth rate as you will find anywhere in the southeast United States. The expansion is everywhere, particularly east of I-75. If you draw a diagonal line from Cumberland County to Lewis County, you will find that these counties have a resident bear population, some sparse and some robust.”

Determining exact numbers is complicated, Hast says. Bear population growth rate figures come from extrapolating data from numerous sources, including a research program conducted by the University of Tennessee (UT), Tennessee Wildlife Resources Agency, Kentucky Department of Fish and Wildlife Resources, the U.S. Forest and Park services and the U.S. Geological Survey. The results of this work will be published soon.

The research focused on nearly 9 million acres of the Big South Fork area of Kentucky and Tennessee, and southeast Kentucky and northeast Tennessee, according to Josh Alston, the UT graduate student who led the study. While there have been other studies, Alston says this was the first to encompass what biologists believe to be the entire range of this population of bears. He says this will tell researchers how the population has changed over time since bears were reintroduced in the Big South Fork in 1996-97.

Bears have a bit of “built-in physiological magic,” according to Hast.

If the number of bears in a habitat is about at the level the habitat can support, female bears (sows) start having more male cubs. When the habitat can support more bears, the sows bear more females. This is because males leave the territory in which they are born, while females traditionally share space within the mother’s territory. Litter size is also affected by the saturation of bears within a habitat.

Kentucky Department of Fish and Wildlife Resources personnel have been looking at bear numbers since the early 2000s, according to Hast. Since that time, there has been a slight but steady increase in the number of males in each litter. This serves as a proxy for biologists to determine how bear-saturated an area is.

Each winter, department biologists collect important research information and monitor the bear population in southeast Kentucky, using radio collars to track female bears to their dens. There, they assess the litter and the health aspects of both mom and cubs, Hast says. They have conducted other studies to collect hair samples, which are used to study bear genetics.

Along with the opportunity to see one of these iconic animals comes the responsibility to be bear wise.

That’s why Hast and bear biologists in 20 Southeastern states have created Bearwise.org. The site is filled with information about black bears—which can be black, brown or cinnamon colored—and what to do if you encounter one. There are no grizzly bears in Kentucky.

One of the best ways to be safe around bears is to simply keep your distance. If you want to take photos of bears or wildlife on a regular basis, invest in a telephoto lens so you don’t need to be close to get a good shot. Also, when in bear country, look up. Bears are often up in trees and you may walk right by them without ever noticing. They can also be hard to see in tall grass.

As author Linda Masterson says in Living with Bears: “With the black bear population healthy or growing across much of the continent, and people populations on the increase as well, people and black bears are encountering each other more often. And like the early pioneers, we have a choice to make.”

Bears keep to themselves for the most part, except for male bears during mating season. John Hast, bear program coordinator for the Kentucky Department of Fish and Wildlife Resources, says with a little luck, you can see a bear on the Little Shepherd Trail, a winding mountain roadway that runs from Whitesburg to Kingdom Come State Park.

“It’s a nice drive,” Hast says, “with exceptional views from north to south. In June and July there are a lot of roaming males, and like us, bears will walk the roads in early morning and late evening.”

Eastern Kentucky is the most likely place to spot a bear, although Hast says he would not be surprised to see a bear in any county.

Watch a video of Hast discussing a bear sighting in Jessamine County.

The bears are out and about

See if you can answer this science question: Would an American Black Bear born in Kentucky hibernate according to the climate she was born into or adjust her hibernation to the weather conditions she is living in.

That’s one of the scientific queries Tasha, born in southern Kentucky, is answering for bear biologists. Lynn Reynolds, chief biologist and founder of the North American Bear Center and the Wildlife Research Center in Ely, Minnesota is delving into the issue after Tasha became an ambassador (captive) bear in Minnesota when she was orphaned after her mother was killed by a truck. A nearby man took care of her for months but did not have the permits to keep her.

Tasha joined three other American Black Bears at the North American Bear Center in Ely, Minnesota. Rogers said in general Kentucky bears den up 2 months later than those in Minnesota, and Kentucky bears do not go into such a deep hibernation. What did Tasha do?

“Tasha was roaming around in March” Rogers said, “but then we had an unusually warm March. “She was hesitant to walk in the snow at first, but we had April weather in March, and the snow melted a lot. The other bears came out of hibernation later than Tasha.”

“Mothers with cubs normally come out later than female bears without cubs. One of the earliest bears seen here this year was a mother with yearlings (one-year-olds) and an adult male.”

Rogers said Tasha has adjusted well to her life at the Center.

“She roams around, climbs trees, swims in the pond, and finds natural food,” he said. Of course, she is fed natural foods such as nuts and berries and peanut butter as well. She greets visitors daily, and they can see her up close. For more information on the North American Bear Center go to www.bear.org.