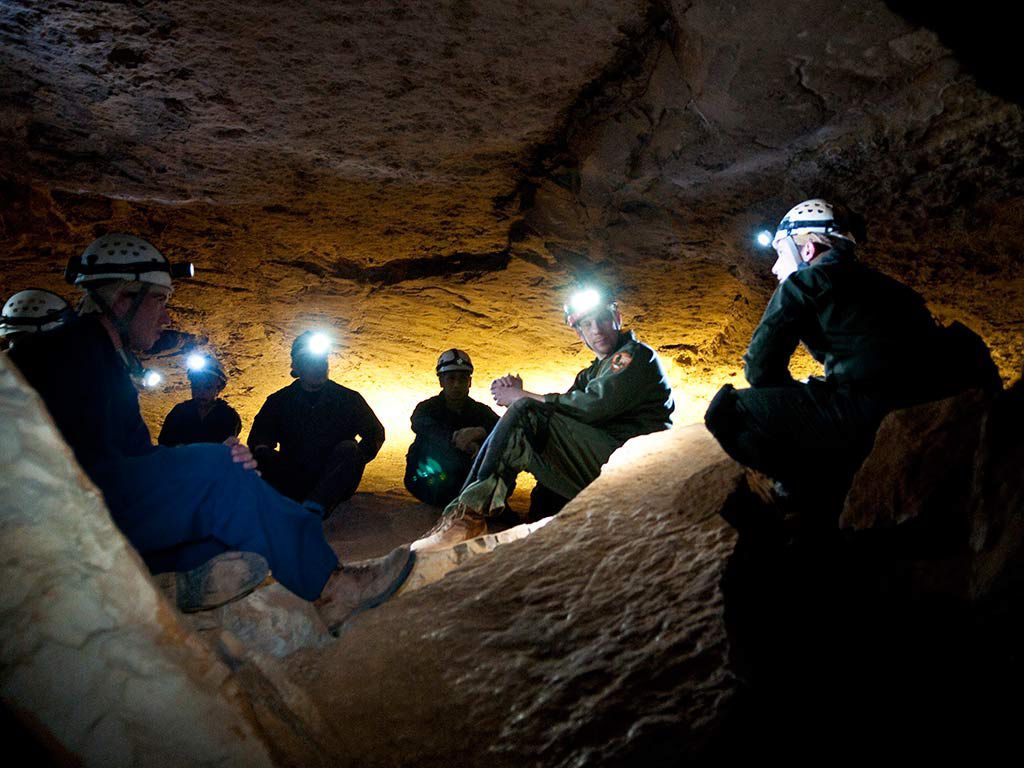 So I count the steps: 96, 97, 98, 99, but give up after 100 as I follow a park ranger down several sets of metal stairs that lead deeper and deeper into the bowels of the mysterious, subterranean labyrinth that has enticed curious explorers for millennia.

Eventually, my tour group descends 280 stairs in this part of the two-hour Domes and Dripstones Tour, one of many different tours Mammoth Cave offers. It is worth the physical exertion in the cavern’s 54–degree year-round temperature, because while the natural wonders that stretch before us are underground, they are heavenly.

This year is perfect timing for a visit—or repeat visit—to Mammoth Cave National Park. It is not only the centennial of the National Park Service, but it is the 200th anniversary of the first organized tours of the world’s longest cave system.

Limestone rock formations half-shrouded in shadow have an ethereal quality that seduce me into lingering at each stop in my tour, but this isn’t somewhere I would want to get lost, so I pull myself away and catch up with the others.

Frozen Niagara, a towering rock formation that seems to flow from the cave ceiling, is a tour highlight. As I crane my neck to take it all in, I am overcome by my insignificance in the universe—a speck inhabiting the Earth for a brief time—but this formation has been here for thousands of years and will remain long after I’m gone.

This would have been a completely different experience back in the 19th century when the cave first became a tourist attraction. Instead of practical jeans and sneakers, I probably would have donned a rented “cave costume” consisting of bloomers and a blouse, an image that draws me out of my serious reflection on the human condition and makes me giggle. Perhaps I would have wrapped up my visit by carving my name into the cave wall, a once-common practice that is illegal today.

In 1816, the year tours began, only a few miles of the cave had been explored, but fast forward a couple of centuries, and more than 400 miles have been mapped. Modern tourists walk along easily navigable cave trails and enjoy amenities such as electric lights and sturdy handrails, but during the 1800s, tours were much more arduous. Rocky trails were illuminated by only the dim flame of a lantern that cast eerie shadows on the cave walls.

Some of those early spelunkers were led through the baffling maze of passages and tunnels by Stephen Bishop (approximately 1822-1859), a legendary cave explorer and celebrated guide. Despite his status as an African American slave, his skill as a guide won him the respect of visitors. A courageous trailblazer, Bishop discovered and mapped miles of new cave routes and is credited with being the first to cross the famous 105-foot-deep Bottomless Pit, a vertical shaft that was a gateway to previously unknown sections of the cave.

To see the natural cave entrance where those pioneering tourists entered, take the Historic Tour. Due to a renovation project, some parts of the trail are closed in 2016, but during the busy summer months, tours will still be offered. The project is expected to be complete by the end of the year.

While this year marks 200 years of official tours, exploration of the cave dates back thousands of years. Evidence suggests the first humans to enter this dank underworld were Native Americans who inhabited the region about 4,000 years ago.

Numerous American Indian artifacts, such as gourd bowls, woven shoes, pottery, and even naturally mummified human remains, have been found deep inside the cave.

During those initial tours, little was known about the science behind the cave, but today we know more about its age and the geological process that formed it. The exhibits in the park’s Visitor Center explain more about the geology, history, and early uses of the cave.

I can’t help but contemplate what discoveries will be made over the next 200 years as new generations of speleologists go ever deeper into this ancient subterranean realm that always seems to conceal more than it reveals.

Mammoth Cave Tours
Unlike visitors 200 years ago, those who come to Mammoth Cave today have an extensive menu of tours to choose from. The tours are offered by season.

Interested in extreme adventure? Plan ahead to take the Wild Cave Tour. Spelunkers are invited to “face the darkness—and the challenge,” according to the Mammoth Cave National Park Web site. “See places no other tour encounters and feel the thrill of exploration!”

The park provides all equipment and outerwear, including gloves. However, visitors must provide their own boots, which must have sturdy laces and cover the ankle. Boots with zippers as support will not be admitted. No tennis shoes are allowed. Guests are advised to bring an extra pair of shoes or sandals to wear during boot cleaning at the end of the tour.

The tour is limited to guests age 16 and up, and adults must accompany visitors under age 18. The tour lasts six hours, covers five miles, and is rated extremely strenuous. The cost is $55 per person, and begins at 9 a.m. on Saturdays and Sundays. Reservations are strongly recommended, but must be made in advance, not on the day of the tour.

FUN ABOVEGROUND
The national park isn’t the only “mammoth” attraction in the area. Before heading home, check out a few aboveground, family-friendly activities in and around Cave City.

Dinosaur World
711 Mammoth Cave Road, Cave City, (270) 773-4345
This 20-acre outdoor attraction has more than 150 life-size dinosaurs that look ready to thunder across their carefully guarded territory in search of their next meal. This fascinating land teeming with powerful prehistoric creatures keeps kids entertained for hours.

Beech Bend Amusement Park and Splash Lagoon
798 Beech Bend Road, Bowling Green, (270) 781-7634
Nothing says family fun like this seasonal attraction with rides for all ages. Little ones love the Bumble Bee Bop, while older kids dare each other to hop on the stomach-churning Kentucky Rumbler roller coaster. When the mercury rises, the whole family can cool off at the water park. Note: Park is open May–September.