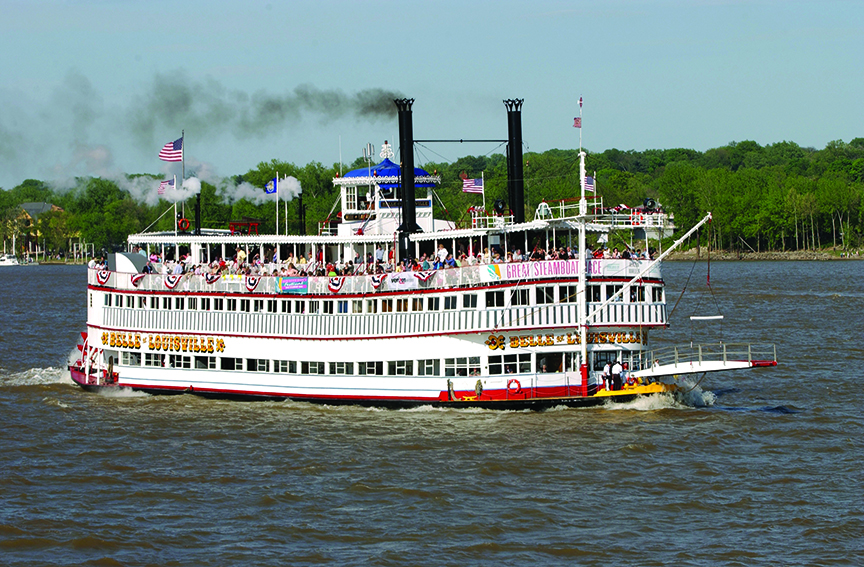 She has survived a near sinking, pushed oil barges up the Mississippi River in the home-front effort during World War II, had her smoke stacks broken in half, and was once raided for carrying seven illegal coin-operated gambling devices—yet she barely looks her hard-won 100 years. But this October 2014, the beautiful Belle of Louisville marks 100 years on the Ohio River and, Neptune willing, will count off many more.

“The engines on the boat today were put on her used and date back to the 1880s, and 20 years ago the Smithsonian Institution requested them to preserve in their Transportation Museum,” says Belle of Louisville CEO Linda Harris. “They are still waiting and will have to wait quite a while longer.”

Named the Idlewild when built as a day packet boat in 1914 in Pittsburgh, this Mississippi River-style steamboat—the oldest in operation in the world—is today a National Historic Landmark that connects her passengers to the storied steamboat era of Mark Twain, calliopes, and showboat-style entertainment.

In 1948, she was renamed the Avalon, the deathbed wish of her captain, Ben Winter. She became the Belle of Louisville in 1963 and hit the waters racing; she ran against another legendary lady, the Delta Queen, in the very first Great Steamboat Race during the Kentucky Derby Festival.

“She has operated on the Louisville wharf for 50 years and marine architects have said she could easily have another 75 to 100 years left in her,” says Harris.

To celebrate the Belle’s centenarian status, a six-day Centennial Festival of Riverboats is being planned for October. In the meantime, visitors can board this iconic grande dame, powered purely by steam-driven paddlewheel, for dining and sightseeing cruises on the Ohio River. Although not the official birthday cruises that will run in October, these excursions are nonetheless festive affairs with musical entertainment—either live or by DJ—dancing, concessions, and full-service bar.

The Belle offers lunch, dinner, and sightseeing excursions, and themed cruises for individuals or groups. She makes five trips a week Thursdays through Sundays, Memorial Day through Labor Day, and weekends in September and October. There is some narration on the sightseeing trips, and more on the themed history excursions. Depending on the weather, the best seats in the house are on the outdoor observation decks. Menus feature old-fashioned Kentucky dishes like fried chicken, Hot Brown, mashed potatoes, green beans, and slaw, with sweets like cobbler and pie for dessert.

As befitting her white-glove good looks, the Belle has a picturesque setting against the backdrop of the pedestrian- and bicyclist-friendly Big Four Bridge spanning the Ohio River between Louisville and Jeffersonville, Indiana. And her front yard? Louisville’s beautiful Waterfront Park, with its Great Lawn, Swing Garden, Promenade, private little pockets of green space, walking paths, and Adventure Playground. There is even a waterpark with a replica Belle of Louisville. Watching over all from his perch atop a rock is Abe Lincoln himself—all 12 feet of him, surrounded by his books and trademark top hat. The statue is part of the park’s Lincoln Memorial.

Directly across the river at the Howard Steamboat Museum in Jeffersonville, you can see the small iron “brig” that was used for many years in the Belle’s engine room, as well as a model of the boat, lots of photos, and other artifacts. Museum Director and curator Keith Norrington is planning additional exhibits and programming during the Centennial Festival of Riverboats, including (tentatively) a presentation by Capt. Clarke C. “Doc” Hawley, who began his career on the Belle when she was still known as the Avalon.

“I have known Doc since I was a teenager and he is a font of river history and information,” says Norrington, whose first job was aboard the Belle in 1971 as a calliope player and assistant purser.

Also in the works is the sight and sound production, “Paddlin’ Into the Past,” to be presented by the father-son steamboat historian duo of David Tschiggfrie and Jonathan Tschiggfrie.

The new Evan Williams Bourbon Experience, which opened last November, fittingly, on Louisville’s historic Whiskey Row, also touches on river history. In the early 1800s, the Ohio River played a key role in transporting and distributing bourbon. Today, visitors are able to return to an even earlier time for an immersive experience—1790s Louisville, when Kentucky’s first distiller was making bourbon—to tour an artisanal distillery and sample the goods.

The Belle of Louisville embodies immersive. When you board the boat, you’re stepping into history, back to 1914 and even beyond when packet boats—those stalwart workhorses of the river—carried pioneers and other adventurers west and contributed to the nation’s economy in the east. The excursion has changed, yet the Belle remains.

To mark her 100th birthday, the Belle of Louisville is throwing a Big Birthday Bash, the pinnacle of the Centennial Festival of Riverboats, October 14-19, 2014, on Louisville’s waterfront. The festival will gather nine riverboats from across the country, including the Spirit of Jefferson (Louisville) and the River Queen (Newport), to cruise the same span of the Ohio River over the course of the six-day festival.

“The last time there have been nine boats in Louisville/southern Indiana at the same time was before World War I,” says Neville Blakemore, event chairman.

The parade of riverboats, featuring live music and fireworks, will be on Saturday, October 18. Theme cruises will be offered—dining; history and heritage; family fun, including ice cream socials and pirate cruises; and Kentucky bourbon, beer, and wine tasting cruises. In addition to the parade cruises, there will be special race and birthday party fireworks cruises.

Expect daily waterfront birthday celebrations, a Balloon Glow, arts, family fun, and plenty of live music and entertainment, with the opening ceremony kicking off everything on Tuesday, October 14. The next evening, the Bourbon Pavilion will have its grand opening.

The 85-acre Waterfront Park, whether you’re visiting the Belle during the festival or another part of the year, is a great place to wile away your hours. A blanket of green stretched across Louisville’s waterfront along the Ohio River, it ushers visitors into a world of quiet, scenic splendor, walking and biking trails, and multiple children’s playgrounds.

Pack a picnic hamper or grab a bite at one of the nearby restaurants. People-watch at the Swing Garden, where you can also see the river traffic from the family-size swings. It’s the perfect spot to take advantage of the city’s newest free attraction: the Big Four Bridge. A stroll or bicycle ride across that pedestrian bridge offers scenic views of Jeffersonville and the Louisville skyline. Enter the bridge on the Louisville side of the river—the Indiana entrance/exit has been under construction and was set to open early this year. See more information and a detailed map online at www.LouisvilleWaterfront.com/park.

Event tickets and information for Belle’s Big Birthday Bash and the Centennial Festival of Riverboats are available at
www.FestivalofRiverboats.com. Other sightseeing and dining excursions can be booked aboard the Belle of Louisville at (866) 832-0011, (502) 574-2992, or www.BelleofLouisville.org.

The Belle of Louisville is docked at 401 West River Road. Boarding is 30 minutes prior to departure. Parking: The Wharf parking lot, 129 River Road (entrance by Joe’s Crab Shack), and the Riverview Parking Garage off 6th Street, across the street from the Belle. Both are pay lots.