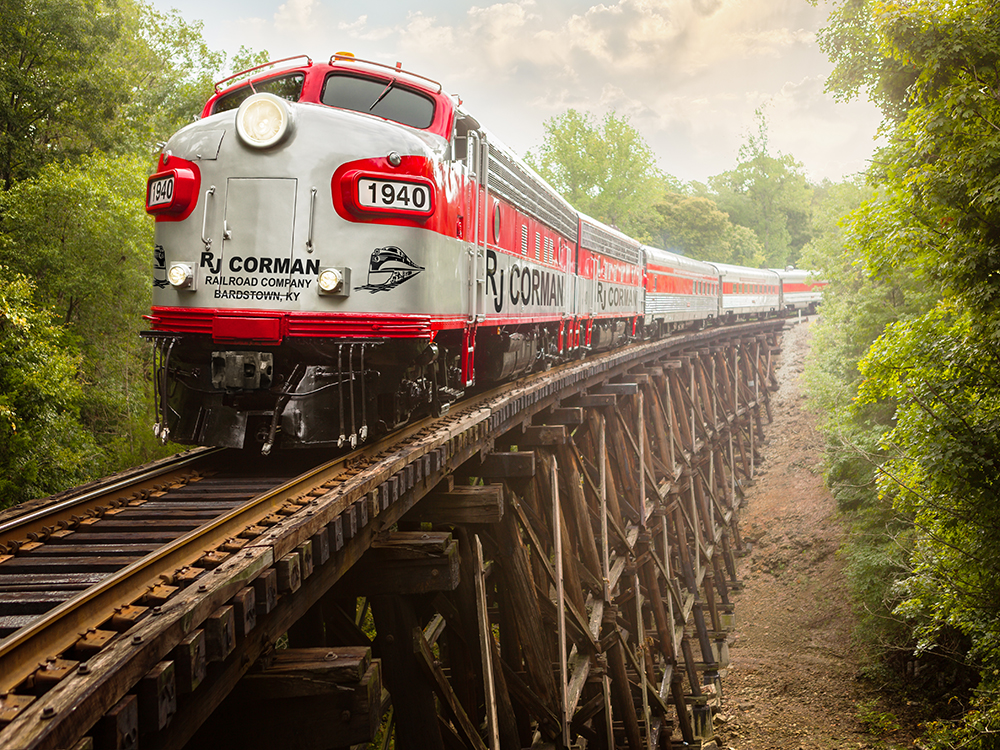 Board a vintage train car and ride the rails into history, to the storied romance of train travel and beautiful Kentucky countryside—through forests, past horses pasturing in the fields and along narrow (and nail-biting) bends. You might encounter thieving bandits along the way, Santa Claus, Charlie Brown and Snoopy—or perhaps even murder most foul.

Visit one of Kentucky’s train attractions and follow the rails to adventure.

Kentucky Railway Museum is a volunteer-based, nonprofit organization whose 5,000-square-foot museum is a replica of the original brick L&N Railroad depot. Themed excursions are offered throughout the year—everything from Thomas the Tank Engine and the Peanuts gang to Mystery Theatre, Civil War and Great Train Robbery weekends. The most coveted tickets? Seats for the Christmas trains. In fact, Kentucky Railway Museum set attendance records in 2017 for its North Pole and Santa Express excursions.

“This is a unique event that has grown from 20 cars its first year to over 200 cars in 2017,” says Lynn Kustes, marketing manager.

Aboard the linen-draped dining cars of the R. J. Corman My Old Kentucky Dinner Train, Santa Claus and murder are tied as the most popular excursions.

“Our Murder Mysteries are in the classic ‘whodunit?’ style and are always sold out,” says Barry Corman, general manager. “As for our North Pole Express runs, it seems like I can never schedule enough.”

These holiday excursions, running from late November through Christmas, feature a visit by the season’s hottest celebs, Santa and Mrs. Claus, plus sing-alongs and story time.

In addition to regular lunch and dinner runs and Murder Mysteries, the first bourbon tasting excursion of the year is in May, along with a Mother’s Day lunch.

The trains run every weekend Easter through October, but headlining the excursion hit parade at the Bluegrass Scenic Railroad and Museum are the Easter Bunny in spring, the Pumpkin Patch in October and Santa Claus in December.

Visitors book passage in either first or commuter class service in antique passenger cars, enjoying plush reclining seats and air conditioning in the former and vinyl bench seats and open windows in the latter. Regardless of seating, all passengers are treated to splendid views of Thoroughbred horse farms and the Kentucky River overlook, where a photo stop is made.

Take a guided tour through five fully restored rail cars at the Historic Railpark & Train Museum. The two-story museum is tucked in an original circa-1925 L&N Railroad Depot. Behind it are the trains, including a Railway Post Office (mail was actually sorted en route to speed mail delivery) and the 1911 car of L&N’s president.

Think you can escape from a locked train in under 60 minutes? The new Caboose Crash and Mercy Train escape games are scheduled to run through the end of 2018.

Upcoming events include the Fourth Annual Brunch with the Bunny.

“Brunch is in our grand L&N Depot lobby,” says Jamie Johnson, executive director. “There is story time on the Duncan Hines Dining Car and visits with the Easter Bunny, along with crafts and a magic show.”

At the Behringer-Crawford Museum in Covington’s Devou Park, train enthusiast Ray Faragher’s idealized recreation of a mid-century community comes to life with working trains, lights and voices—all of which may be seen through viewing bubbles.