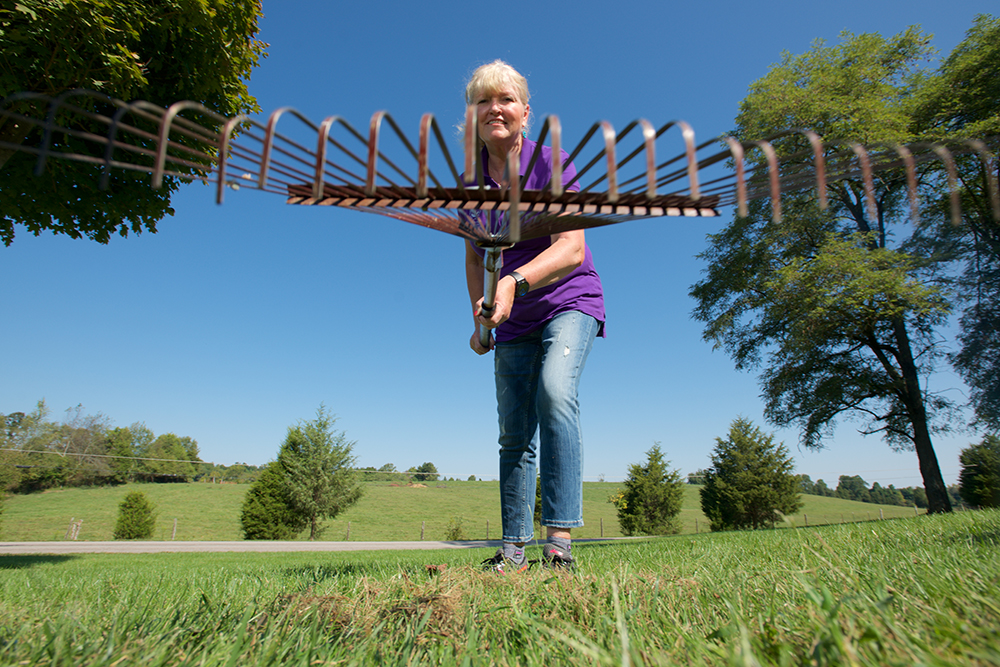 Sherry Phillips has tended to her Elizabethtown lawn and flower gardens for 20 years to keep them in tip-top shape—and it’s a labor of love. Photo: Joe Imel

For so many people, that sweep of impeccably manicured green turf is a symbol of the good life, the scene of happy childhood memories and the setting of natural, aesthetic beauty. The Great American Lawn.

“I consider our lawn the canvas and our garden the art,” says Nolin RECC member Sherry Phillips of her Elizabethtown sanctuary that has been 20 years in the making.

Phillips and her husband, Charlie, started their lawn from scratch. They had built their home on a 2 ½-acre hay field filled with scrub trees that later revealed a base of red clay beneath.

“Boy, has it been fun to create topsoil on top of that,” says Charlie Phillips.

The couple’s first step was to have a soil sample test performed by their county Cooperative Extension Service.

As David Staley points out, this is one of the secrets to achieving a beautiful lawn.

“Have a soil analysis conducted once every two to three years,” advises Staley, operations manager at Ecolandcare Landscape Management, based in Lexington and Georgetown. “Then develop routinely scheduled applications of either synthetic and/or organic-based fertilizers as well as pre- and post-emergent weed controls based on the results of the soil analysis.”

Depending on the county, lawn do-it-yourselfers may be able to get their soil sample tests free of charge from their local Cooperative Extension Service.

“Some counties subsidize the cost, others find sponsors, some have to pass the cost on to their clientele,” notes Amy Aldenderfer, extension agent for horticulture and Master Gardener Program coordinator at the Hardin County Cooperative Extension Service.

“A basic soil test measures the levels of phosphorous, potassium, pH, calcium, magnesium and zinc that are available to plants,” says Aldenderfer.

Three other secrets to a beautiful lawn? “Mowing with a sharp blade and doing so in an effort to avoid cutting more than one-third of the overall turf height, core aerating, and over-seeding with a certified variety or blend of varieties that have been tested and are recommended for our soil types and climatic conditions,” Staley says.

In spite of being armed with tips for growing and maintaining a beautiful lawn, doing so is not without its challenges—especially

in Kentucky, known among the gardening set as the Transition Zone.

Staley explains: “Our lawns experience an array of climatic conditions that can make things difficult in contrast to other areas/zones of the United States. In addition to the ever-changing climatic conditions, we also have to deal with and overcome our clay-based soils that do not drain well and thus retain water.”

Selecting turfgrass varieties that have been tested and perform well in such conditions is one way to try and beat Mother Nature at her own game. Creating and maintaining a lawn that has nutritional value and is well-aerated is another. In other words, healthy lawns are well-balanced in terms of necessary nutrients and are aerated—which is perforating or puncturing the soil to allow air, water and nutrients to penetrate the grass roots.

The Phillipses have had success with Falcon Fescue because of its color and resistance to disease and drought. They also consider Tall 31 Fescue to be a good choice.

“Choose drought-tolerant turf species,” advises Sherry Phillips. “And remember, no grass does very well in deep shade. If your yard has a lot of large trees, it will be an ongoing battle to keep and sustain grass.”

Still, a lawn is a lawn is a lawn or, as Phillips says, “Grass is beautiful, but let’s face it: With lovely blooming bushes, roses climbing a trellis and colorful flowers in a grouping around a tree, it goes from pretty to gorgeous.”

Having retired seven years ago and earned her Master Gardener credentials, Phillips has landscaped and created gardens around the natural features of her lawn, which includes a sloping backyard. She and her husband created a natural staircase using rocks found at a local landscape business that had once been used, she says, as the hand-hewn foundation of a barn.

Charlie Phillips and friends of the couple built a gazebo at the top of hill in the Phillips’ yard from plans Sherry found online. The two then built a rock patio around the gazebo. That was followed by a pond and waterfall. Next, retaining walls were built on either side of the stairs leading up to the gazebo, and then filled with flowering plants. With all of this “art” on her lawn canvas, Phillips still considers her garden a work in progress.

“My yard is a work of love, and my husband and I do it as a team,” she says. “I don’t know what we’ll do next, but he retires in August and we are already talking about doing a fence project and landscaping around it.”