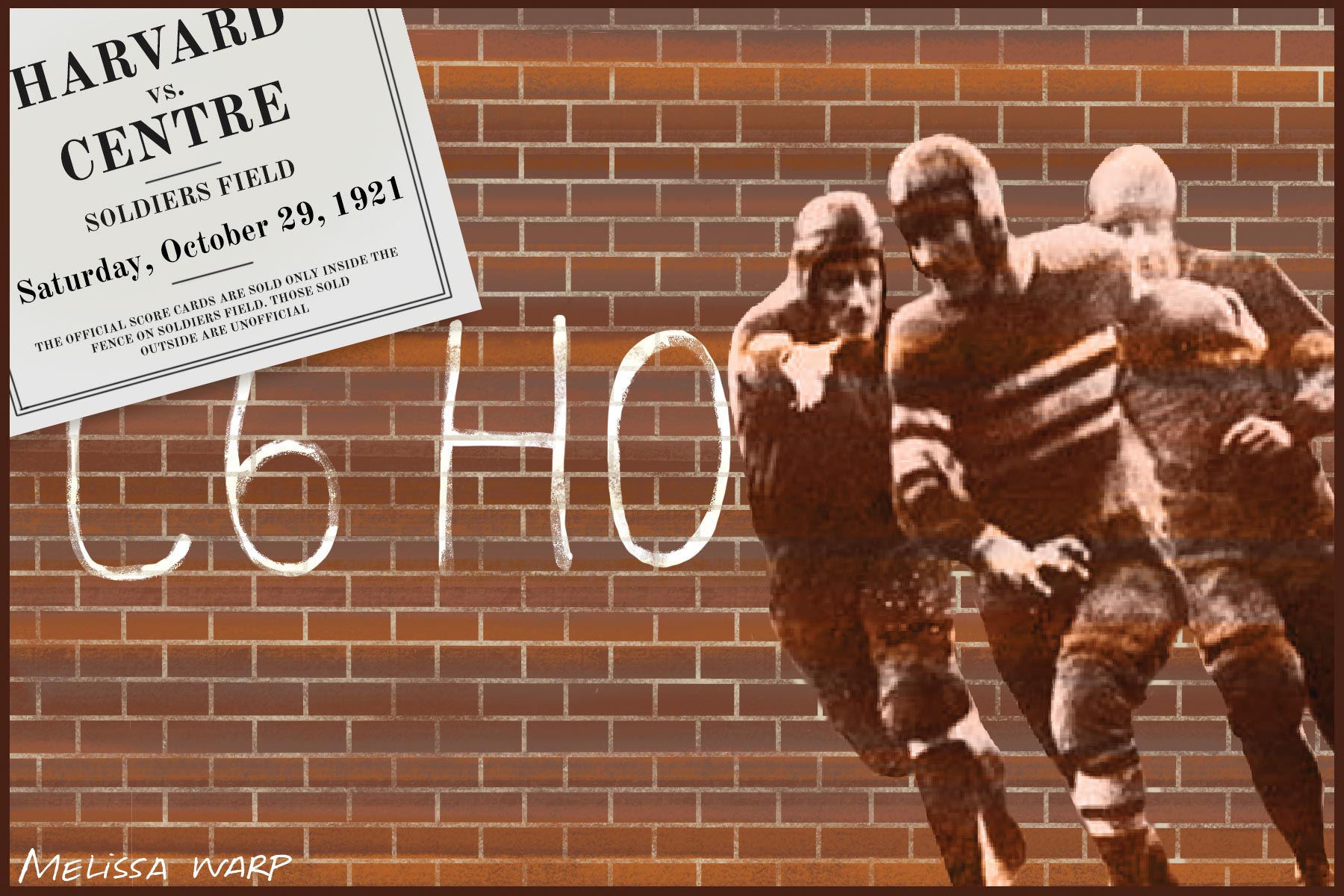 A 3-FOOT-HIGH INSCRIPTION, “C6 H0,” in fading white paint on the corner of an old campus building at Centre College marks a glorious chapter in the Danville school’s sports history—100 years ago.

On the afternoon of October 29, 1921, in Cambridge, Massachusetts, the Centre “Praying Colonels” from the central Kentucky school with a student enrollment of 262 beat the reigning Rose Bowl Champion Harvard University Crimson 6-0 in what The New York Times called, “arguably the upset of the century in college football.”

Undefeated Harvard—boasting four national championships over the previous 10 seasons —seemed nearly invincible. Centre, though unbeaten, was starting four freshmen linemen and seemed hopelessly outmanned. Most of the Colonels played both offense and defense, and star quarterback Alvin “Bo” McMillin said, “You had to get nearly killed to have a substitute sent in.” Then there was “Red” Roberts, the Centre standout who played without a helmet!

Their coach, “Uncle Charlie” Moran of Horse Cave, a professional baseball umpire in the summer, was a tough but much-loved taskmaster.

Centre had Kentucky players from Somerset, Springfield, Mayfield, Owensboro, Lawrenceburg, Harrodsburg, Lexington, Louisville and Newport, and others from Texas, Arkansas, Louisiana and Ohio.

A scrapbook of news clippings that Centre lineman Col. George Chinn passed on to his grandson, Howard “Buddy” Howells of Harrodsburg, relates how Centre had been beaten by Harvard 31-14 in 1920, but played such an outstanding game that Harvard’s captain offered Centre’s McMillin the game ball. Bo replied, “I’d rather come back and earn it by winning.”

A smug headline in the Boston Globe had read, “Centre Doesn’t Worry Harvard.” But after 45 minutes of brutal play, Centre led 6-0. Dr. Robert W. Robertson Jr.’s book, The Wonder Team, in a virtual play-by-play of the game, quotes Boston Post writer Howard Reynolds as saying the third quarter was the greatest quarter of football he’d ever seen.

When the game ended with a 6-0 Centre victory, a gruff referee turned to McMillin with the football, and said, “Mr. McMillin, here is your ball.”

Soon, buildings all over Danville and beyond were emblazoned with “C6 H0” in paint or whitewash—which 100 years have since erased. But retired Danville businessman Gary T. Gibson and Danville native Thomas Isaac of Lawrenceburg believe that, with a little help, one inscription has survived.

The victorious Colonels would have passed right by the original after exiting the train to a throng of delirious fans back in Danville and making their way up West Walnut Street where—on the corner of the old building for a century now—someone has kept repainting the score, “C6 H0.”