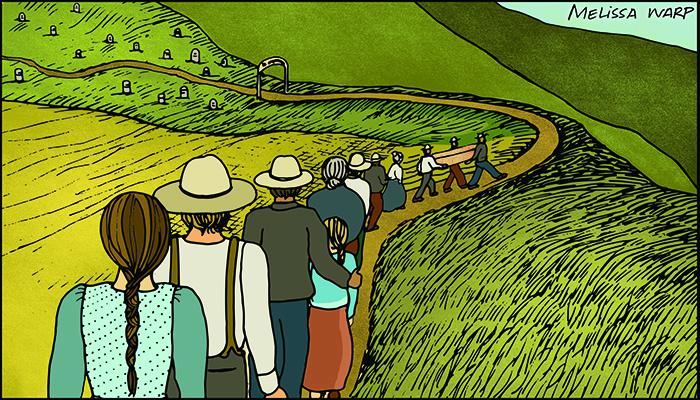 My most poignant memories of years spent tracking stories through eastern Kentucky are images of mourners trudging, single file, up a winding path behind a casket being carried to a small, family cemetery halfway up a mountainside.

Such scenes always brought me to reverence—even in passing—and left me wondering what powerful, unwritten stories lay buried, perhaps lost forever, beneath those gravestones.
Bruce Hopkins of Pike County was determined that many of the stories buried with his kinfolks in the county’s Old Prater Cemetery on Greasy Creek would not be forgotten if he could help it.

Through his book, Spirits in the Field (Wind Publications at www.windpub.com), he would bring voices to those whose names are chiseled on weathered markers, and to others in unmarked graves.

As a boy, Hopkins had helped his father clean the grounds and mound up the graves before placing flowers on them every Decoration Day. The many stories he heard back then from old family members meant little to him in his youth, but now, older and in failing health, he felt an almost desperate urge to retrieve those stories—both good and bad—and save them for others.

They were stories of love, violence, hardship, and heartbreak; of forefathers who fought for both the Union and Confederacy, some of whom were buried in Old Prater.

He would write of Hooker Hopkins, who, in the 1950s, was often seen wandering in the cemetery with a lantern late at night, searching for the grave of a baby daughter whose burial place he could not find.

He would remember his uncle Avery who, while dying of Lou Gehrig’s disease, struggled to scribble a note to Bruce that said only, “Get gun. Shoot me.” Of course, Hopkins could not, and he wonders still if his uncle ever forgave him.

In 1997, Hopkins, a former television reporter and English teacher, was shocked to learn that this cemetery, which his family and others held sacred, lay in the path of a planned rerouting of U.S. Highway 460, and that its graves would have to be relocated.

There were spirits in that lonely field on a high mountainside that called to him “as surely as a dinner bell once called men from the cornfields that had disappeared from Greasy Creek,” he says.

His unrelenting, six-year search to recover stories about the 119 he estimated to have been buried there, and his determination to preserve, as best he could, the dignity of their reburial, would eventually lead to his first book, Spirits in the Field, then to Bright Wings to Fly, Hearts in Zion, and his current work in progress, Tell My Father.

“These books are not about money,” insists Hopkins. “They are about preserving stories.”

Moreover, his work reminds us all that much of Kentucky’s richest history has never been written, but lies buried in countless family cemeteries such as Old Prater, on lonesome mountainsides, or in forgotten, overgrown plots in farm fields.

Note: Mr. Hopkins’ books are available through your local bookstore or online.