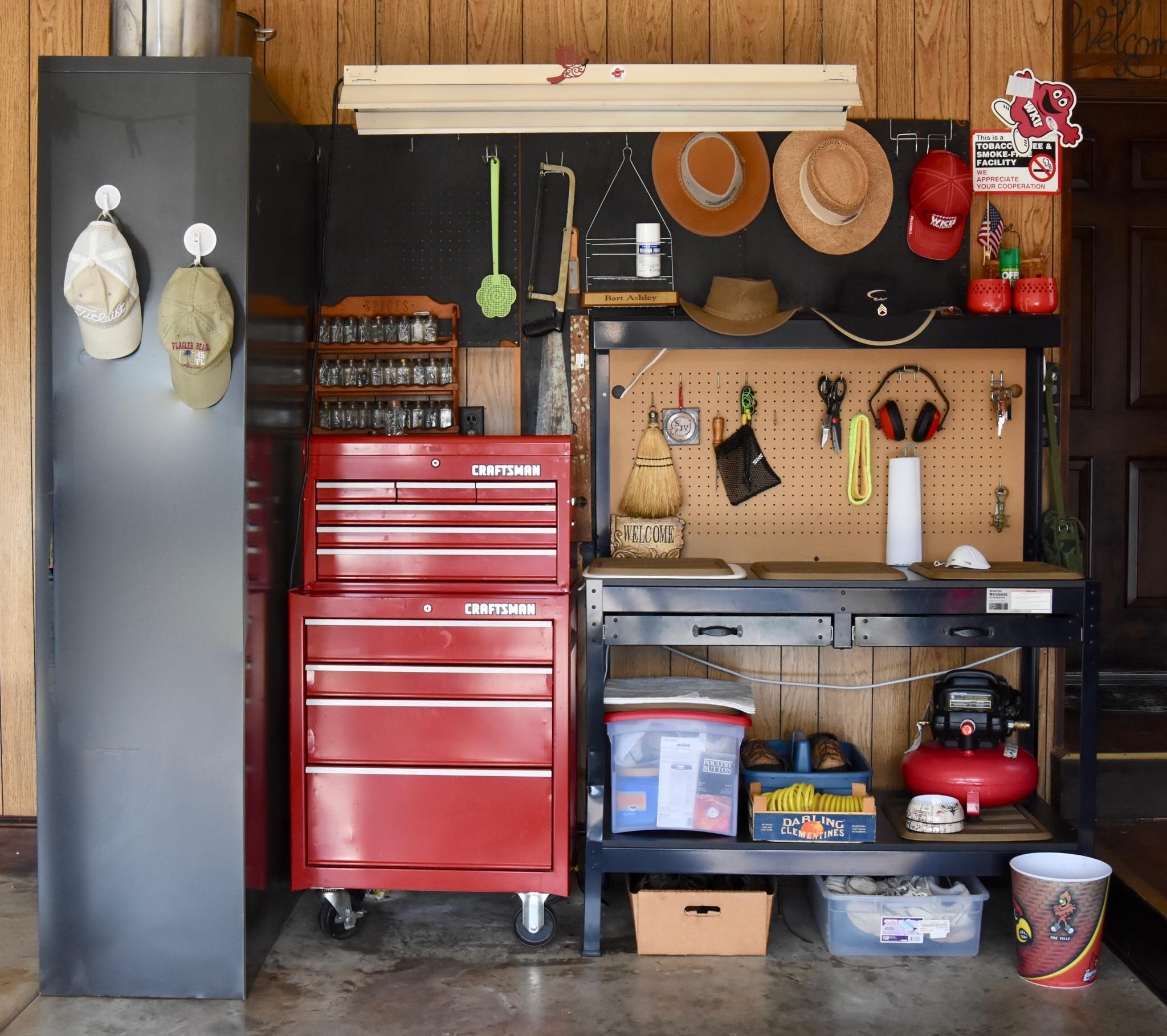 JoAnn Ashley of Alvaton employs all manner of storage methods from the traditional Craftsman chest for tools to former spice containers for screws, bolts and nuts. Photo: Debra Gibson Isaacs

Space-saving and innovative tips to organize your garage

JoAnn Ashley, a retiree with experience in organizing spaces, was working with a woman in Bowling Green who had a garage nightmare: It was literally stacked almost to the ceiling, with only a walkway through to the house door.

The woman was due to move in only two weeks. The moving truck was scheduled, and someone else was moving in the next day, so the winnowing had to be done. But she found it hard to think about the garage, since she was still grieving the loss of her husband three months earlier.

Practical, easy-to-implement, stress-relieving advice that had helped many other clients, she thought.

But after a couple of days, Ashley, a Warren RECC consumer-member from Alvaton, noticed that items she had set up for a yard sale were missing. The sentimental woman Ashley was helping was sneaking back into the garage at night and retrieving items she decided she might need or still wanted, although she knew she would not have room for them after downsizing.

She had run head-on into one of the thorniest issues in organizing multiuse spaces such as garages. It isn’t sorting or sweeping or even putting items in containers: It is the mental battle within, often between sentiment (past memories associated with an item) and reality (what is needed, used and will fit). Then there is the conflict about potential needs: “I might need that someday, and I wouldn’t want to have to buy another one.” Ashley often hears that one.

The basics of organizing a garage are not particularly difficult to understand, most professional organizers say, but that comes with a lot of caveats. You need to be able to make a plan, complete it on deadline, create multiple ways to solve various space problems, get someone to do the hard work of sorting, and understand the best tools and storage devices to get it done.

Then, pick a weekend when you and your family or friends can focus on clearing the garage, turn on some music, and before long your garage will be transformed and tidy.

Beth Wilkerson, owner of Kentuckiana Professional Organizer in Shepherdsville, lays out a plan for her client or works with the client early in the process of organizing a garage, as most organizers do. It’s the equivalent of the adage about measuring twice—be sure you are headed in the right direction before you do something that can’t be undone.

Wilkerson also does a walk-through with the whole family, asking a lot of questions along the way such as, how often do you use this? Who uses it most? Does it require electricity?

Professional organizer Amy Keeling Walton of Bardstown, also known as The Neat Freak, starts with an attitude: “Organize today. Relax tomorrow. When you can find what you want and need, it gives you so much peace.”

Walton borrows from longtime organizing pro Julie Morgenstern, who coined the acronym: SPACE. It stands for:

PURGE With multiples, keep only the best.

ASSIGN the item a home according to how it is used, where, when and how often.

CONTAINERIZE. Wait to buy containers until you see what sizes you actually need.

EQUALIZE or as Walton prefers, Everyday. You have to maintain the order.

“When you’re finished, your garage will not look like a magazine photo,” Walton warns. “You don’t look like your Christmas card picture every day of the week, either. But it will be clean and you will be able to find what you need.”

Ashley Hinzman, owner of The Life Less Cluttered in northern Kentucky, suggests picking a corner of the garage and starting there.

“If you just try to sort the entire garage, it can take a long time,” Hinzman says. “But if your goal is smaller, the satisfaction of accomplishment comes faster. That keeps you motivated to tackle the next corner.”

Ashley tackles the trash first. “This helps not only clean the space,” she says, “but it frees up space for sorting. Get everything out of the way that isn’t garage-worthy.”

Hinzman and Ashley both sort using a three-prong division: keep, donate and throw away. “There are no rules,” Ashley says, “no rights or wrongs about categories. The next step of the sorting is personalizing by identifying types of stuff—tools, lawn and garden, clothes, and sports equipment, etc.”

The sorting process can be done all at once or a little at a time, which eases the pressure. It depends on the volume and whether you have people who can help.

This is where the real decision-making comes.

Ashley asks: “Do you want to be stuck with this or get a little money out of it, even if it’s $2. Better yet, donate it. Be a humanitarian.”

You may even find a few family treasures, she says. If so, consider giving them to a family member who would love them. The item will be able to delight future generations as it is passed down.

Remember the plan you and your organizer developed at the beginning? Now’s the time to pull it out and use it.

“I tell people up front that their garage is going to be different from everybody else’s,” Hinzman says. “We create zones and work collaboratively to put things near where they will wind up. Most people are so overwhelmed at this point—they just see piles of stuff and don’t know where to start.”

This is where a second set of eyes can really help, she says, by having someone else see how the garage could look instead of how it always has been.

Once things are sorted out, it’s also easier to see where items will fit.

Now it’s time to buy those containers you wanted to get before you sorted and decluttered: figure out how many containers you need and what size they should be.

The containers don’t have to be plastic bins—pegboards, shelves or cabinets are also useful in a garage.

One factor to consider, Hinzman says, is whether you want to see what’s in the container at a glance. Colored bins and cabinets with doors may be eye-appealing, but you won’t be able to see what’s inside until you open them.

That’s also why many organizers place a high value on labels. They provide a nice, clean look with a list of what’s stored inside.

According to Morgenstern, “equalize” covers several meanings, including putting items away and maintaining your new, organized space. Walton notes that it takes only 10 seconds to put back an item where it belongs. She offers a dare: The next time you are using something, put it back and count the seconds it takes.

Morgenstern’s equalize concept also encompasses a “one in, one out” rule: If you buy a new item, get rid of the old one to prevent renewing the clutter. You should also reevaluate your organization system periodically to make sure it’s working, and tweak if needed.

“All spaces, including garages, when organized, help the flow of your home,” says Amy Tokos, president-elect of National Association of Productivity and Organizing Professionals. “Studies say that having an organized space is calming. Garages are often the first place you see, entering a home, so having it organized can be a source of transition from the outside world to our home space.”

Staging items for use

If you’re like many homeowners, lots of your “stuff” ends up gathering dust in the garage. In fact, if you’ve had some down time over the past few months, you may have cleaned out rooms in your house and taken unused items to the garage.

But what happens when you need your power drill, your paintbrushes or your holiday decorations? Do you have to dig through those mounds of stuff to find them? Not necessarily: The National Association of Productivity and Organizing Professionals (NAPO.net) has these tips.

• Clearly categorize and store your items in the garage in zones, such as garden, tools, kids, sports, camping and holiday.

• Make sure that the items you use regularly such as bikes, hedge clippers or camp chairs are the most easily accessed.

• Multitask: You’ve dragged your items out of the garage to categorize and purge—this is a perfect time to clean and paint the garage.

People often believe that reorganizing a garage is an expensive task that requires special cabinets or built-ins, but semiretired professional organizer JoAnn Ashley of Alvaton says you can have an organized garage even without high-end cabinets.

Inexpensive fixes include pegboards, a variety of hooks and multiple sizes of color-coded bins—red for Christmas decorations, for example. If you opt for do-it-yourself shelving, beware of using untreated wood, which can rot or attract mold and insect infestations, says Beth Wilkerson, owner of Kentuckiana Professional Organizer in Shepherdsville.

The Kentucky organizers in this story told us to expect to pay around $60 an hour for their services.

If there is one rule about garages it is this: Use vertical space by taking advantage of the ceiling and walls.

Install tall storage shelves to get things off the floor and organize items on shelves by how often you use them: the more an item is used, the lower the shelf it should go on. Bikes, kayaks and life jackets can be hung from hooks. Search online for do-it-yourselfer ideas for making racks that hang shovels, garden tools and brooms.

Mounting and hanging storage units from the ceiling are another option to decluttering the floor. However, first make sure you know how much weight your ceiling can support.

According to RebootMyGarage.com, “Regular garage ceiling joists of modern construction can generally support 50lb/sq ft. … Remember to spread the load across your joists and not along them. Your joists are strongest closest to the wall and weaker towards the middle. Also important is that metal joists will not support the same weight as wood.”

Just like adding pounds if you don’t watch your weight, the garage can rapidly gain clutter if you let it go. One of the most important maintenance issues is putting items back to their original place.

The Neat Freak Professional Organizer Amy Keeling Walton of Bardstown says that it only takes 10 seconds to put back an item where it belongs. She offers a dare: The next time you are using something, put it back and count the seconds it takes.

“We can straighten up the house really quickly,” says The Neat Freak’s Walton although she has three young neat freaks:  Olivia, 17; Alaina, 14; and Adam, 11 “Everything has its place so it is a matter of putting it back in that space. “Our kids could clean up their playroom really well when they were young because everything went in a basket or bin.”