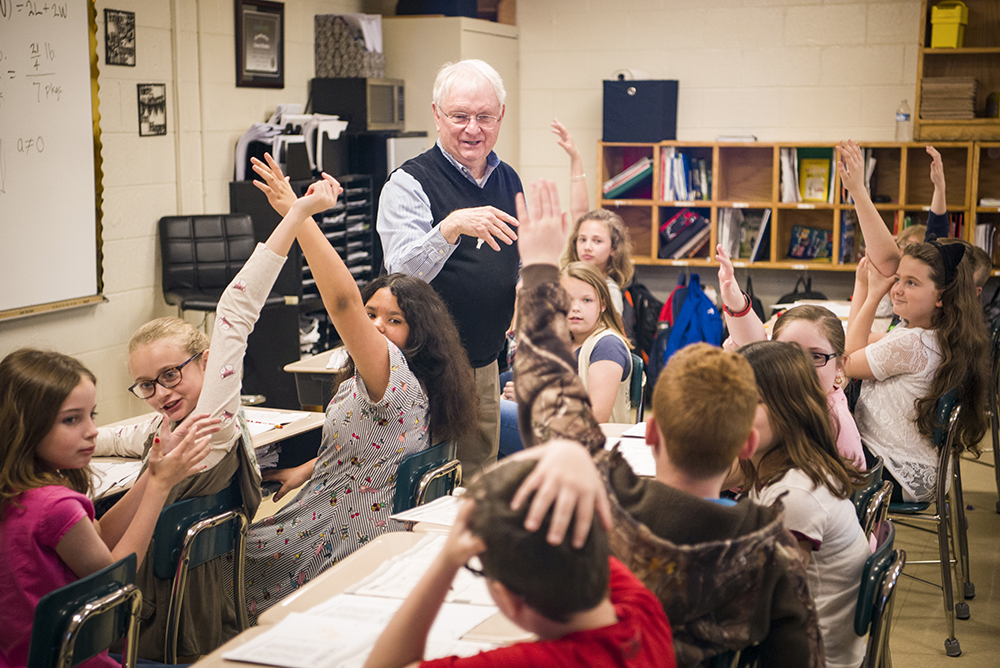 A banner in the lobby of Sublimity Elementary School highlights state test scores for the Laurel County school, rising from 110th in Kentucky in 2016 to 21st in 2018.

Principal Kristina Thomas zeroes in on an even more impressive statistic. In 2018, the school’s fourth grade math students were ranked fourth in the state, behind three private schools. “We were the No. 1 public school for fourth grade math,” she says proudly.

Thomas credits much of that success to 79-year-old retired teacher Don White, who began working with teachers at the school in 2016. White turns a nontraditional—and often spontaneous—style of teaching into educational success. He calls it ClearMath.

Thomas says she knew the math scores were phenomenal when she took over her post a year ago. She had heard about White’s work and went to observe him in the classroom. “I was shocked to see this style of teaching produce these numbers,” she says.

White’s gray hair is overshadowed by his enthusiasm as he works with Sublimity fourth grade teacher Lauren Wombles. She reads a word problem asking students to find the weight of seven packages of jelly beans.

That’s when White takes over and the room is quickly saturated with dialogue. He fires questions at the students. They eagerly raise their hands, with answers like “units,” “forms of 1,” and “equivalence.” Soon the specific problem is seen in general terms and the problem is solved, with the answer arrived at through conversation. Thus, algebra is used in the fourth grade.

White, who is a Jackson Energy Cooperative member, describes his approach as “making the lesson fit the student, instead of making the student fit the lesson.” His first step is to test and find out what the students don’t know. He then develops lessons for the class. White says it’s the opposite of traditional teaching methods, which emphasize lessons first and then the test.

“So many kids know how to use a saw and hammer,” he adds, “but can they build a house? ClearMath teaches the house building upfront—i.e., critical thinking and problem solving.”

White stresses that ClearMath is not about him, but is “a contextual method of teaching which can be learned and used by others.” ClearMath’s success has led White to develop an internship for teachers in the school district. Instructors work with White for two years and earn a certificate from him for demonstrating their proficiency in the method, tackling topics such as “Math as a Language.”

London Elementary’s Meredith Chandler was one of the first to complete the program. She describes herself as a “rote teacher” before the internship who has since “reinvented” herself as an instructor. “I can teach more in-depth, covering more content in less time,” Chandler says.

“When teachers are passionate about their craft, students become passionate learners,” she adds.

White is working to help other teachers and schools benefit from the program. He has trademarked his ClearMath concept and has formed a nonprofit company to promote the teaching method. For more information, visit www.clearmath.org or email White at donwhite@clearmath.org.