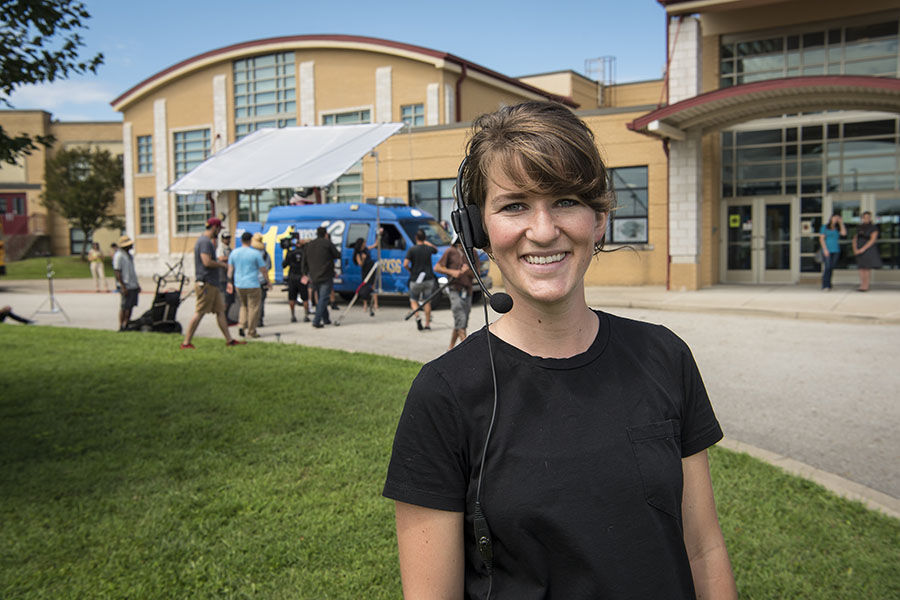 Tax breaks, diverse locations have filmmakers flocking to Kentucky Far from the palm trees of Hollywood Boulevard or the bright lights of Broadway, a production crew is working through the night. Extras mill around. The food truck idles on the edge of the set. Actors listen as the director gives them instructions for what he wants on this last scene. They begin to film, and it’s completed in one shot. That’s a wrap.

“Economically, I recommend that every small town get a movie,” jokes Stephanie McMillin, executive director of the Springfield Tourism Commission, about her town’s 22-day hosting of the production of Tragedy Girls.

Starring Alexandra Shipp, Brianna Hildebrand, and Kentucky native Josh Hutcherson, Tragedy Girls is a story about “two death-obsessed teenage girls who use their online show about real-life tragedies to send their small Midwestern town into a frenzy,” according to International Movie Database.

During the first week of July 2016, a film location scout contacted McMillin on a Monday with a laundry list of places he needed for an upcoming movie: a covered bridge, a country road, a downtown area, a school.

The scout came to Springfield on Tuesday, taking pictures and making extensive notes during a tour of the area. That night, he contacted the Los Angeles producers of Tragedy Girls, who were interested. The next morning, they were on a plane to Kentucky. Another group of producers showed up on Thursday.

“We got the phone call on Friday. They said, ‘We’d like to film in your town,’” says McMillin.

“We have one hotel in town and it was at maximum capacity. The city put the word out to local Realtors and people rented their houses to the cast and crew,” McMillin says. “A portion of our main shopping center had been vacant for a couple of years, and the production company rented it, too.”

What’s the incentive?
Why did the production company for Tragedy Girls choose Springfield? The city fit the script and its residents were supportive, but the new Kentucky film tax incentives also were a factor, says Jay Hall, deputy commissioner of the state Department of Travel and Tourism.

Since film tax credits were expanded by the 2015 Kentucky Legislature, 66 films have been approved to be shot on location in Kentucky. Hall, who manages the incentive program, has been overwhelmed with the positive response from filmmakers and producers.

“I’ve read more scripts in the last eight months than I’ve seen movies in the last eight years,” says Hall. Filmmakers fill out their application online and submit a script. Hall and his staff review both. If a film meets the incentive program criteria, the application is passed on to the Kentucky Tourism Development Finance Authority, a nine-member board that reviews and approves the projects. Once approved, the filmmakers have two years to begin production and four years to finish.

After securing financing, the production companies scout for a location. “If they contact our office, we refer them to a list of locations, and invite our tourism folks across the state to find locations that match what the production company needs,” Hall says. “And the great thing is, Kentucky has everything—caves, waterfalls, inland waterways, mountains, countrysides; we’ve got it all.”

To be eligible for the tax incentives, the production companies must spend a portion of their budget in that community, so every business in Springfield got a big boost, from security guards to caterers, and drivers to lodging. Local thrift stores were being combed daily for costumes, while the restaurants were packed, and local hardware stores got a beating. In addition to keeping the town’s businesses hopping, the producers held open seminars to educate anyone interested in the film industry and discussed the many job opportunities available for electricians, mechanics, truck drivers, accountants, sound crews, construction workers, and hair and makeup stylists.

“I would tell, and already have, any other filmmakers that Kentucky is a wonderful place to shoot. A great incentive, great people, and beautiful locations.”

Kentucky filmmakers always have known that the commonwealth is the best-kept secret in the business. “The circuit of independent artists is strong, so I believe a boom in local filmmaking has already occurred,” says P.J. Starks, independent filmmaker from Owensboro. “Now with the emergence of these incentives, it’s something to definitely be excited about, whether you plan to take advantage of them or not.”

Jason Epperson, a Kentucky filmmaker, member of the Kentucky Film Commission, and owner of Eppic Films, agrees. “The buzz has already started. Filmmakers are interested in Kentucky, and they want to come here.

“We need people who are interested in the industry not to leave Kentucky, but stay here and grow the talent pool for crew and actors,” he says.

The extras and local crew for the Springfield film will not soon forget the experience. The local theater community was out in force, filming several scenes in the middle of Main Street from 2 p.m. to 2 a.m.

“I’m sure a kid in LA sees this all the time, but our kids don’t. They got to see firsthand how movie magic was made,” says McMillin.

Whether it was hot or raining or in the middle of the night, the hundreds of extras from Springfield and surrounding towns loved every minute of it, and the production company was thrilled with the support and the energy of the town.

“We chose to shoot in Springfield because the town fit the look of our film and because the city and its administrators were so friendly and excited about having us,” Tragedy Girls producer Cameron Van Hoy says. “I would tell, and already have, any other filmmakers that Kentucky is a wonderful place to shoot. A great incentive, great people, and beautiful locations.”

Reeling them in
When a production crew leaves the commonwealth, the economic benefits don’t always end there. Tourism officials hope the cinematic sight of some Kentucky spots will resonate with moviegoers and inspire them to visit in person. Read about the nifty turnkey business that the Tragedy Girls production company, left for the town of Springfield.