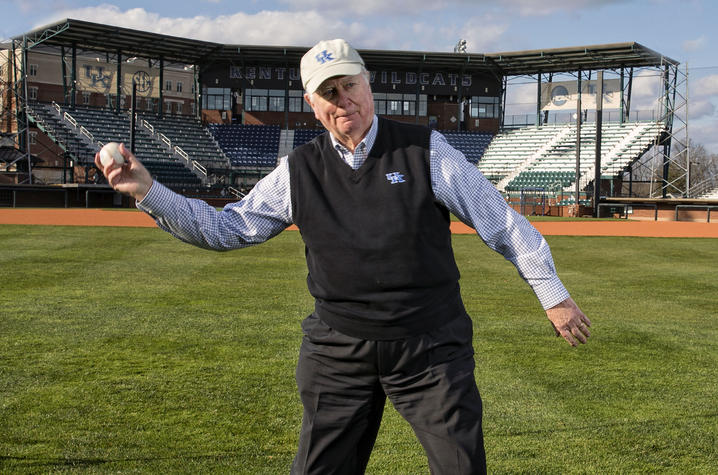 LEXINGTON (March 9, 2017)—It is fitting that the man many consider the pioneer of marketing for college athletics also began his educational career as a pioneer.

Jim Host is known throughout the country as the founder of Host Communications, a successful college sports marketing and association management company. Growing up in Ashland, Kentucky, in the mid 1950s, he chose University of Kentucky when Harry Lancaster, the head baseball coach, approached him with an offer he couldn’t refuse.

“He came up and said, ‘Jim, I’d like to offer you one of the first two full scholarships given at Kentucky in baseball,'” Host said. “Of course, it was a dream to be able to come to Kentucky!”

Host turned down an offer to play professional baseball right out of high school to become the first in his family to attend college. It was a move that would lay the foundation for a career as a trailblazer in the field of collegiate sports marketing.

“There are not many people who can say they created an entire industry,” said Michael Smith, staff writer for college athletics at SportsBusiness Journal/Daily. “No one is more responsible for the development of collegiate marketing than Jim Host.”

Before entering the marketing world, Host studied radio and television in what is now UK’s College of Communication and Information. He says he enjoyed the classes and his professors, most notably Kentucky Educational Television’s (KET) Len Press. But an opportunity to do play-by-play for UK basketball games afforded him experience the textbooks could not offer.

Upon graduation, Host played professional baseball before returning to the Commonwealth to pick up where he left off on the radio—this time for the Kentucky Central Network, one of five radio networks broadcasting UK games.

“I packed my own equipment, did my own color, my own play-by-play, my own statistics, and my own spotting, everything by myself,” Host said. “I started doing that in 1959 and the rest, as they say, is history.”

From there, he worked in insurance, real estate, sales, and eventually politics.

“I was one of the youngest cabinet officers, running a department of public information which was responsible for tourism and economic development and promotion of the state,” Host said. “I was also doubling at times as a press secretary and a lot of other duties for Gov. (Louie B.) Nunn.”

It wasn’t until the aftermath of an unsuccessful campaign to become lieutenant governor that the foundation for Host Communications was laid. He says he owed money and had only $107 left in the bank, so he asked to use an apartment above Ray’s Barbershop in Lexington’s Chevy Chase neighborhood as an office.

“I used the barbershop’s pay telephone as an office phone because I didn’t want to install a phone in my office,” Host said. “From that beginning, I started building my company and that’s how it all began.”

“It started as Jim Host and Associates because I didn’t have any associates, but I wanted to make it sound like a big company,” Host said.

Slowly but surely that began to change as he began promoting Lexington and eventually acquired the exclusive radio rights to broadcast his alma mater’s games.

“When I was growing up, there were five different broadcasts of UK football and especially basketball,” said Tom Hammond, Host’s friend and former colleague. “If UK received any revenue from all those outlets, it was minimal. So, when Host put together a deal to do the UK Network and paid UK a rights fee, it was groundbreaking!”

“He built the UK Radio Network into one of the biggest college radio networks in the country,” said Tom Jernstedt, a longtime friend who worked with Host during a long career with the NCAA. “He was ahead of his time in the way he put it together, it was state-of-the-art.”

The network’s success paved the way for Host to move from the university level to the national playing field.

“He would later add marketing, other universities, and the NCAA itself to his portfolio,” Hammond said.

“He was the pioneer who convinced the NCAA to have a national radio network,” said Rick Jones, a friend and former colleague.

That move led to more national connections in the world of college athletics. Once the connections were made, Host’s ideas gained even more traction.

“He had the creativity to create an industry that did not exist before that time,” said Tom Stultz, another friend and colleague of Jim Host.

“Jim was blessed with an uncanny vision,” said Bob Vecchione, executive director of the National Association of Collegiate Directors of Athletics (NACDA). “He was able to foresee how ideas and trends would play out years down the road, and he used his infectious enthusiasm to make others believe it!”

Host is also credited with helping to secure the first corporate partner of the NCAA Tournament, Gillette, in the mid 1980s.

“Jim challenged the notion that college athletics would compromise its soul if it introduced a commercial component,” Smith said. “He was told over and over again that corporate sponsorships had no place in college athletics, but he simply wouldn’t take no for an answer.”

“He had a unique perspective from the personal experience of being a student-athlete as well as a business perspective,” said Jim Dinkins, chief retail sales officer for Coca-Cola North America.

Host said he ran his business by emphasizing the importance of always doing the right thing.

“I had two rules in my business,” Host said. “Do not lie or misrepresent about anything. Do not steal 5 cents from the expense account. Those things denote integrity and character.”

Ultimately, the combination of his business and personal perspectives transformed the way colleges and universities operated.

“He’s a pioneer whose innovation and entrepreneurial spirit led to the formation of the NCAA’s corporate sponsorship program, which now is responsible for generating millions of dollars to support the student-athletes and their programs,” Smith said.

It is that direct student impact that seems to mean the most to Host today.

“I think the thing that I’m probably most proud of is being able to develop revenue to give kids more of an opportunity at universities to go to school and get scholarships,” Host said.

The other thing he is most proud of? A long history of working with students at the universities his company represented.

“I take great pride in how many students we trained and how many different universities in which we had relationships,” Host said.

“I got to learn and observe from a master,” said Thompson, CEO of MELT, a sports and entertainment marketing firm in Atlanta. “I went from wanting to be a sports writer to developing a passion for sports marketing. He was the axis of my career path, and he doesn’t even know it. That is the mark of a pioneer.”

Despite being known as a trailblazer, despite the accolades and accomplishments, despite the numerous awards adorning the walls of his office, when Host reflects on his career, he says the thing he treasures most isn’t a thing at all. It’s the people.

“The memories of all the great broadcasters I’ve worked with, all the great people and coaches that I’ve met, all of the relationships that I’ve developed over the years have meant more than whatever little money I have,” Host said.

It is a lesson he has successfully passed along to others.

“Jim has taught me so much,” Vecchione said, “but what I have passed down to my children is the value and importance of interpersonal relationships. At the end of the day, no matter how technologically advanced the world becomes, people do business with people.”

That is why, when you ask former colleagues and friends to talk about Jim Host, their descriptions go beyond his career milestones.

“He’s a great human being, a great Kentuckian, a great friend, a great husband, a great father, and a great leader,” said former SEC Commissioner Mike Slive. “The great state of Kentucky can have no finer representative than Jim Host.”

Watch the video below to learn more about how the University of Kentucky helped pave the way for Host’s groundbreaking career.