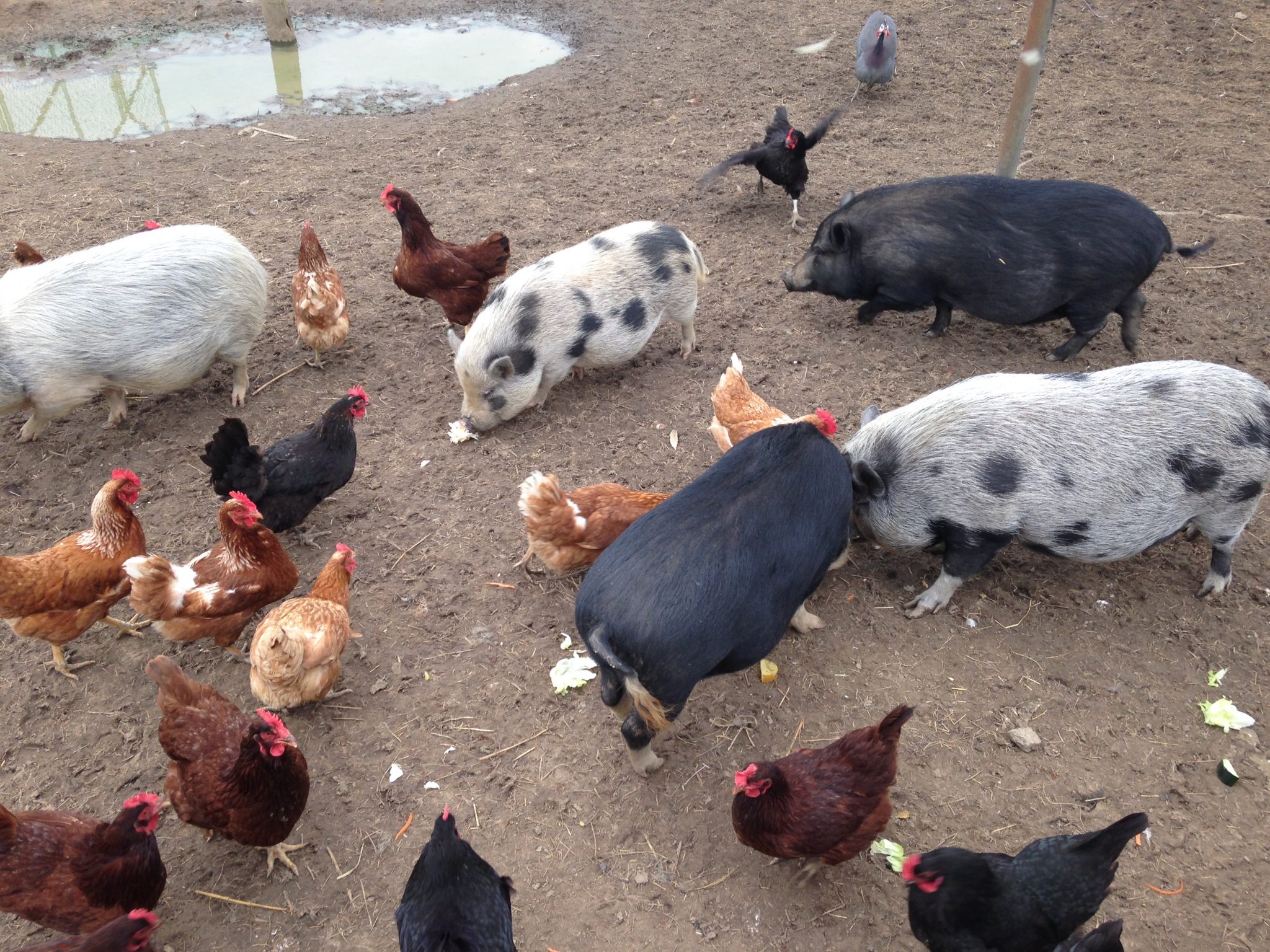 The Mafia is alive and well in Kentucky. I know, because I was accosted by 20 members of this group. After demanding all my celery and a few kisses, they let me go. I was lucky.

To clarify, these were members of the Pig Rescue Mafia, or PRM. And they were, indeed, pigs. More specifically, rescued pigs taken in by the organization based in Georgetown.

“I didn’t know anything about caring for pigs at the time,” she says. “but I learned from a group of people I found on the internet, long before Facebook existed.”

As Hildi began networking with other people who also loved pigs, she reached out for pig fosters. She came across a woman named Jodi, who now fosters 22 pigs on her farm in Pendleton County, near Butler.

At nearly 200 acres, except for the hay fields, it’s obvious this place belongs to the pigs. They are in the yards, the fields, the barn, the house, and one or two in the bed. Jodi and husband Roger have devoted themselves to caring for unwanted pigs who otherwise may have led miserable lives, or no life at all.

“I started fostering with a smelly, squealing pot-belly named Josie, who’d seen her mother slaughtered,” Jodi says. “She still fears people, she only lets me and Roger touch her.”

Jodi already had a pig, Millie, who basically raised Josie. Josie was living in deplorable conditions, and arrived at Jodi’s covered in blood and mud. Millie took it upon herself to teach Josie how to be a pig, how to interact with people, and what the rules were at this rescue.

Jodi notes that PRM takes in pigs that people are rehoming, but she only takes them herself when it’s an emergency. So where do these pigs come from? More and more, they are showing up in shelters across the state. Turns out, many people who can’t resist a small, cute animal aren’t prepared to learn how to care for them as they grow up; in addition, they buy pigs from irresponsible breeders.

“Pigs are dying left and right,” Jodi, 48, adamantly says. “We’re heading toward pig mills like we have puppy mills. The sows are overbred, inbred, tossed out when they can no longer breed, the babies are taken away at birth. The result is sick pigs that never learn to socialize, never learn how to be a pig.”

As Jodi moves around the kitchen, Harley, a large pot-belly, is her constant companion: he knows lunch is coming. The pigs eat pellets in the morning and at night, but for lunch the kitchen is filled with containers of celery, Romaine lettuce, fruit, Cheerios, and peanut butter.

As she prepares lunch, she talks about her relationship with Tranq, who she deeply loves.

“Tranq has been my therapy pig since Atticus died,” she says. She cries as she recalls the pig that recently passed away.

“His adopters didn’t care for him well,” she says. “He was thin, and he came here with fractures in his leg. The leg finally broke, the result of a combination of bad genetics and the wrong food.”

Many dollars later, spent at Ohio State University with the help of donations, the leg was starting to show improvement—until his stressed opposite leg showed another fracture. Atticus would never completely heal, and Jodi had to make the decision no animal lover wants to make.

“For him, it was best. For me, it wasn’t,” she says with eyes full of tears. “I’ve never hurt like this. I was with him 24/7. I was his third home. All he ever wanted was love.” Jodi hides her face as she reaches down to scratch Harley’s back.

As Jodi heads through the yard to the barn, she is followed by her many charges of pigs, guineas, chickens, turkeys, ducks, and goats. There is a lot of love here, love that has replaced what these pigs have previously endured. Porky and Sally were rescued from a neglected home where they were locked in a pen with waste that came up to their bellies. Jethro was picked up by Animal Control, and his owners decided not to take him back. And there’s Tranq, who’s still very skittish about being integrated with the other pigs. And did we mention the six babies born to Sally soon after she arrived at PRM?

Pigs have become enormously popular as pets lately, and in the beginning, they seemed like the perfect pet: they’re clean and neat, don’t need a lot of food, they come in so-called “mini” sizes, generally don’t need the vaccinations a dog requires, don’t smell, and are resistant to fleas and ticks.

So why are so many pigs being abandoned, neglected, and ending up in shelters? Jodi sighs: the reasons are many.

People and breeders are both to blame, she explains. As often happens with dogs, people don’t do their research before getting a pig, and only later realize they took on more than they could handle.

“I had a lot to learn myself about pigs,” she notes. “I had to learn how to ‘be’ a pig. I learned to worm them, clean their teeth, trim their hooves. I give them room to roam and root. I teach them to earn a treat with reward training rather than just hand them out. I feed them the right foods, in the right amount. Pigs can live up to 20 years, and it’s like having a toddler for 20 years—people don’t realize that.”

And again, as has happened with so-called “designer dogs,” breeders have discovered how to make thousands of dollars and create a multitude of problems by breeding and selling pigs.

Jodi explains that some breeders will tell you to only feed a pig a small amount of food, and it will stay small: it’s a tactic to sell what’s advertised as “mini” pigs. But that’s no guarantee: Jodi knows of many 35-pound piglets that turned into 200-pound adults.

“In fact,” she adds, “the smaller a pig is when you buy it, the younger it probably is: breeders will lie about the age and the pigs don’t always survive away from their mother.

“And you’ve got to learn how to handle a pig. They take a lot of time, work, and patience. They train more easily than a dog, but they also like to be in control. And they must be spayed and

neutered, or you have a whole new set of problems to deal with. Pigs need rules, boundaries, a schedule: they do not like a change in routine.”

What Jodi finds particularly heartbreaking are the pigs that don’t work out, and have to be rehomed.

“People need to realize how important it is to raise a pig properly: pigs get very attached, and if you rehome a pig, it may die: they can grieve themselves to death.”

Thankfully the pigs at PRM have a bright future. If adopted, it will be only after a stringent adoption process to ensure a good fit. And if they aren’t adopted, they will live out their lives with Hildi, Jodi, and other fosters.

As Harley, who rarely leaves Jodi’s side, follows her into the house, you can’t help but think: he knows he’ll always be cared for.