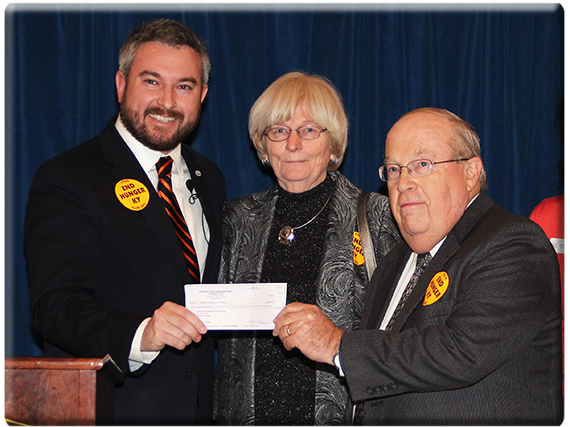 Bonnie Jolly, center, executive director of the Kentucky Pork Producers Association, and KPPA President Dennis Liptrap, right, donated a check for $5,000 from the KPPA to the Kentucky Association of Food Banks for purchasing pork products for distribution by KAFB member organizations. Agriculture Commissioner Ryan Quarles is at left. (Kentucky Department of Agriculture photo)

FRANKFORT, Ky. — Agriculture Commissioner Ryan Quarles gave an update of the Kentucky Department of Agriculture’s (KDA’s) Hunger Initiative and urged all Kentuckians to help fight hunger in a rally to raise awareness of Kentucky’s hunger problem today in the Capitol Rotunda.

“The Kentucky Hunger Initiative got off to a great start in 2016, and we are continuing our efforts to develop a strategy to reduce hunger in Kentucky,” Commissioner Quarles said at the annual Rally to Solve Hunger. “I hope everyone will join me in donating part of their state income tax refund to the Farms to Food Banks Trust Fund and look for ways in your communities to help our fellow Kentuckians gain access to fresh, nutritious foods.”

Every Kentucky taxpayer who receives an income tax refund can check a box on their tax return to designate part of the refund to go to the Kentucky Farms to Food Banks Trust Fund. Taxpayers also can donate directly to the trust fund. The trust fund is administered by the KDA.

During the rally, Commissioner Quarles announced that the Kentucky Pork Producers Association (KPPA) has donated $5,000 to the Kentucky Association of Food Banks (KAFB) for purchasing pork products for distribution by KAFB member organizations.

“The KPPA and its members are active participants in the fight against hunger, from their work with the Hunger Initiative to this generous gift to Kentucky’s food banks,” Commissioner Quarles said. “We deeply appreciate their kindness, and we will continue to work together to reduce hunger in Kentucky.”

“We believe no Kentuckian should ever have to wonder where their next meal is coming from,” said KPPA Executive Director Bonnie Jolly. “The KPPA board fully supports the efforts of Commissioner Quarles and the KAFB to help Kentucky’s hungry.”

“We are grateful for the generosity of KPPA and their commitment to taking action against hunger,” said KAFB Executive Director Tamara Sandberg. “The donation will enable the distribution of enough pork for more than 11,000 meals for our struggling neighbors who can’t always afford nutritious protein.”

Commissioner Quarles launched the first-of-its-kind Kentucky Hunger Initiative and formed the task force last spring to bring together farmers, businesses, charitable organizations, faith groups, community leaders, government entities, and others to study food insecurity in Kentucky and take an inventory of the resources that can be utilized against the problem.

Map the Meal Gap 2016, an annual study by Feeding America, revealed that one in every six Kentuckians–including one in five children–was food insecure in 2014, meaning that consistent access to adequate food is limited by a lack of money and other resources at times during the year.

Kentucky organizations that serve the hungry fed an estimated 58 million meals to approximately 611,000 Kentuckians in 2016.

To find out more about the Kentucky Hunger Initiative, go to kyagr.com/hunger.