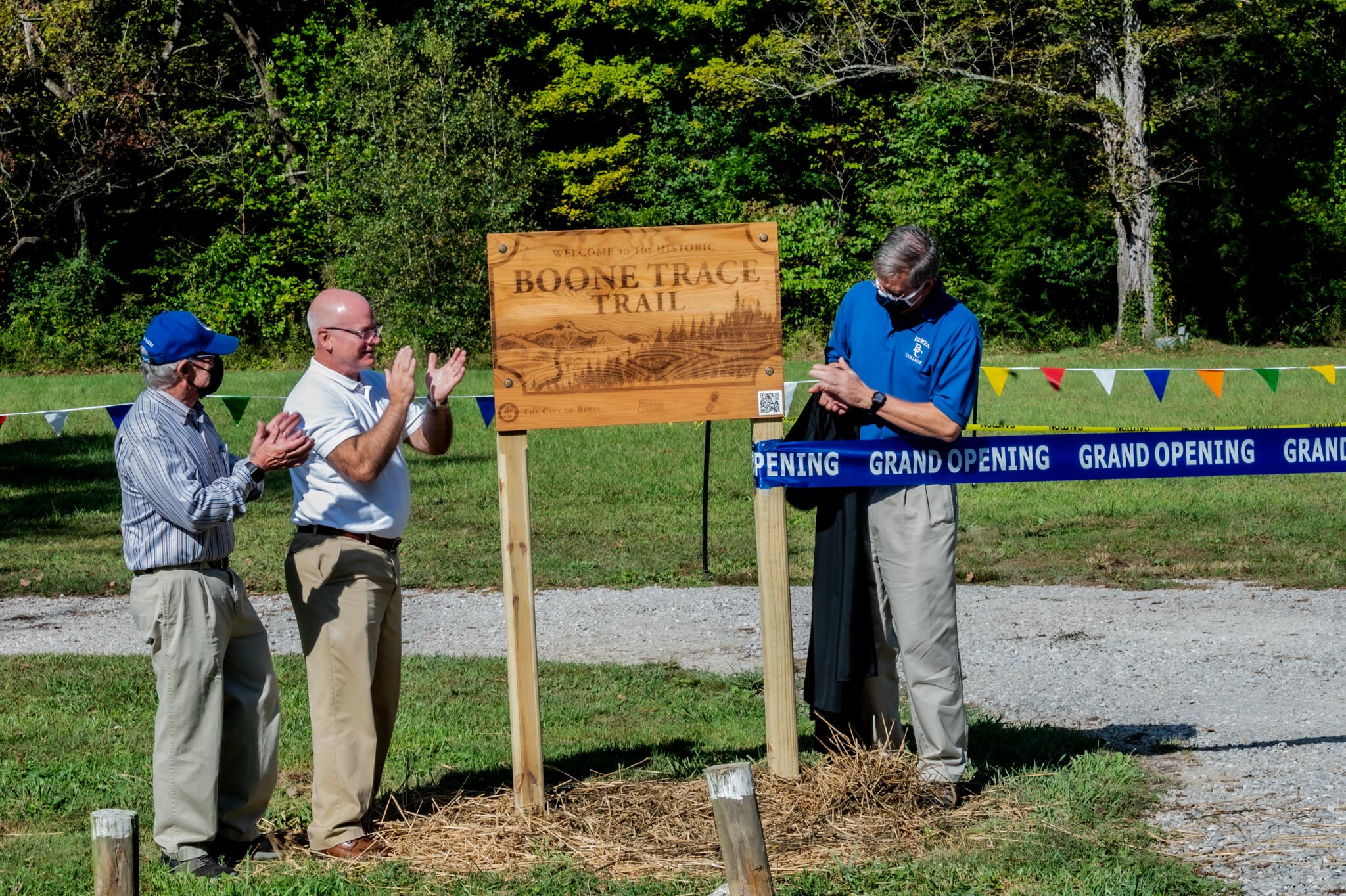 Dr. John Fox, Berea Mayor Bruce Fraley and Berea College President Lyle Roelofs unveil a sign marking Boone Trace Trail at Brushy Fork Park. The sign was made by Berea College Student Crafts. The trail is said to be the path that Daniel Boone took through the area in 1775. - Photo by Gaston Jarju / Berea College

Visitors to Berea College’s Brushy Fork can now walk along the path blazed through Kentucky by Daniel Boone and his axemen, thanks to a collaboration between Berea College and the city of Berea.

Boone Trace Trail is open to Berea residents, students and visitors, with a rock-paved ¾-mile trail that lines up almost exactly with the path Boone and his team took in 1775 from North Carolina through the Cumberland Gap and on to Boonesborough.

The collaborative project has been two years in the making. Berea College granted an easement to the city for parking areas and the shared-use trail along Brushy Fork Creek. The Berea Tourism Commission provided funding for the materials used to create the gravel path. Berea’s Public Works team constructed the trail, which was dedicated Sept. 18.

“A couple of years ago, we dreamed of what could be with a city of Berea and Berea College joint project along the historic Boone Trace through the Berea College Forest, and today, it has become a reality,” said Berea Mayor Bruce Fraley. “I think it is fitting that we celebrate that relationship that continues to grow every day, every month and every year. Thank you to Berea College for allowing this to happen. It’s a great joint project that hopefully is a sign of more collaborative efforts in the future.”

Berea College President Lyle Roelofs said he first thought about the possibility of a trail along Brushy Fork Creek four years ago during a trip to Sweden, where he saw that the banks of all their streams were bordered by walking, running and cycling trails. It was at that point Roelofs thought of creating similar paths. He said with its history, the path takes on a significance greater than just a place for recreation and exercise.

“Almost 100 years before Berea College was first imagined by the Rev. John Fee, that first party came through here and developed a safe and traversable path from North Carolina to Boonesborough,” said President Roelofs. “It has taken a lot of work, but it is worthwhile. We are delighted we can name our trail Boone Trace Trail to mark its historical significance. Thank you to the city of Berea for your good support for this project.”

Berea College Student Crafts made the trail’s new sign, which was designed by the college’s Marketing and Communications Department.

Marking the entire trail taken by Boone is an ongoing project being undertaken by Dr. John Fox, a retired surgeon who is working to save and preserve Boone Trace. Dr. Fox says he plans to dedicate a good portion of the remainder of his life to this project.