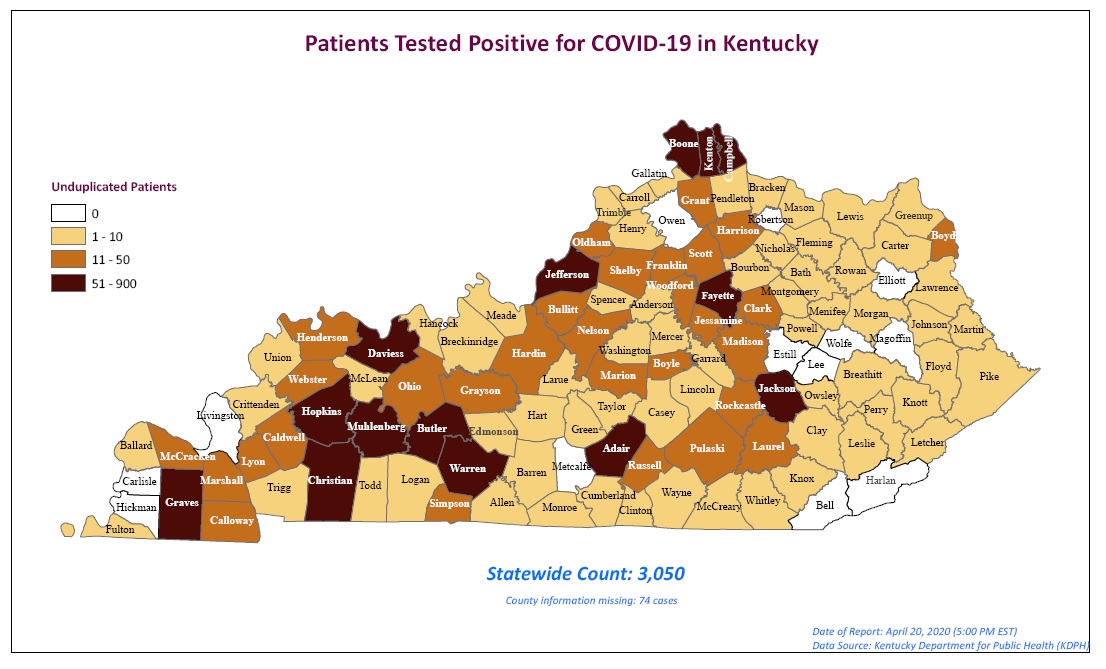 “Every health care professional has advised us that this is the right course of action to take,” the Governor said of the state’s continuing efforts to stop the spread of the novel coronavirus 2019 (COVID-19).

Gov. Beshear noted that same advice was being followed in many states, including Ohio, Indiana and Tennessee.

He said the move is in line with newly released guidelines from the White House as well as Kentucky’s own newly announced benchmarks that the commonwealth must meet in order to start reopening the state’s economy while keeping Kentuckians safe from the novel coronavirus.

“I know for many this is hard,” the Governor said. “We have seniors that were looking forward to an in-person graduation and a prom. I’ve got a son who’s graduating from elementary school and we have every student out there who has lost this time to be able to be with their classmates and there for in-person instruction.”

He said schools were being asked to continue nontraditional instruction and food service for students in need.

“This is something I think our superintendents were expecting and were planning on,” Gov. Beshear said. “They’ve provided great leadership, and I know that they will continue.”

The Governor said he understood the disappointment many were feeling but said it was part of the many sacrifices Kentuckians are making in the coronavirus fight.

“It’s not fair, it’s not. But a worldwide pandemic has hit us and those of you who are missing out on these opportunities, we need your help and we need your sacrifice,” he said. “Ultimately, the experience you are losing is hard, but your willingness to do it is going to help us save lives.”

Lt. Gov. Jacqueline Coleman, who is also secretary of the Education and Workforce Development Cabinet, appeared Monday via video link to offer an update on unemployment as the state continues to process an unprecedented amount of claims and payments.

She said on average the state is seeing about 13,000 new claims per day, as officials continue to staff up.

“We are continuing to process an unprecedented amount of unemployment insurance claims and payments,” Lt. Gov. Coleman said. “We have processed twice as many claims since March 8 as we did in all of 2019.”

She urged those seeking benefits not to reapply and not to open a new claim if they have already applied.

The only people who need to reopen a claim are those requesting an additional 13 weeks because the original benefits have expired.

A new technology team is working to address the delays, and more than 1,000 new workers have been hired and trained to handle calls.

Lt. Gov. Coleman said a particular focus will be taking care of anyone whose claim has been hung up for more than two weeks.

People in and around the communities of Madisonville, Paducah, Somerset and Pikeville can sign up for testing that begins later this week.

Those seeking to obtain a test can get location and registration details at The Little Clinic website.

“We’re thinking about these families,” the Governor said. “We’re going to continue to light our homes up green to let them know they are not alone, to show the color of compassion and renewal.”

He said a Kentucky State Police Honor Guard will mark the losses Tuesday during a wreath-laying ceremony in the Capitol Rotunda.

“Tomorrow, we are going to do a presentation of wreaths here at the Capitol in honor of the more than 150 Kentuckians lost,” the Governor said. He said he will show the video during the briefing at 5 p.m. Tuesday.

Gov. Beshear also highlighted the death of William Dean Smith of Leitchfield. The 94-year-old former music teacher also was a war hero, having served in both World War II and the Korean War, according to a remembrance written by Ken Howlett of K105. He became Grayson County’s first coronavirus fatality.

“Tonight, we lift up William, his family, his community in Grayson County and beyond, and recognize what a profound loss this is,” Gov. Beshear said. “This should reinforce our resolve to do our best every day to protect those around us. We’ve now lost at least a couple of war heroes. Let’s make sure we’re doing our part. Let’s make sure we’re living up to the example that his generation set for us. Let’s make sure that we protect people from this virus.”

At least 1,144 people have recovered from COVID-19 in Kentucky. Gov. Beshear said this was great news and that about 37.51% of Kentuckians with the virus have recovered.

At least 532 have ever been in the ICU with at least 147 people currently in the ICU.