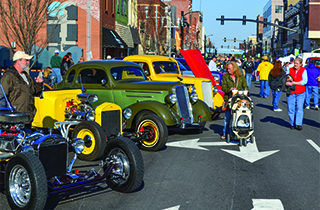 Our fascination with “wonders on wheels” creates enduring friendships—with people and cars alike—as they allow us the freedom to marvel at their shiny coat, drive scenic byways, and dream the summer away.

If you think of the car in your driveway as little more than a way to get from place to place, there are folks all over Kentucky who’ll say you’re missing something. They’re car people, and to them, the car is a work of engineering art, a conversation piece, an eternal puzzle, and a vehicle for much more than just transportation.

Case in point: the Mustang Mafia. Don’t be put off by the name, Doug Baker and his late wife Cynthia liked the sound of it when they founded the group in 2005. Their Web site (www.themustangmafia.com) declares, “The Mustang Mafia Car Club is dedicated to the preservation and the love of the Mustang and the Spirit of Friendship.”

Based in Burnside, the group has held races at the drag strips in Jamestown and London, Kentucky, and members frequently join the legendary Somernites Cruise in nearby Somerset. Membership stands at about 100, says Doug, who belongs to South Kentucky Rural Electric Cooperative, and they’ve welcomed membership requests from all over the country as well as Australia and France.

Part of the appeal of model-specific car clubs like this is that members like to study one another’s approach to customization. At gatherings, they slide in and out of each other’s Mustangs, examining the interiors and glancing under hoods like home cooks sampling recipes at a chili cook-off. “Each person’s Mustang is different,” Doug says. “It’s a way to express your personality. That’s what car people do.”

Another thing car people sometimes do: struggle to answer a seemingly obvious question, like, “How many cars do you own?”

Casey Jones, who lives near Paintsville, takes a moment to both count and define his inventory. “Roughly 10,” he says. “Some are really projects.” This means he has collections of parts that may not be whole or functional enough to truly be called a car. Yet even when he’s assembled them into a vehicle that’s complete down to the upholstery, he keeps tinkering.

Jones, a member of Big Sandy Rural Electric Cooperative, is the president of the East Kentucky Gearheads Car Club. The club partners with Paintsville Tourism to sponsor the Paintsville Cruiz’n every third Saturday from May to September. The cruise has grown from 22 cars at its debut in 2007 to more than 200 per outing last year. East Kentucky Gearheads takes the money it raises from events like that and the annual Ride with a Pal cruise (held in Prestonsburg the second Saturday in August), and purchases handicapped-accessible playground equipment for area public parks. One popular feature of the Paintsville Cruiz’n is Primer Alley, a section of the event devoted to car lovers who want to compare notes and techniques. “All cars are welcome,” Jones says. “Lead sleds, chop tops, rat rods.”

The cooperative spirit of car club culture helps make these events attractive to many communities. In 2013, after a successful inaugural 2012 Downtown Cruise-In season, the City of Owensboro partnered with Sunset Cruisers, a local car club, to get a larger group involved to help promote and manage the event. The first Saturday of the month from April through October, the city closes four blocks of downtown to regular traffic to make way for hot rods, classic cars, and more.  “It’s a social gathering,” says Tim Ross, director of public events for the city. “Like a tailgate party without the football game.” Restaurants in the area often fill up during Downtown Cruise-Ins as visitors of all ages take in cars of all ages. Ross reports his own young children will point to, say, a 1951 Hudson Hornet and declare, “‘Hey, there’s Doc from Cars.'”

Finding ways to bring old cars to life is the daily work of Patty Hornback and her husband, Jim, at the Shoebox Shop in Hodgenville who recently restored a 1935 Chevy Master, complete with satellite radio and other creature comforts. Patty, a member of Nolin  Rural Electric Cooperative, says their love for automobiles started as a hobby and just evolved into a classic car restoration shop.

Customers are usually interested in restoring the type of car they had when they were young. The Hornbacks have established an extensive parts database that enables them to locate restoration parts the average car enthusiast cannot find. “It’s taking something that may be just a bucket of rust and making a nice, classic car to drive and enjoy,” Patty says. “The transformation is unbelievable.”

At 92, Bill Swope knows something about transformation; he’s seen the automotive world change literally beneath his wheels, going from dirt to gravel to hot-mix asphalt. Swope is chairman of Swope Family of Dealerships in Hardin County and has a passion for classic cars like those on display at Swope’s Cars of Yesteryear Museum in Elizabethtown. He remembers his family’s first car—a 1928 Buick—and reminds us that the automobile was newfangled technology once. “The car was at one time what the computer is today. Changed everything.”

When classic car devotees like Swope want to gather and cruise, they often trailer their prize to the designated
meeting point in order to spare it excess mileage. Swope says those cruises often take place “on a country road between two places to eat.” That means you could be driving along a scenic Kentucky roadway sometime this summer and find yourself surrounded by a herd of Hudsons, a siege of Studebakers, or a pack of Packards.

In June, Swope plans to chauffeur his 1925 Pierce Arrow to Paris, Kentucky, for a cruise sponsored by the Central Nickel Age Touring Club, which only invites cars manufactured before 1928. Swope’s take on why car people love cars? “You want to go someplace, that car is waiting to take you there. It’s a symbol of freedom.”

Cars can symbolize other sentiments as well, though; just ask Doug Baker. Over the years, his wife, Cynthia, had told him and other Mustang Mafia members about changes and upgrades she wanted to make to Sinister, her nickname for the yellow 1998 GT she liked to use for drag racing. After she was diagnosed with cancer, her fellow club members pulled together and gave Sinister a kind of extreme makeover. They lowered the car’s body, added new rims and LED underglow lights, gave it a fresh coat of duPont Porsche Speed Yellow, and hired a professional detailer to airbrush checkered flag designs similar to those of a car Cynthia had once admired.

At the unveiling of Sinister’s new look on Christmas Eve 2012, Cynthia gasped and shouted with joy. Then all the assembled members of the Mustang Mafia started to cry. “I have the best club members in the world,” she said.

That’s what car people do.

Summer is the season for Car Lovers all across the Commonwealth to race, cruise, or just get together and talk hot rods, horsepower, classic cars, and argue the merits of big block vs. small block engines. Here’s a sampling of just a few of the hundreds of Kentucky car clubs, events, and attractions designed to help you indulge your inner gearhead.

Have a car club, cruise, or other event happening this summer you think we should know about? Go to “Events”  to submit your information, which lists events across Kentucky up to a year in advance. (Note: To submit an event, you will need to “Join” our free KL Community, but once you register you will not need to do so again, and we will not share your e-mail. You can submit events, enter contests, collect recipes, etc.)

Kentucky Speedway
1 Speedway Drive, Sparta
(859) 578-2300
www.kentuckyspeedway.com
Kentucky’s premiere racetrack has events throughout the summer, and June 26-28 is one of the biggest occasions of the season with a host of races, including the NASCAR Sprint Cup Series Quaker State 400 presented by Advance Auto Parts. Other attractions include a Fan Zone, driver appearances, and interior and exterior campsites.

National Corvette Museum and Motorsports Park
350 Corvette Drive, Bowling Green
(270) 781-7973
www.corvettemuseum.org
www.motorsportspark.org
Located across the street from GM’s Bowling Green Assembly Plant, the Corvette Museum showcases Kentucky’s signature sports car. The museum’s new Motorsports Park is scheduled to open in August. Work continues as eight Corvettes were removed from a sinkhole that developed in February beneath the museum’s Skydome; however, museum tours are open as usual.

The Mustang Mafia of America, World Wide Inc.
Burnside
(606) 561-0635
www.themustangmafia.com
“Dedicated to the preservation and the love of the Mustang and the Spirit of Friendship.”

Shiftmasters Cruise-In
46 Back Street at the Farmers Market, Frenchburg
(859) 274-3148
Facebook: Shiftmasters of Frenchburg
Third Saturday of the month, April-October.

Somernites Cruise
Public Square, Downtown Somerset
(606) USA-CARS (872-2277)
www.somernitescruise.com
Fourth Saturday of the month, April-October. Winner of the Kentucky Living 2014 Best in Kentucky Car Show Cruise-In category, now in its 14th year, the free and family-oriented Somernites Cruise is one of the largest monthly car shows in the region. With a multitude of activities for every member of the family, along with big prizes, and new and exciting monthly events, it’s classic, nostalgic Americana at its best.

As we celebrate cars and the Kentuckians who love them in the June 2014 issue of the magazine, we looked at the numbers that illustrate the crucial role cars play in moving Kentucky’s economy forward.

1.15 billion The total dollar amount committed to plant expansions and other new investments in Kentucky’s auto industry in 2013.

82,000 Approximate number of Kentuckians employed in the automotive industry in 2014.

458 Number of motor vehicle-related facilities operating in Kentucky. Roughly a third of these are owned by or operated in partnership with Japanese firms. Examples include Akebono Brake in Elizabethtown and Glasgow, weatherstripping manufacturer Green Tokai Company of Maysville, and auto stabilizer bar producer MSSC of Hopkinsville.

450 Estimated horsepower of the 2014 Corvette Stingray. Manufactured in Kentucky, it can accelerate from 0 to 60 mph in under four seconds and was named North American Car of the Year at the North American International Auto Show.

80 Number of Kentucky counties with a working auto facility.

12 and 32 The number of consecutive years in which the Kentucky-produced Camry and F-Series pickup have respectively held those rankings.

For more information from the Kentucky Cabinet for Economic Development, download the following: