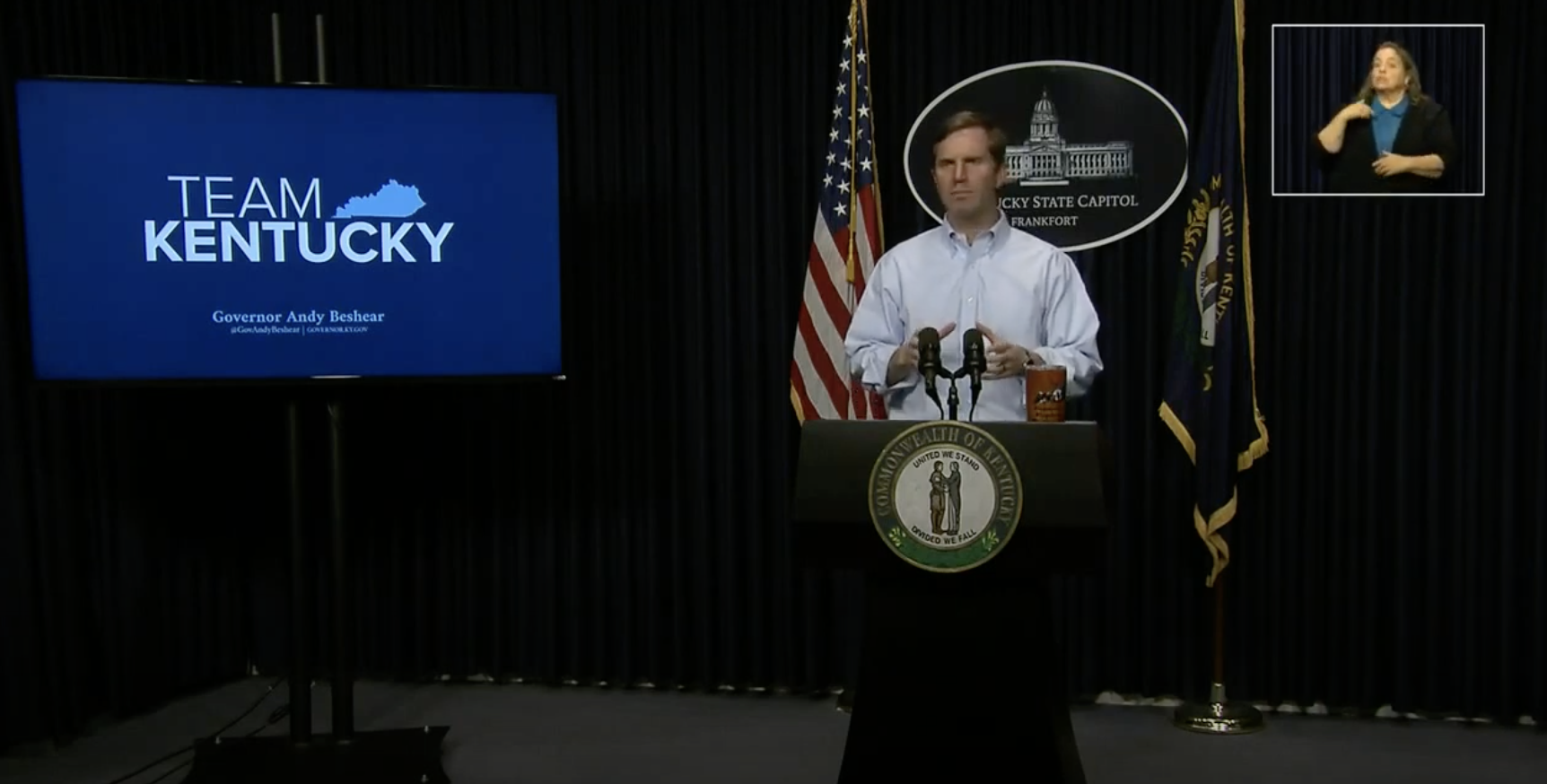 FRANKFORT, Ky. (April 15, 2020) –Gov. Beshear announced Wednesday that his administration is deepening ties with neighboring Indiana and Ohio in the fight against the novel coronavirus disease 2019 (COVID-19).

The Governor said he, Indiana Gov. Eric Holcomb and Ohio Gov. Mike DeWine have agreed to continue close discussions on responding to the coronavirus pandemic, with an eye toward eventually coordinating plans to reopen the states’ economies.

“Regionally, it is so critical,” Gov. Beshear said. “If you live in Northern Kentucky and Cincinnati is right across the river, we have to work together to make sure that one area isn’t on top of the virus and another just brings it in, and vice versa.”

The Governor will continue regular calls and planning sessions with neighboring governors and other leaders over the coming weeks. As action is taken, the governors will provide updates.

He said that the collaboration is essential but that each leader ultimately would make his own decisions.

“In the end each state will have to sign off on any of their plans. None of us are going to relinquish our obligation to serve our people,” the Governor said. “But we believe that these three states have been doing a good job in what we face with the coronavirus and that our experience is very similar and so that by doing this we believe we can have a more effective eventual opening of different parts of our economy.”

Comprehensive testing
Gov. Beshear also announced the first stage of a unique testing regime, starting with frontline health care workers, that is designed to save lives and get people back to work.

The Co-Immunity Project is a collaboration among the State of Kentucky, Louisville Metro Government, the Christina Lee Brown Envirome Institute and several major health care companies through the Louisville Healthcare CEO Council.

The project will focus on comprehensive testing, centered on antibodies and developing donor plasma resources.

“It will test for antibodies for those who have been infected in the past and may have developed immunity,” the Governor said.

Gov. Beshear said we are unleashing the capabilities of a special asset we have in our state, the Louisville Center for Predictive Medicine, which has state-of-the-art facilities for BSL-3 biocontainment research.

The Co-Immunity Project is a collaboration – not only between public and private institutions, but also among private health care companies that normally compete against each other. They are banding together, contributing different capabilities to this project with the same goal of delivering a testing regime that can save lives and get a community of people back to work.

“This is a unique opportunity for us to leverage all of the research capabilities of the University of Louisville,” said University of Louisville President Neeli Bendapudi. “We are very eager to try to work with the entire population, first of all to protect our health care workers and then everyone in the community and hopefully from Louisville we are able to take this and extend it to enhancing the health of the entire commonwealth.”

“I have some great news to share with the state about the Team Kentucky Fund,” Lt. Gov. Coleman said. “First of all, I have recruited five co-chairs to serve as the team that leads the charge here, and it is a bipartisan group of folks that you might recognize because they have all held my position of lieutenant governor in the past.”

Beshear, along with the Kentucky Public Protection Cabinet, took executive action March 23 to establish the Team Kentucky Fund, an online platform to provide help to Kentuckians affected financially during the COVID-19 emergency.

This fund will complement other efforts from the state’s unemployment payments to federal stimulus, said Lt. Gov. Coleman, who is also secretary of the Education and Workforce Development Cabinet.

Gov. Beshear said that right now there is more than $1.8 million raised or pledged to the Team Kentucky Fund.

“More than 7,000 people have donated. Most of the donations were less than $100,” the Governor said. “We’ve also had some businesses and private donors step up with gifts from $10,000 to the $1 million announcement we had from the Kentucky Colonels just yesterday.”

In addition to the Kentucky Colonels’ unprecedented donation, Gov. Beshear highlighted some of the major gifts, including $125,000 from an anonymous business donor, $100,000 from LG&E, $25,000 from Health Tech Solutions and $65,000 from Bret Walker and Emilee Stites in cooperation with TeeSpring Inc. (Walker and Stites operate BeshearGear.com, with 100% of proceeds going to the Team Kentucky Fund.)

“I want to thank everyone for their generosity in this,” the Governor said. “Nobody’s personal finances are in a positive place as we go through this. Thinking about the fact that people have donated already $1.9 million to help out their fellow human being is once again passing that test of humanity.”

“Any coach will tell you, in order to have success, you have to have to execute a game plan. Our game plan is this: stay healthy and stay home. And keep a safe distance from family and loved ones. That is how you win. That is how you defeat the coronavirus,” Coach Stoops said.

“But much like a team, you also need a strong supporting cast. That is why the Governor and the Team Kentucky Fund has put together an initiative and a fundraiser,” Coach Stoops said. “Some Kentuckians are being hit so much harder than others. And they need our support.”

Donate to the Team Kentucky Fund at www.donate.ky.gov.

A main point of emphasis is that Kroger stores and pharmacies are not testing sites. Please do not call the stores or pharmacies seeking to register for the tests.

Census update
Gov. Beshear is continuing to encourage Kentuckians to do their Constitutional duty and fill out the 2020 U.S. Census.

“The Census provides significant dollars,” the Governor said. “When we talk about needing to rebuild our economy, we are leaving dollars on the table unless every Kentucky family completes the Census.”

Newly released numbers show that Kentucky is outpacing the national average 51% to 49.1% in self-response to the Census. However, a regional look at the commonwealth shows far less reporting in the eastern portion of the state.

“This is really important for the months ahead when we can look to not just restarting but reviving our economy,” the Governor said.

“At this moment, it is operational. We currently have 250 beds there. We have the potential of expanding that should the need arise,” Gen. Lamberton said. “The intent of this acute-care facility is if there is a need and an overflow at our local hospitals in the Louisville area, that this is a means to send some of the light-medical-care COVID-19 afflicted patients. We can’t wait till that need is already there, we’ve got to have this prepared in advance of the need, thus the operational date now, well ahead.”

Case information
As of 5 p.m. April 15, Gov. Beshear said there were at least 2,291 coronavirus cases in Kentucky, 88 of which were newly confirmed.

“These seven people are a loss to all of us so let’s make sure we light our houses up tonight, and our places of business,” the Governor said.

At least 862 people have recovered from COVID-19 in Kentucky.