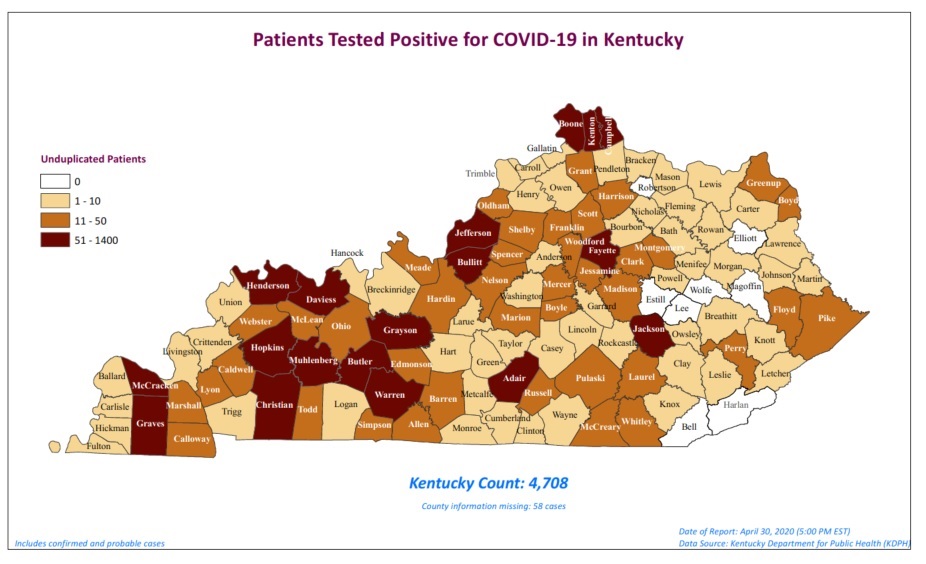 FRANKFORT, Ky. (April 30, 2020) – On Thursday, Gov. Andy Beshear reminded Kentuckians that we need to be the smartest, not the fastest, in reopening our economy in order to defeat the novel coronavirus 2019 (COVID-19) without causing a spike of cases in the commonwealth.

“You, the citizens of the commonwealth of Kentucky, are taking on a pandemic that happens once in every 100 years, and while we have lost too many, you are doing something this world has never seen and not just flattening, but plateauing the curve here in Kentucky,” said Gov. Beshear. “Your actions every day are saving lives. And as we go to make a slow, gradual transition from healthy at home to healthy at work, we need you now more than ever to be bought in and to be committed and to make sure that we do what it takes to protect one another.”

“We need everybody to use this resource,” Dr. Stack said. “We have to maximize N95 respirator supplies while we still try to acquire more of them to build up a resource should we need them at a later point.”

Unemployment insurance update
Josh Benton, deputy secretary of the Education and Workforce Development Cabinet, announced the state was able to clear an additional 1,050 of the 29,000 remaining initial March unemployment claims yesterday. There are 27,915 March claims remaining. This evening, 8,000 people who applied in March but have not provided identity documents will receive a direct email.

State budget
Today, the Office of the State Budget Director released the Quarterly Economic and Revenue Report, which includes an unofficial revised revenue estimate for the General and Road Funds.

“So all 50 U.S. governors are pushing, are lobbying, are pressing the federal government and Congress to include direct budget assistance to states and local governments that are facing the same thing,” Gov. Beshear said. “Remember, this type of assistance was done in the Great Recession, but what we are facing right now is a worldwide health pandemic that comes with another great recession. They did it then. They need to do it now.”

“At each location they are specifically flying over selected medical facilities throughout the entire state,” said Adjutant General Hal Lamberton. “This is a show of honor and respect for the military from everybody to the first responders, to the hospital workers, to those essential personnel who have been engaged in the pandemic response at this junction.”

SNAP
Kentucky is one of the pilot states for a new program allowing Supplemental Nutrition Assistance Program (SNAP) – or food benefits – recipients to use benefits online, including for delivery orders. Amazon and Walmart are currently the only retailers that have partnered with Kentucky for online SNAP purchasing.

Amazon will ship statewide. Walmart will deliver to select locations and also offers grocery pickup as an option to SNAP recipients and all other households. Shipping and delivery fees, when applicable, must be paid with another means of payment. They cannot be paid with SNAP benefits.

More information on who can become an online SNAP retailer and how to apply is available athttps://www.fns.usda.gov/snap/retailer. Kentuckians can apply for SNAP by calling 1-855-306-8959 or at www.benefind.ky.gov.

“This is good. This is going to provide an extra level of safety. It’s something we’ve been working on for a long time,” the Governor said. “We got over 600,000 individuals on SNAP who we want to make sure they can take advantage of this in their communities.”

Testing update
The Governor urged Kentuckians to fill up all available testing slots at multiple sites throughout the commonwealth. Anyone can now sign up for the free COVID-19 testing at many, but not all, of the sites. For the latest information on drive-through testing, visit kycovid19.ky.gov.

Yesterday, the Governor unveiled a tentative reopening schedule for a variety of businesses allowed to resume operations in May. However, he cautioned that in all cases, it will not be business as usual and will require adherence to the 10 rules to reopening, along with industry specific requirements. For more information, click here.

Condolences
Gov. Beshear offered condolences to the family of Jerry Maze, 77, of Owingsville, who passed away from COVID-19 on April 29.

“We appreciate Jerry and Jerry’s family and everything Jerry has done for this world and for his family giving us this opportunity to honor him today and to let the rest of Kentucky know that we lost somebody very special,” Gov. Beshear said.

Case information
As of 5 p.m. April 30, Gov. Beshear said there were at least 4,708 coronavirus cases in Kentucky, 174 of which were newly confirmed.

Unfortunately, Gov. Beshear also reported five new deaths Thursday, raising the state’s toll to 240 deaths related to the virus. Today’s totals for cases and deaths include one that is being listed as a “probable case.”

At least 1,675 Kentuckians have recovered from the virus.