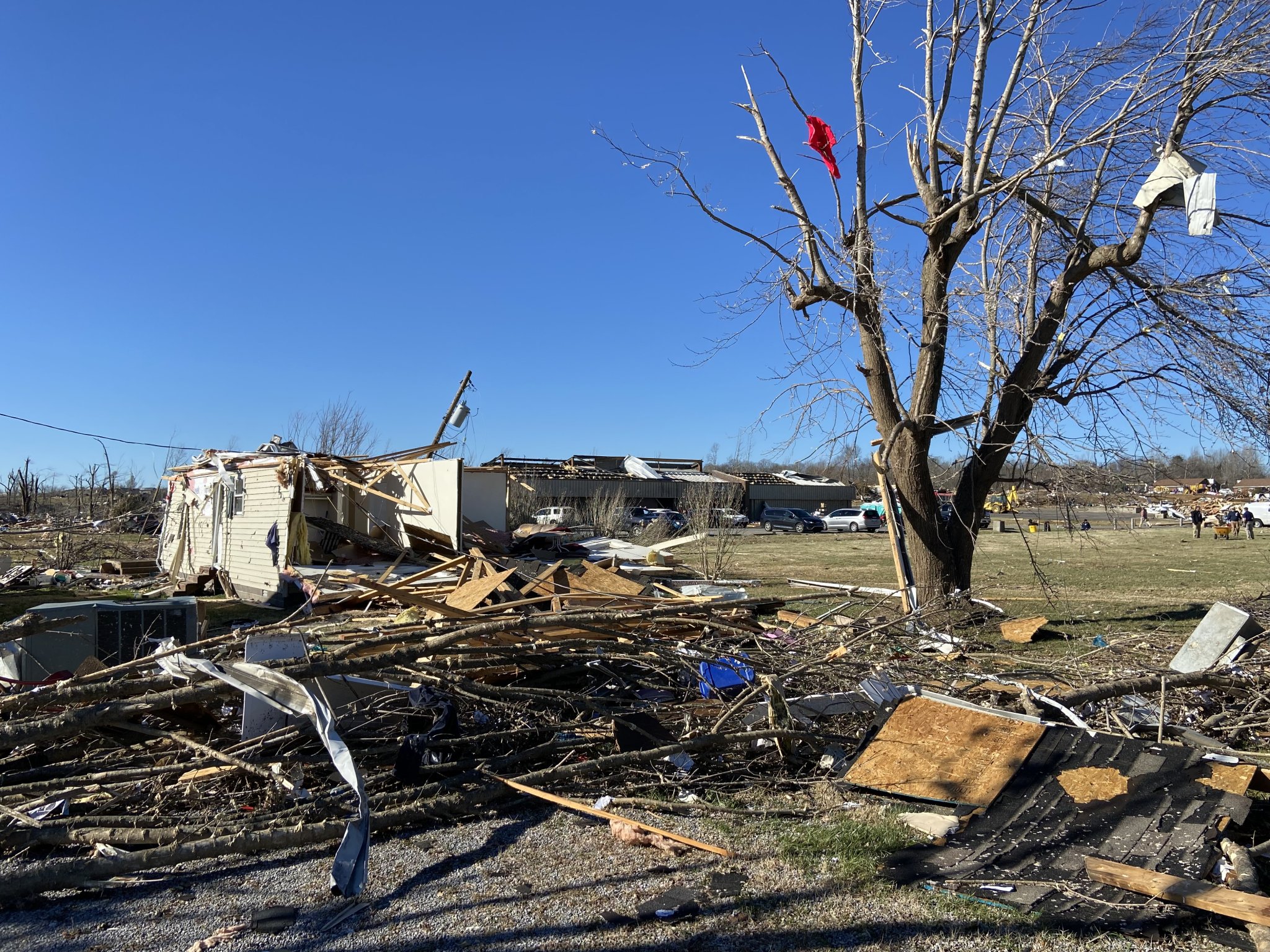 Surrounded by debris, destruction and an uncertain future for the western Kentucky communities they call home, electric cooperative employees and mutual aid crews are focusing on power restoration after an unprecedented series of massive and deadly tornadoes Friday night, December 10, in what is described as the worst disaster in Kentucky history.

At least 74 people are confirmed dead in Kentucky, with numbers still expected to rise. According to Governor Andy Beshear, the death toll includes 20 in Graves County, 13 in Hopkins County, 11 in Muhlenberg County; 12 in Warren County; four in Caldwell County; one each in Marshall, Taylor, Fulton and Lyon counties. Of the dead, 18 are still unidentified.

The ages of those lost range from 5 months to 86 years, including six victims younger than 18. In addition, 105 people remain unaccounted for; and hundreds injured.

Among the dead is Kentucky District Judge Brian Crick who served McLean and Muhlenberg counties. Calculating the human toll has been complicated by spotty phone and internet service, so some people who may have survived may not be able to reach loved ones or authorities, or may not know that they are unaccounted.

Gov. Andy Beshear says thousands of homes are destroyed, in addition to countless more that are unlivable or seriously damaged. Hundreds of businesses, churches and government buildings are total losses.

The largest of four Kentucky tornadoes first touched down in Arkansas, gaining strength along a cold front as it moved into Missouri, Tennessee and Kentucky, pulverizing downtown Mayfield, a city of about 10,000, and ultimately plowing a 220 mile-long path through Princeton, Dawson Springs and other rural communities and as far east as Breckenridge County.

Another tornado killed 12 people and caused extensive damage in the Bowling Green area, including the destruction of approximately 500 homes and 100 businesses. Especially hard hit is the US-31 bypass area and several neighborhoods. A 100,000-square-foot warehouse in the Kentucky Transpark was leveled.

From a high of more than 80,000 consumer-members who lost power when four tornadoes shredded everything in their paths, crews had restored service to all but about 16,000 members as of Monday morning. “It appears that work is really moving,” Beshear said.

Though western Kentucky bore the brunt of the disaster, co-ops all across the commonwealth worked to restore power from the December storms. The co-op mutual aid system saw crews helping fellow co-ops in every region.

In addition to an estimated 1,000 co-op distribution poles snapped in the tornadoes, the Tennessee Valley Authority reports approximately 100 TVA power structures (towers and poles) were damaged or destroyed, 29 TVA transmission lines were down and more than 20 customer connection points lost service, mainly in Kentucky.

In Ohio County, Big Rivers Electric worked with Kenergy Corp, to restore power in the southern portion of the co-op’s service territory.

“We are also focusing on maximizing available power sources to serve as many members as possible,” said Georgann Lookofsky of WKRECC. “That’s why we have asked Graves County residents who do have service to conserve power whenever possible. The conservation efforts are paying off–we’ve seen usage drop, which allows us to return service to more members.”

Substations serving the Mayfield area and northern Graves County were still without TVA power on Monday. Meanwhile, WKRECC’s operations center sustained damage and the co-op’s communications systems have been hampered, including the phone system and the website outage map.

In its service territory of the four westernmost counties in Kentucky and eight northwestern Tennessee counties, Gibson EMC reported 26 outage locations and about 4,000 member homes and businesses without power.

“The tornadoes left broken poles on every road they crossed from the Mississippi River to the eastern boundary of our service area,” said Barry Smith, Gibson EMC VP of Engineering and Operations. “The damage amounts to hundreds of broken poles.”

“Even with all of Gibson EMC’s lineworkers and lineworkers from Pickwick Electric, Milan Public Utilities, Jackson Energy Authority, Forked Deer Electric Cooperative, Chickasaw Electric Cooperative and Service Electric, repairing the monumental damage is a painfully slow process,” said Dan Rodamaker, President and CEO of Gibson EMC and Gibson Connect. “We know how very difficult a lengthy outage is for our members and we are pushing hard to restore electric and internet service as quickly as we safely can.”

At Pennyrile Rural Electric, crews have been working around the clock since the storms passed Friday night.  As of Monday afternoon, about 2,600 members were without power in Christian, Todd, Logan and Trigg counties. Several of the damaged TVA transmission structures in this area are being rebuilt.

Beshear urged Kentuckians who want to help to stay off the roads and leave room for first responders. Instead, he encouraged people to donate blood and cash donations to a fund “dedicated to helping the on-the-ground efforts going on right now and the relief efforts these families are going to need to rebuild.”

According to the governor, the fund will provide $5,000 to each victim’s family for funeral expenses. There is no need to apply the state will be working to contact families. As of Monday, December 13, the fund has received 30,175 donations totaling $4,009,817.71.

“We’re grateful for the outpouring of support, of attention, of prayers from this country and from the world,” Beshear said. “It’s all we can ask for and it’s just pure love. One country united, worried about us.”

“What I hope they see is that we also love one another,” Beshear continued. “We are good people that care about one another. We open our homes, we open our businesses. As people get power on, they are reaching out to everybody else to invite them in.”

Find more ways to help the victims of these tornadoes, by clicking here.