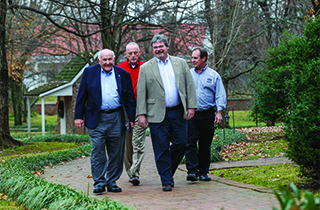 On November 7, 1996, 60- to 70-mile-per-hour winds fanned the flames of a Bardstown fire that destroyed Heaven Hill Distillery and seven of its warehouses. Master Distiller Chris Morris at Brown-Forman heard the news in London, England, and Bill Samuels, now Chairman Emeritus of Maker’s Mark, was in Budapest. They—and Kentucky’s other master distillers—rallied quickly to offer help.

“Everybody chipped in the next day,” says Heaven Hill’s Craig Beam, seventh-generation master distiller who shares the job with his legendary father, Parker, a 54-year industry veteran. “Our competitors—Brown-Forman (which produces Woodford Reserve) and Jim Beam—picked up some production for us.”

“We didn’t make whiskey for Craig,” adds Morris of Brown-Forman, “we actually made his whiskey.”

Other distilleries offered storage space and help in replacing lost inventory. In the end, Heaven Hill lost seven of its 49 warehouses, so no employees
missed a day of work, no product orders were delayed or missed, and the distillery was back in business in short order.

What became obvious in this crisis is that Kentucky’s 200-year-old bourbon industry takes care of its own. Competitive when marketing their particular brands of bourbon, its master distillers share a camaraderie born of a generational tradition of crafting bourbon, a heartfelt friendship with their peers, and a passion for their work.

“I could spend 12 hours a day in a distillery and love every minute of it,” says Four Roses Master Distiller Jim Rutledge, who’s been in the business 47 years. “It’s handling the yeast and fermentation, where the flavors are made. It’s doing that right. It’s an art. That’s what I love.”

“The grains, cooking temperatures, the distillation,” says Master Distiller Jimmy Russell, who’s been at Wild Turkey in Lawrenceburg for 60 years. “All that makes a good bourbon but we all do it a little differently.”

The distillers in this state that produces 95 percent of the world’s bourbon are all colorful characters who tell fascinating stories, some poignant, many hilarious.

Seventh-generation master distiller at Jim Beam in Clermont, Fred Noe is the great-grandson of the iconic Beam and son of the company’s late Master Distiller Emeritus Booker Noe, who in the late 1980s created the first small-batch bourbon.

“These days kids play video games,” says Noe. “I used to hang out at the distillery and ride in trucks and trains. I’ve been told that when I was a baby cutting teeth, my mother used to rub my gums with bourbon. Our family’s cough syrup was bourbon, honey, and lemon juice.”

Craig Beam, also a great-nephew of Jim Beam, and Russell share similar memories from their own childhoods.

“I got real smart when I was about 5 years old.” Russell laughs. “I’d cough all the time.”

In the past 10 to 15 years, worldwide interest in bourbon, its makers, and its distilleries has exploded. More barrels of bourbon are now aging in Kentucky than its population. This boom is thanks in part to the emergence of premium whiskeys—small-batch and single-barrel bourbons; bourbon’s versatility, i.e., the ease of drinking it straight or mixing it; a growing export market; the nationwide boom in microdistilleries; social media; and the industry’s ambassadors, the master distillers themselves.

As if overseeing the buying and milling of grain, yeasting, fermentation, distillation, and aging of bourbon didn’t keep them busy enough, these men travel the globe promoting Kentucky’s native spirit. They introduce bourbon to people who may not know about it. People want to know what bourbons and small batches they’re making. People want their autographs. They’ve become the rock stars of bourbon.

“People think we sit around and drink bourbon all day,” says Morris, whose mom and dad worked at Brown-Forman in Louisville, met, and married there. “They want to be us.”

Years ago, when Fred’s dad Booker stopped traveling for Jim Beam, Fred and Jimmy were on the road together promoting their bourbons. Fred noticed Jimmy writing on his hand and asked what he was doing.

“I told him I had a dad at home and didn’t need one on the road,” says Noe, “but he became my road-dad, especially after my dad passed away. Our industry is a close-knit bunch.”

Instrumental in developing Town Branch Bourbon in Lexington for Alltech Brewery and Distillery, Master Distiller Mark Coffman says, “I’ll go into pubs in Ireland, have a drink, sit, and talk to people. A lot think bourbon is just another whiskey but it’s not. It’s a Kentucky product and I want to get the word out. Many still think bourbon is an old man’s drink.”

“In my younger days it was a Southern gentleman’s drink,” says Russell. “Now ladies are really growing the business.”

Passing along their knowledge to the next generation of distillers is important to this brotherhood of craftsmen. For some, the motivation is family.

“Last year, my son Fred Booker Noe IV joined the Jim Beam team,” says Noe. “He learned the business by following his grandfather and me around the distillery and is in a two-year training program now. It’s up to him what facet of the industry he goes into.”

As generational history goes, the first bottle of Maker’s Mark in Loretto was dipped in its trademark red seal in 1958. When Bill Samuels took over the distillery from his father, T. William Samuels Sr., in 1975, his dad offered one piece of advice, “Don’t screw up the whiskey.” Bill has now handed the company reins to his son Rob, which the elder Samuels calls “the highlight of my 50 years in the trenches.”

“My son is new in the business,” Russell quips about his son Eddie, Wild Turkey’s associate master distiller. “He’s only been doing this for 33 years.”

“Our family has been making bourbon going on eight generations,” adds Noe. “Not a lot of industries have that, and it’s given our industry and our state a great heritage.”

Says Rutledge, “We love what we do and we love to share what we do. Teaching everything you know and generating passion in others, that’s just part of the job. We’re all building and maintaining and making our distilleries better, and we hope to pass that along down the road.”

“Bourbon is part of Kentucky’s history and culture,” says Morris. “It’s a rich part of our fabric we can’t let go away.”

Born in a barn fire
The roots of bourbon reach back to the 1700s, when early Kentucky settlers began converting corn and other grains to whiskey to make transportation to market easier and to use up excess stores of grain. Legend has it that in 1789, thanks to a barn fire, Baptist preacher Elijah Craig, “the father of bourbon,” discovered that charred oak barrels imparted aging whiskey with a richer color, smoky nose (or smell), and smooth taste.

Barrels of whiskey stamped “Bourbon County,” one of the state’s original counties, were shipped down the Ohio and Mississippi rivers to New Orleans. The long trip aged the spirit and the oak wood gave it a distinct mellow flavor and amber color. Whiskey from Bourbon County grew in popularity and became known as bourbon whiskey.

Since then, generations of Kentuckians have continued the time-honored tradition of making fine bourbon, unchanged from the process used by their ancestors centuries before.

Bourbon Making 101
By law, bourbon must contain natural grains with at least 51 percent corn; be distilled at less than 160 proof (or 80 percent) alcohol; age in new, charred oak barrels; enter the barrel at no more than 125 proof; age for at least two years to be termed “straight” bourbon whiskey; and have nothing added to alter the flavor or color except water from distilling through bottling.

To make bourbon, corn, malted barley, rye, and wheat are ground to an individual distiller’s recipe, and cooked in Kentucky limestone water to create a porridge-like mash that is transferred to fermenter vats. A portion of the previous day’s stillage (often called “setback”) is added to the mash cooker and the fermenter. The distillery’s yeast strain is added to the cooked mash in a large vat, where the yeast converts the sugars into alcohol.

Over several days, the fermenting mash bubbles violently, creating “distiller’s beer,” which drips down perforated copper plates, while steam blasts up from the bottom. Alcohol vapors rise to the top of the stills, are captured, condensed, and redistilled. The resulting concentrated “white dog” re-emerges at 68-70 percent alcohol, or 136-140 proof.

In a holding tank, the newly made whiskey is reduced to barreling proof (62.5 percent alcohol, or 125 proof) by adding limestone water. It is then transferred to a new, charred white oak barrel and sealed with a “bung.” The barrels are placed in open-rick warehouses, or rickhouses, to naturally age from 4 to 20-plus years.

During the aging process, the whiskey “becomes bourbon” and acquires its distinctive amber color, smooth character, and vanilla and caramel flavors.
For more information, go to the Kentucky Distillers’ Association at www.ky
bourbon.com.

Check out this video for a sneak peek from this rare gathering of five Kentucky master distillers and the Chairman Emeritus of Maker’s Mark, Bill Samuels, recorded on December 5, 2013, at My Old Kentucky Home in Bardstown for Kentucky Living’s interview.

The Louie B. Nunn Center for Oral History at the University of Kentucky Libraries will include this video interview as part of their new Kentucky Bourbon Tales Oral History Project, which records distillers’ stories as a way of preserving Kentucky’s bourbon-making history. A behind-the-scenes video montage from all project interviews will also be debuted at the Kentucky Bourbon Affair, www.kentuckybourbonaffair.com, May 14-18, in Bardstown.

With interest in the bourbon industry at an all-time high, the Kentucky Distillers’ Association and the University of Kentucky’s Louie B. Nunn Center for Oral History formed a partnership in September of 2013 to collect and preserve the stories of the Commonwealth’s treasured master distillers and the iconic distilleries they represent.

The project—Kentucky Bourbon Tales—records the personal story of each distiller and of the iconic figures behind the brands, the histories of the distilleries, changes in the bourbon industry, background on the distilling process, and the intriguing, often riotous, yarns spun by the industry’s “rock stars,” as the master distillers have come to be known.

“Sadly, many of the keepers of this history—and storytellers whose voices can never be re-created—are slipping away,” says KDA President Eric Gregory. “That’s why Kentucky Bourbon Tales is one of the most important projects of our lifetime.”

Recordings began with interviews of father/son Master Distillers Parker and Craig Beam of Heaven Hill Distilleries and stories on the Brown-Forman Corporation, Diageo North America (makers of Bulleit Bourbon), Four Roses Distillery, Jim Beam, Maker’s Mark, and Wild Turkey Distillery. In addition to documenting the history of bourbon, distillers and industry veterans also will weigh in on Kentucky as the birthplace of bourbon, what makes Kentucky bourbon the best in the country, and the tourism and economic importance of the Kentucky Bourbon Trail tour.

As the Nunn Center progresses in processing the interviews, the public will be able to easily search the collection using OHMS, the Oral History Metadata Synchronizer, which connects searches to text in transcripts and correlating moments in audio or video interviews.

Watch the interviews and learn more about bourbon