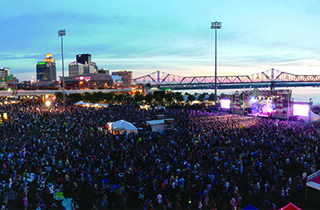 Just as Kentucky is a state that has produced more than its share of great music, it’s a state animated from May through October by a host of festivals that enliven communities and create exceptional musical atmospheres.

Some of them have grown from small beginnings to become major endeavors. According to founder and captain J.K. McKnight, the crowd at Louisville’s Forecastle has grown literally a thousand-fold: from 60 or 75 people at the first event, a 2002 afternoon in a small Louisville park, to 60,000 over three days at Louisville’s Waterfront last July.

Forecastle grew steadily over its first few years, moving from one of the city’s smallest parks to its largest. In 2006, the female alternative rock trio Sleater-Kinney headlined, six weeks after announcing that they would be breaking up after the tour. What would be the beloved group’s last show in the Midwest became a hot ticket (and it finally was a ticket: that year was the first time Forecastle charged admission).

In the years since, Forecastle has grown into a byword in rock circles. Rolling Stone called it one of the 33 coolest festivals in the country. Spin listed it among its 101 things to do in America.

While McKnight played indie rock himself, and has booked many bands of that ilk over the years, Forecastle has a refreshingly varied artist roster. McKnight says he once heard a local promoter refer to Forecastle as a “rock festival.” That comment made McKnight resolve (immediately, as he tells the story) that the next Forecastle would be headlined by a rap act, which turned out to be eccentric hip-hop pioneers De La Soul.

But McKnight thinks what distinguishes Forecastle isn’t just the music. The festival also incorporates art, with art installations and artists working live; and environmental activism, with speakers such as Robert Kennedy Jr. and through the year-round work of the Forecastle Foundation.

Jake Owen made himself a fan favorite in 2011 at Owensboro’s Big O Music Fest, a one-day country festival held at Reid’s Orchard.

Owen was three songs into his set when a rainstorm forced him offstage. But it didn’t stop him from performing: even though it was still raining, Owen took his acoustic guitar out into the crowd.

“Everybody came from under the tents and gathered around him and listened to him,” says Steve Terry, owner/promoter of the festival. “Most people probably couldn’t even hear him, they were so far away from him.

“It kind of endeared him to our fans.”

Terry says Owen was the artist that festival fans most often requested for a return visit. Which he did in 2013, headlining the show on the strength of a string of country hits such as Barefoot Blue Jean Night (one of the few songs he was able to get through in 2011), The One that Got Away, and Anywhere with You.

Special moments like Owen wading into a rain-drenched crowd are the sort of thing that draws music fans to festivals. They’re not just looking to purchase concerts in bulk; they’re looking for surprising experiences that put them in touch with the sounds they love—and introduce them to something new.

In Somerset, the magic moment of the 2013 Master Musicians Festival might have come before a note was even played.

For 20 years, the Master Musicians Festival has followed a broad, strong mission—in the words of festival president Tiffany Bourne, “to bring musical excellence to rural Kentucky where it’s not otherwise readily available. To bring music to our town, rather than our people having to drive to Louisville and Cincinnati.” (It’s a mission echoed by many other festival organizers: one practical thing festivals do is provide a temporary musical venue in places where there isn’t one.)

The festival takes place behind Somerset Community College, in a large field surrounded by trees. Each year a musician—often but not always the headliner—is recognized as that year’s Master Musician, someone who’s perfected his or her craft. The number has included Doc Watson, Richie Havens, Billy Joe Shaver, Dan Tyminski, and Guy Clark. For the 20th anniversary, they also recognized a local Master Musician, mandolin player Tommy Minton.

Other acts have included Steve Earle, Old Crow Medicine Show, and the Avett Brothers (who appeared on the day they signed their major label deal, Bourne was told). There have been reggae, blues, even classical artists.

To celebrate the 20th anniversary in 2013, the all-volunteer board that runs the festival decided to up its game and bring in a bigger-name act than had ever played Somerset: Willie Nelson and Family.

Nelson’s fee was three times what they’d ever paid a headliner, although the ticket price was a comparatively modest $45, $55 for the entire weekend. “It was pretty huge for us, and nerve-racking, but it turned out great,” Bourne says. The previous high attendance had been 4,000 over two days; last year, it was 6,000. And Bourne says, “We are going to try to keep it at that level” if they can find an artist with the same broad appeal as Nelson.

That matching of artist and audience is the key to successfully programming a festival. It’s not always a case of booking the biggest name you can get. “My challenge each year is to try to find the most current headliner I can, someone for whom the 15-30-year-old festival goers will come and hang out all day in 85-90 degree heat. They like the rockin’ young acts” such as Owen or 2009 headliner Jason Aldean.

That same issue, cutting the other way age-, culture-, and climate-wise, is why Rosine’s Jerusalem Ridge Festival keeps its date late in the year for a festival, at the beginning of October. “A lot of our people are over 70 and don’t like heat—it’s a danger thing, it’s a health consideration,” says Campbell Mercer, president of the Jerusalem Ridge Foundation, which puts on the festival.

Despite misfortunes such as a 2012 downpour that limited crowds, it’s grown into a very popular event. In 2011, 20,000 people attended over the festival’s six days, according to Mercer. Fans come from 50 states, a number of European countries, even Japan.

Jerusalem Ridge takes place on the very home spot of bluegrass music, the family farm of Bill Monroe, the place he celebrated in such songs as I’m on My Way Back to the Old Home and the great instrumental named Jerusalem Ridge. Until 2012, when a boundary dispute with a neighbor forced them to move the stage half a mile away, the festival took place on the slope behind the Monroe family home. The new stage is on land that had been farmed by Monroe’s fiddle-playing Uncle Pen Vandiver, and the festival runs shuttles so visitors can see the Monroe house.

The musical approach hews close to the model Monroe and others set in the 1930s, ’40s, and ’50s. The festival often features literal inheritors of bluegrass—the 2013 festival featured nephews of Grandpa Jones and Dave “Stringbean” Akeman, Bill Monroe’s early banjo player and comedic sidekick, and Ralph Stanley II, son of the Clinch Mountain great (who has himself appeared in years past). Many performers are former sidemen for Monroe or Stanley.

But the festival also features Mercer’s new discoveries of obscure folks who still play in the traditional vein. Clips from Jerusalem make up a large part of the popular Cumberland Highlanders show on RFDTV (Mercer leads the group and MCs the program).

Noting that Owensboro’s ROMP calls itself a “bluegrass roots and branches festival,” Mercer calls Jerusalem Ridge “the roots and trunk.” “We resist the infusion of rock and modern country and newgrass into it,” he says. Playing Beatles or Paul Simon songs bluegrass-style isn’t what they’re about.

This isn’t just nostalgia. To Mercer, the match between the music and the setting is what makes Jerusalem Ridge special: “It really seems like this music belongs in these hills and not any other kind of music.”

This is a selective listing of some of the state’s many music festivals. As of press time, most had not selected the artists they’ll feature in 2014 or settled on admission prices.

The Great AmericanBrass Band Festival
Danville, June 5-8
This unique celebration of brass bands takes in a wider variety of music than you might imagine, brings in renowned artists such as former Tonight Show bandleader Doc Severinsen, and attracts 40,000 people over its four-day run. Friday night is the Bayou and Brass street party, featuring a New Orleans sound and Crescent City food and drink. For this year’s 25th anniversary, the festival is featuring a retrospective of bands going back to the festival’s first year.

Sally Gap Bluegrass Festival
Williamsburg, June 5-7
This three-day event features the Lonesome River Band every year. The 2014 lineup includes Audie Blaylock and Redline, Southern Sun, High Tymes, Virgil Bowlin and Peerless Mountain, and The Dixie Ryders. In addition to the acts, it’s known for its free children’s program (the kids make a dulcimer banjo and play a song onstage) and its home-cooked food.

W.C. Handy Blues and Barbecue Festival
Henderson, June 7-14
This celebration of good food and good music draws national blues, zydeco, and rock ‘n’ roll acts such as the Holmes Brothers, Royal Southern Brotherhood, and Chubby Carrier and the Bayou Swamp Band. Most of the musical action takes place Wednesday through the final Saturday. Many local restaurants feature live music at “lunch breaks” through the week.

ROMP
Owensboro, June 26-28
Billing itself as “a bluegrass roots and branches festival,” this three-day event put on by the International Bluegrass Music Museum brings a blend of big names (Merle Haggard, Steve Martin), top acts in bluegrass (the Del McCoury Band, Sam Bush, David Grisman), and up-and-comers (Louisville’s 23 String Band). Don’t miss the late-night after-party shows on the back porch of a cabin in the park’s Pioneer Village.

Location: Somerset Community and Technical College
Admission: Ticket prices range from $20-$55. Under 12, free with adult.
(606) 677-6000 or go to
www.mastermusiciansfestival.org

Forecastle Festival
Louisville, July 18-20
See feature, page 33. The 2014 festival will begin on what would have been Louisville native Hunter S. Thompson’s 77th birthday.

Lost River Music Fest
Bowling Green, October 31-November 1
This festival features Southern rock, country, and classic rock bands from across the region, state, and beyond. The Kentucky Headhunters are the host band for 2014. Check the Web site for the remainder of 2014’s lineup.

Hoedown in the Holler
Flemingsburg, October 3-4
This five-year-old festival at Mandolin Farms brings in such national country acts as Lee Brice and Daryle Singletary and regional acts such as Sundy Best.