Nick Goldring’s love of music has provided a life of adventure.

“Sure, traveling would be great,” I always thought. “But I guess just not for me.”

I’m an average kid from Kentucky, born to a middle-class family. My parents worked. I went to school with the knowledge that I would go to college, get an education, and go to work. Yet I daydreamed of traveling by train around Europe with a backpack and no particular destination, no return date.

Traveling is expensive, however. Extravagant. Lots of planning and research, and probably for someone else. Someone with money. Someone from a more affluent upbringing. Something I just won’t get to do.

That last line was Kurt Vonnegut’s. It’s one of my favorites. He says it 106 times in Slaughterhouse Five. Those three words resonate with me like a mantra.

Three weeks to a month is a long time for a road trip. Especially when you’re in a different city every night. I did that dozens of times over the past ﬁve years and saw 40 states. When I was in college, I fell into my career by accident, allowing whatever happened around me to just happen, carefree and with little concern. I didn’t so much ponder my professional path, but rather stumbled onto it. I signed up for classes that sounded interesting like, “Voice Annunciation and Elocution,” “TV Production,” and “Media Law.”

As it turns out, those classes began my career and passion for video production and photojournalism. For 12 years now, I’ve been a television news photojournalist working in the Lexington and Louisville markets covering every kind of news event in the state and region. I’ve shot national championships, major court cases, politics, tragedies, and weather disasters. Many of those 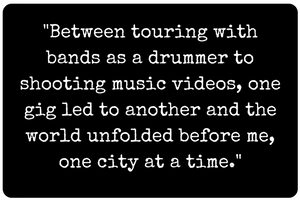 scenarios in any one given day.

The stress and time management I learned on the job could not be taught anywhere else. In the early days touring with the band, we spent a lot of nights sleeping in homes of strangers. Often times we’d be hosted by fellow “bandos” we played the show with, or a sympathetic bartender.

Other times it was truly random strangers, thanks to the website Couchsurﬁng. For those who imagine the glamorous rock star life of private jets and hotel penthouses, this was absolutely not that.

I didn’t get my passport until 2013. I was 29. My girlfriend, now wife, wanted to travel to Belize for her 30th birthday. So we went. My ﬁrst international foray.

We got engaged at the top of Xunantunich, a 1,000-year-old Mayan temple, and saw Mayan sacriﬁcial ruins a mile deep in a cave. I was hooked. I got the travel bug; and not the kind you get from drinking tap water in Mexico. I decided then that when regular, hard-working people want to go places, they just GO. If you get a little crafty and know a bit of hustle, you can make doors open. I suppose I was blessed with some natural rhythmic talent and somehow found it playing drums.

I don’t think it’s all that uncommon to possess the ability to play a musical instrument. What is uncommon is being able to ﬁnd the instrument that’s right for you, to practice and perform when sometimes you just want to give up, and to be able to ﬁnd a group of like-minded musicians that have the time, talent, and dedication to develop a performance that’s worth bringing to an audience night after night.

I started dedicating a good amount of leisure time to music and made opportunities to travel to most of the states. Between touring with bands as a drummer to shooting music videos, one gig led to another and the world unfolded before me, one city at a time. I wasn’t making much money, but the travel and adventure were worth their weight in gold. Some might say my gold was foil-wrapped chocolate coins. Well, I like chocolate.

The more networking I did, the more opportunities I found for video work that required traveling. A big perk of the job, as I saw it. I got a gig producing a music video for a band in California. I usually work alone and decided to make it a solo road trip. I hauled my camera gear and myself across the 2,500-mile ribbon of highway.

Along the way, I camped and explored national parks of grand and unimaginable beauty. Joshua Tree, Grand Canyon, Zion and arches, to name a few. We shot the music video at locations along the Paciﬁc Coast Highway and Sequoia National Park. So it goes. Around that same time, a friend was starting a business in Berlin, Germany, and needed some videos for promoting the company online. It’s an English language program for non-native speakers.

The job required I travel to Berlin and Munich in Germany, Warsaw and Krakow, Poland, and Prague in the Czech Republic. Yes, please! The linguistics jobs prompted my ﬁrst, and subsequently second, trip to Europe. After travel expenses, I ended up earning about as much as a monthly car payment; but the experience was worth so much more. On the road with the band “The way I see it,” aspiring to be a professional rock and roll drummer is a dream on the same level as a kid who wants to be an astronaut. Or a football player. Or president. But I had a bit of luck.

While playing drums in a Kentucky-based band, we were “discovered” on the internet by a Dutch booking agency. They invited us to tour the Netherlands and Germany to promote our album that would be released on a Dutch recording label. The travel and expenses were footed by the label. I found myself in Europe for the third time in three years. Never before could I have imagined  traveling overseas even once. I could probably count on a dozen hands and toes the dollars I made. If I could only retire on adventures… As a touring musician, I’ve experienced so many things I would have never imagined doing.

I’ve performed live on television in cities around the country and on the radio at places like WNYC in New York City and national radio in the Netherlands. I’ve played on a stage 15,000 feet in the mountains at a hang-gliding competition so high up that oxygen was provided for shortness of breath.

One of the most memorable moments, one that I’ll always remember, is playing a sold-out show at the Sugarfactory in Amsterdam. Four thousand miles away from home, playing to a crowd to whom we can’t speak their language but they knew the words to all the songs. Playing music has opened doors and made opportunities that most people don’t get, and I have so much appreciation for having those experiences. So it goes. Being a living and breathing human BEING is about the experiences while I’m here.

And sometimes it’s good. I can attribute so many of the good things in my life to simply letting them happen. As my life continues to play, I expect to ﬁnd that most things worth the time spent doing them will present themselves, whether I go looking for them or not. I must only be ready to let them in.

Check out some of Nick’s video work: