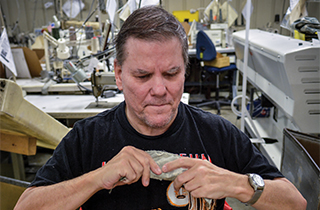 “I am particular about my work,” Don Hill says as he meticulously stretches a taut piece of fabric over a piece of plastic that will become the bill of a cap used by the United States military. Hill’s fingers glide across the piece, searching for any small crease or imperfection. Satisfied that it is perfectly flat, Hill then checks to see if there are any threads left dangling. If so, he holds the piece up to an electric hair clipper and quickly shears them off.

“This is not just a job that I get paid for,” Hill says. “What I’m making is for soldiers serving our country. That makes me particular and makes me proud.”

But Hill has never seen one of the thousands of caps he works so methodically to make. He has never seen the factory where he works, his work station, or even the American flag he had mounted at the top of his station. Hill has been blind since birth. About 80 percent of his colleagues at SEKRI also have a disability.

SEKRI is one of the largest AbilityOne defense contractors in the clothing and textile division, and contracts issued through them require that 75 percent of direct labor hours be performed by persons with disabilities. (Learn more online at www.abilityone.org.)

You have to talk with the individuals to discover that there is a significant difference at SEKRI. Unlike most businesses, SEKRI’s mission is not to make money but rather to provide jobs and training. Oscar Haulk established the company in 1971 specifically to serve people with mental or physical disabilities.

Don’t let that statement deceive you though. The company receives no dispensations for the quality or quantity of their work, according to Bradley. They have to meet the same standards as any other manufacturer, and compete for work just like any manufacturer. Today, SEKRI has 535 employees who fulfill 21 government contracts and four commercial contracts.

“Over the past few years, 90 percent of our work has been for the military,” Bradley says, “but with the reduction in military spending, the military does not need as many products and has drawn down on inventories. We’ve seen the value of our government contracts reduced by 70 percent over the past two years.”

For SEKRI that means the same thing as it does for other manufacturers—readjustments and a more fervent search for additional work. The readjustment is different within SEKRI, however.
“We are not about money,” says Bradley. “We are about keeping jobs. We have chosen to locate in rural southeastern Kentucky cities. There is not much work here to begin with and virtually no jobs for those with disabilities.”

The hiring process is different within SEKRI as well.

The first step is an initial consultation during which Cheryl Sanders, director of rehabilitation services, or one of her counterparts talks with the individual to determine if he or she has any disabilities, and if so what they are. Once hired, the individual is assigned an individual counselor.

“The counselors work with each employee,” Sanders says. “We begin by trying to stabilize their symptoms. At the same time, we are trying to determine what kind of work suits them best and modifying their work station so they can do the work.”

For Don Hill that meant creating an employee handbook in Braille. Hill also needed a way to find his station, so a thin rubber piece was installed from the front door to his station so Hill could feel his way with a cane. The station itself was located so it was a straight walk there and he did not need to weave through other stations. Finally, an electric razor was mounted at the side of his work station so Hill could trim threads from the material since he could not see to use scissors.

A walk through the plant reveals many more modifications. There are machines tilted at angles that make it easier for the operator, guides installed so an employee can use touch rather than sight to align materials, hand controls rather than foot pedals, extra lighting, work stations designed so that an employee who has diabetes can stand to do her work rather than sit, so that the exercise lowers her blood sugar levels.

The company also employs a teacher full time to help employees earn their high school equivalency or simply learn to read. Classes are held during work hours and are considered an investment in the person rather than a hardship on the company. Employees can also get help with basic life skills such as managing money and balancing a checkbook.

Perhaps most unusual is the approach the company takes to setbacks with the employees.

“There is a challenge most every day,” says Inez Hines, director of manufacturing. “Someone will have a meltdown or just can’t work. I came from the commercial side of manufacturing where this never happened. We get a counselor in there to help the person and figure out a way to still meet the customer’s need. It’s a big challenge but very rewarding.”

The result is a fierce loyalty between employers and employees seldom found in business today.

“These are the best people in the world to work for,” Don Hill says. “It’s more like family. We really care about each other. I’m proud to work here.”

Born with cerebral palsy and scoliosis and confined to a wheelchair, Jordan spent most of his time at home with his family. But he wanted a job, to be a productive member of society.
Jordan achieved that goal with a job at SEKRI. He started with the simple task of trimming threads, but longed to be a machine operator. After SEKRI managers figured out ways to adapt a work station to meet his mobility issues, Jordan got his promotion. Now he presses heat seals on U.S. Marine Corps hoods.

This spring, Jordan received the William M. Usdane Award, which recognizes employees with significant disabilities who exhibit outstanding achievement and exceptional character. Jordan was named both the South Region winner and the national winner.

“David’s personal drive, dedication, and work ethic have led to his success,” says Cheryl Sanders, who notes that Jordan rarely misses a day of work. “He proves the point that when provided with meaningful opportunities, motivated individuals can meet challenges…His infectious grin, positive attitude, and reliability are just a few of the attributes that set him apart. He leads by example every day and enjoys his work.

Jack Engle, known as “Happy Jack” to many of his co-workers because of his cheerful attitude, quilts patrol cap visor boards for the Army. Corbin Plant Manager Delena Mills says Engle has a great work ethic. Jack and his wife, Cherie, who also works at SEKRI, are raising four children.

Mark Steelman lacked conventional interview skills when he first called SEKRI, desperate for a job. But during his interview, something about the young man made an impression on Corbin Plant Manager Delena Mills, and she decided to give him a chance.

“He was determined to prove himself,” says Mills. “And he’s one of our big success stories.”

While working at SEKRI, Steelman earned his GED credential, went on to pass the military exam, and is now in the Navy—his dream job.

Even after open-heart surgery, Carrie Frazier wanted to work, but few places would consider hiring an 82-year-old with a history of heart disease. SEKRI did, and Frazier says she loves her work. “Why don’t you retire?” she is often asked. “I don’t want to,” she responds. “I can’t wait to get here each day.”

Need a company to manufacture your items? SEKRI is looking for companies to serve. Contact Norm Bradley or Stan Baker at (606) 528-7490. For more about the company go to www.sekri.org.