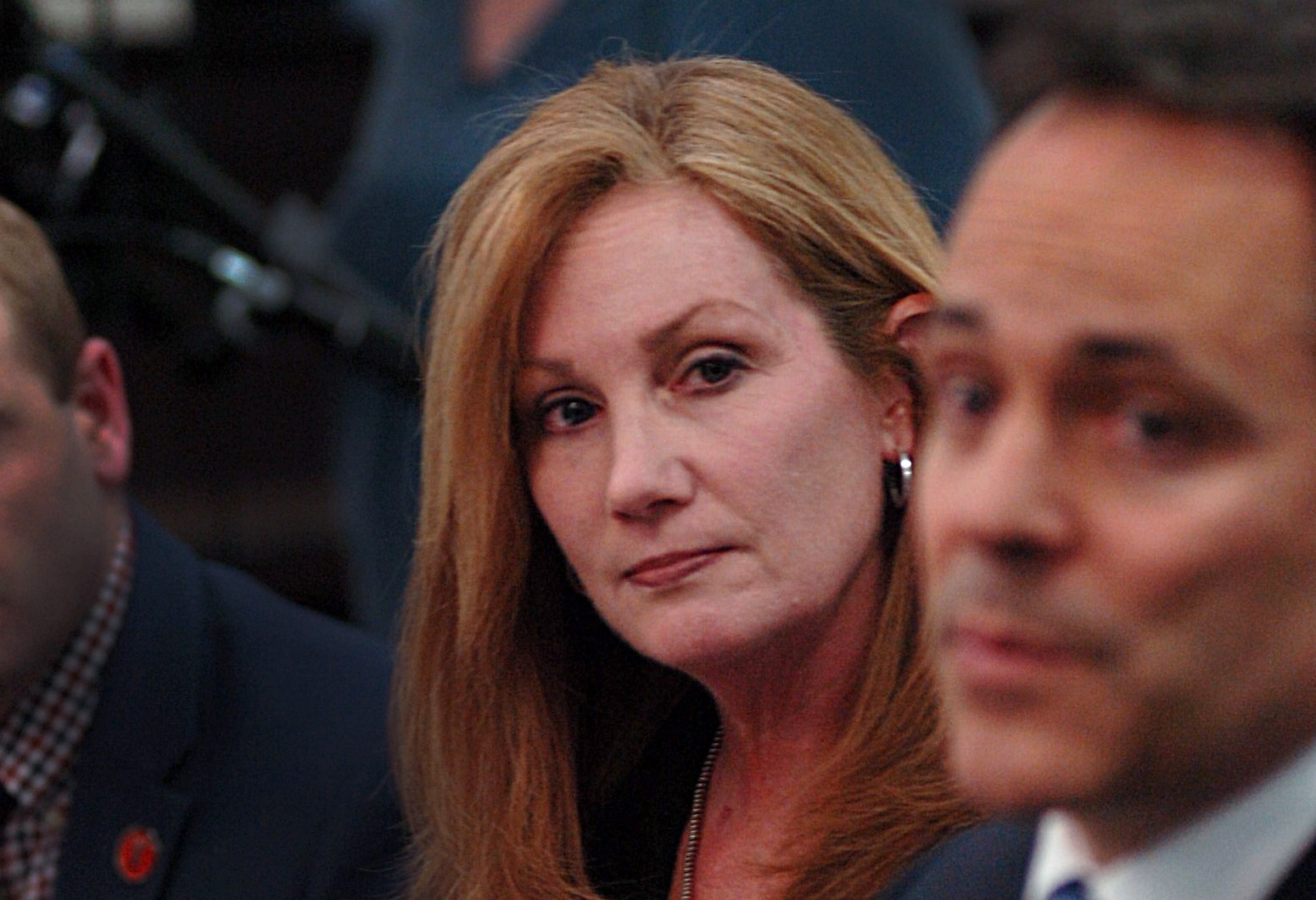 FRANKFORT, Feb. 15 -- Rep. Kimberly Moser, R-Taylor Mill, looks on as Governor Matt Bevin talks about stopping the opioid epidemic preceding her presentation of HB 305, a bill relating to the treatment of alcohol and other drug abuse in the House Judiciary Committee. Photo: LRC Public Information

FRANKFORT—A bill that would make it a felony to illegally sell or distribute any amount of fentanyl, carfentanil, and related drugs tied to an increase in drug overdoses in Kentucky has passed the House Judiciary Committee.

Trafficking in any amount of fentanyl, a pain killer now frequently imported for illegal street sales, and drugs derived from fentanyl as well as carfentanil—a large animal anesthetic said to be 10,000 times more potent than morphine—would carry up to 10 years in prison under House Bill 333, sponsored by Rep. Kim Moser, R-Taylor Mill. Trafficking over certain amounts of the drugs could carry even longer sentences.

The bill would also make fentanyl derivatives—which potentially number 800 or more, state officials say—part of the same class of drugs as heroin and LSD. Those drugs are classified as Schedule I by the federal DEA, which describes the drugs as having no “currently accepted medical use.”

“Whatever (fentanyl derivative) is thrown at us in the future will be a Schedule I controlled substance under Kentucky law,” if HB 333 passes, Office of Drug Control Policy Executive Director Van Ingram told the committee.

Fentanyl, carfentanil, and fentanyl derivatives are being mixed with heroin and sold on the street as heroin or other drugs. Some cities and counties have experienced dozens of overdoses in the span of a day or two because of the potency of the drugs, which, Ingram said, can be disguised as pharmaceuticals like Xanax or Percocet.

“The business model for drug cartels is to mix fentanyl with heroin and make it look like (something else),” said Ingram. “It’s a much better—for them. It’s a very deadly situation for our population.”

HB 333 would also create a felony offense called trafficking in a misrepresented controlled substance for those who pass off carfentanil, fentanyl, or fentanyl derivatives as an actual pharmaceutical, like Xanax.

Gov. Matt Bevin testified in support of the legislation.

“Until we have a frank conversation—as it relates to everything from the production, prescription, dissemination, and prosecution of opioids—we’re not going to fix the problem,” said Gov. Bevin. “With the exception of intentional drug dealers, most of the people who are complicit in this didn’t start out trying to be complicit in something that has been so crippling to our nation and to the commonwealth.”

Another provision in the bill would limit prescriptions for fentanyl to a three-day supply with few exceptions, said Moser. Rep. Angie Hatton, D-Pikeville, questioned how the legislation would prevent someone from getting another dose from another physician after receiving their three days’ worth. Moser said the KASPER system, which tracks prescriptions written in Kentucky for all scheduled drugs, is still in place to monitor what is prescribed.

“This language does not preclude the fact that physicians have to document with the PDMPs or prescription drug monitoring programs. KASPER is still a way to monitor… that’s still a requirement,” said Moser.

HB 333 now goes to the full House for consideration.