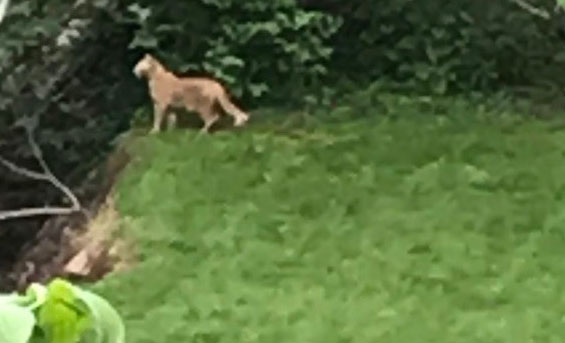 FRANKFORT (May 16, 2018) — Officials with the Kentucky Department of Fish and Wildlife Resources are asking people to be vigilant after receiving two credible but unconfirmed sightings of a mountain lion or other large feline in the Anchorage area of Jefferson County last week.

Two Louisville Metro animal control officers reported seeing what they thought might be a mountain lion or unusually large cat, and a homeowner snapped a photo of the animal. Kentucky Fish and Wildlife officials responded quickly to the reports.

Conservation officers and wildlife biologists found no tracks or other evidence at the site to support local reports. However, they considered those reports credible and interviewed area residents as well as the two officers making the initial report.

A homeowner standing on an elevated deck snapped a distant photo of the animal in question. While the image was blurred and the animal was not clearly identifiable, biologists were able to estimate measurements based on surrounding plant life. The image is included below.

Their analysis concluded that the animal pictured in the photo is significantly smaller than a mountain lion but larger than a typical housecat.

The Department of Fish and Wildlife is continuing to monitor the area and has set up trail cameras in an attempt to clearly identify the animal. Anyone spotting an animal fitting the description above should not approach it and should call Kentucky Fish and Wildlife at 1-800-858-1549.

In case of an emergency, please call 911.