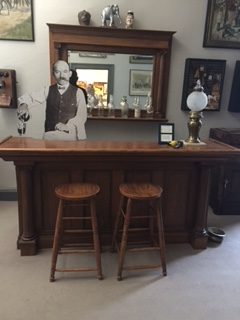 LOUISVILLE – The Frazier History Museum of Louisville is partnering with the Oscar Getz Museum of Whiskey History in Bardstown to launch Spirits of the Bluegrass: Prohibition and Kentucky.

On May 19, the Frazier exhibit will re-open at the Getz Museum in Bardstown, marking the first time that a Frazier original has hit the road as a traveling exhibition.

“Spirits of the Bluegrass: Prohibition and Kentucky was so popular with the public, we knew this exhibit had to live on beyond its time here at the Frazier,” said Frazier History Museum President Penny Peavler. “With Bardstown’s rich Bourbon past and growing Kentucky Bourbon Trail® tour experiences, the Oscar Getz Museum is the perfect partner with whom to share this important chapter in Kentucky history.”

Featuring two full bars and a lighted stage, the Frazier’s Prohibition and Kentucky exhibit, which ran from fall 2016 to winter 2018, explored the unintended consequences of Prohibition by tracing the rise of the temperance movement, bootleggers, speakeasies and flappers during the 1920s and ‘30s.

Looking for more fun? Check out our Events Calendar

A lineup of artifacts organized chronologically will tell the story of the temperance movement, followed by Prohibition in 1920 and its repeal in 1933. A new point of focus will be Prohibition’s impact on the city of Bardstown, where a black market for moonshine replaced the shuttered liquor distilleries. “A lot of people made a lot of money running whiskey,” said Dixie Hibbs, a local historian who has been helping with the project.

Prohibition and Kentucky will open to the public on Saturday, May 19, from 10 a.m. to 4 p.m., and remain open at the Getz Museum for a period of two or three years. A small private opening for invited guests will be held from 6 to 8:30 p.m. on Thursday, May 17, with performances by teaching artists from the Frazier held throughout the evening.

“We are very excited for the public to see our newly renovated museum,” said executive director Linda McCloskey. “We know it will be a big attraction for Bardstown tourists.”

The Oscar Getz Museum opened in 1984 when the Getz family, having sold the Tom Moore Distillery in Bardstown, saved its vast collection of artifacts, documents and whiskey industry memorabilia to put on public display. Among the 5,000 items in the permanent collection are vintage ads, moonshine stills, antique jugs, liquor decanters, medicinal prescriptions and more.

The museum is located in Spalding Hall, an antebellum brick building that served as a hospital during the Civil War. The staff has had to clear space around the entrance and renovate the hallways and foyer in preparation for the new exhibit, and a new effort to catalog, label and digitize the permanent collection is currently underway.

Admission to the museum is free of charge.