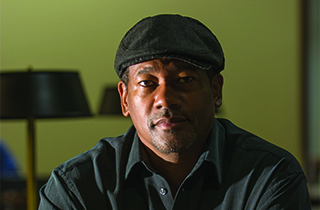 He is a poet who likes sporting a hat when giving a reading. Not just one signature hat. He is a man of many hats. Writer, poet, playwright, Frank X Walker comes across as an animated performer with a musical ear who doesn’t conform easily to just one label. When asked how he became a poet he responds, “I don’t think of myself as a poet. I think of myself as an artist activist who uses every means available to teach something, to effect change.”

In April 2013 at the Capitol Rotunda in Frankfort, he embodied that change. Having appointed Walker to a two-year term as Kentucky’s Poet Laureate earlier that year, Governor Steve Beshear wrote in a statement, “I look forward to celebrating the historic induction of Frank X Walker as Kentucky’s first African American—and youngest—Poet Laureate.”

At 51, Walker set the two records straight. He joined the formerly all-white literary legacy of 26 laureates in the state he helped define as “Affrilachia.” The term, which Walker invented, was later entered into the Oxford American Dictionary.

Artistically, Affrilachia became something of a leitmotif (a recurring theme typically associated throughout a music drama with a particular person, situation, or idea). It took flight as part of the name of a literary organization, the Affrilachian Poets (www.affrilachianpoets.org), which many associate with the birth of a movement, and turned up as the title of Walker’s first, largely autobiographical, poetry book. The second collection Black Box followed, and then Buffalo Dance: The Journey of York, his third of six collections of poetry.

Affrilachia kept Walker really busy as an activist and educator from the get-go. “A lot of people outside this region don’t believe that people of color live here. The term Affrilachia forces them to reconsider what Appalachia is,” Walker says. “The Africa in the word is so strong it challenges the preconceived notion that it is all white (individuals living) from northern Mississippi to southern New York: 13 states that include almost half of Kentucky, all of West Virginia, and 11 states around it. It’s important for me because it allowed me to claim the space by saying I am from Kentucky, my parents are from Kentucky, my grandparents are from Kentucky. We have history here, and there is a black community here and throughout the entire region.”

This community surfaces in Affrilachia’s opening and closing poems, Clifton I and Clifton II. “Clifton was the black agrarian community at the edge of town,” Walker, who grew up in Danville, explains. “After the Civil War when African Americans became free people they moved to the cities. And a lot of horse farms and larger farms suffered, and almost died. Many communities lured former slaves back to work in exchange for giving them land. As a result of these land gifts, free towns started popping up in Kentucky. Lexington was surrounded by a necklace of free towns like Clifton that included New Zion and Bracktown—both still active today.” Walker’s grandfather grew up in that community.

Poem Clifton II adds education to that story: Walker’s grandmother was an early graduate of the Kentucky Normal School (now Kentucky State University), which emerged alongside Berea College as a post-secondary education for African Americans in Kentucky. A teacher, educator, and avid reader, she passed those interests on.

Today, Frank X Walker, associate English professor at the University of Kentucky, lights up when he embarks on the topic of his true passion: teaching. “My work as a teacher is a part of me, the writer and artist. I don’t see it separate from what I do. I am a teacher who brings his art and activism to the classroom.”

Walker’s classroom is legendary, and very mobile. He keeps students on their toes by throwing sponge balls around the room to make them alert and engaged. Nothing is ever static, whether he is teaching literature, African American film, comics, and graphic novels at the academy. He also takes his teaching elsewhere, such as to the juvenile prison system, to men’s or women’s prisons, or to substance abuse centers.

Walker works from the premise that everybody is teachable. “My goal is to find how,” he says. “It is up to the teacher to identify the level of the student’s knowledge and understanding and to increase it.”

Executive Director of Carnegie Center of Literacy and Learning in Lexington Neil Chethik adds to that: “Readers love Walker’s powerful poetry, but at the Carnegie Center we are just as impressed with his teaching. He can engage an audience of any age, treat them with respect, challenge them, make them laugh, and leave them with something meaningful to ponder or act upon…he believes everyone is capable of telling a compelling story. He’s the kind of teacher—the kind of person—who opens you up and invites you to shine.”

To wear his many hats, Walker wakes at 4:30 in the morning, “When you are wide awake there are choices to make—what do you do with that time?” For Frank X Walker the choices are simple. “I try to write, or read, or edit every single day. When I am up at 4:30 a.m. I am at work, but at a job I love.”

Frank X Walker the poet became synonymous with persona poems written in a voice of characters he inhabited. The voices, he thinks, chose him more than he chose them. Artist activist Walker is channeling the thoughts of the muted and the silenced. With six acclaimed books of poetry, including the recent Turn Me Loose: The Unghosting of Medgar Evers, two anthologies, 10 issues of his journal Pluck!, and six plays that have been produced, Frank X Walker is still far from being done. Learn more at www.frankxwalker.com.

When asked about his most important book, Walker says, “Always the one that I haven’t written yet. I am on this planet to write and art.”

Clifton II
By Frank X Walker from his collection Affrilachia

If I thought
it made a difference
I’d round up everybody I know
bring them to this place
this Clifton
let them see
what used to be
ours.
If I thought it mattered
I’d bring my son and daughter
my nieces and nephews
to the old schoolhouse
and draw detailed maps
in the air
that highlighted
the thirty-three beautiful acres
bordered by the long slow curve
of the dix river.
If I thought they’d listen
I’d produce a powerpoint presentation
featuring all the faded yellow photographs
in aunt willie’s archives.
I’d point to clean white dresses
leather boots and knickers
and the serious look on grandaddy’s
ten-year-old face
and how much we all
favored each other
even then
even under a hat.
I’d pass around
a restored print
of their great great grandmother
margaret
who passed when mamma e
was just six months old
hoping they recognized
the high cheekbones
and regal disposition
that survived five generations
of mothers and daughters
and deaths
boldly suggesting that
their own beauty wasn’t accidental
that it was actually a precious family heirloom.
Projecting an IMAX-sized photo
of mamma e’s graduating class
on the wall
I’d draw attention
to the proud and focused faces
standing and kneeling
in two-feet-high weeds
wearing dark caps and gowns
like gold crowns and kente
clutching diplomas
like freedom passes
holding onto each other
with their eyes.
If I thought it was worth the effort
I would try not to be too anxious
or too teary eyed
while I hoped at least one of them
would memorize these things
and pass it on
until it mattered.

Frank X Walker is the 26th Kentucky Poet Laureate. While promoting the literary arts in the state, his agenda includes pushing for broader acceptance of who Kentucky writers are. He wants Kentuckians to diversify the list and acknowledge names like William Wells Brown: the first African American to write a novel in the United States, along with author of Harlem Renaissance Effie Waller Smith, playwright George Wolf, Gayl Jones, Crystal Wilkinson, Marvin Gaye, and bell hooks. “These are very established, well-known names I connect to Kentucky,” says Walker.

Source: Kentucky Department for Libraries and Archives and the Kentucky Arts Council.