Terry Wilcutt’s journey of exploration and discovery continues on Earth

Everyone can hear you laugh—in space.

NASA’s Terrence “Terry” Wilcutt is the only native Kentuckian to ever visit outer space. He says laughter among the crew was part of every trip he took beyond Earth’s atmosphere, part of a sonic sequence that became as regular and reliable as a countdown.

As each of his space shuttle flights ascended, the crew stayed silent, contending with the G forces that caused their body weight to double, then triple, before going weightless. Then, he says, “People start laughing because everything that isn’t tied down is trying to float.”

Next, they would go silent, then some would gasp as the Earth came into view, because, Wilcutt says, “It was more beautiful than any of us could imagine.” The pattern was always the same: “Silence, laughter, silence, gasps—and then the call from the flight commander to get back to work,” he says.

Today, Wilcutt is chief of the Office of Safety and Mission Assurance at the Johnson Space Center in Houston; his official NASA biography lists 14 awards, medals and honors. But talk to Terry Wilcutt, and he doesn’t sound like a man whose resumé reads like the backstory of an action-movie hero.

Instead, the easy laugh and soft-spoken manner of this former U.S. Marine, fighter pilot, test pilot and astronaut evoke two of the other defining moments of his 69 years: his time as a high school math teacher and as a country kid who loved the bookmobile.

Wilcutt spent his early years in Epley Station, an unincorporated community in Logan County. He recalls going to first grade in a one-room schoolhouse with a potbelly stove and no indoor plumbing. “That little school didn’t have a library, but the bookmobile came every Tuesday. That bookmobile was a godsend.”

He doesn’t remember which books he read as a child, just the accompanying feelings of wonder, adventure and possibility that came over him when he’d see shelves full of books inside the van. “When you read something,” he says, “it can take you someplace you’ve never been.”

The Wilcutts moved to Louisville when he was in elementary school so his father could take a job at General Electric. Terry and his four brothers grew up during the space race between the U.S. and the Soviet Union, in the days of Sputnik, projects Mercury and Apollo, and President John F. Kennedy’s 1961 declaration that America would put a man on the moon by the end of the decade.

“We watched all of that,” says Wilcutt’s older brother Dennis, now an attorney in Barren County, “but we never talked about becoming astronauts.” Terry, he says, “was just a regular kid,” one who liked baseball and Kentucky basketball and westerns on TV.

Terry majored in math at Western Kentucky University (WKU) and his initial career path was decidedly terrestrial: teaching high school math in Louisville. “I loved teaching,” he says. “It’s probably the most rewarding job I’ve had.” He says he loved helping students solve problems, overcome challenges and see the world from a different perspective.

Wilcutt left the classroom for the skies in 1976. His younger brother Kevin, already a Marine, told him about a special Marine Corps program that guaranteed qualified applicants entry to flight school. “The freedom of soaring through the skies,” Terry says. “I thought that must be the most exciting job in the world.”

As a Marine, Wilcutt flew the F-4 and F-18 Hornet, and graduated from the Naval Fighter Weapons School, the same one depicted in Top Gun. He earned promotion after promotion (eventually making colonel) serving as Fighter Weapons and Air Combat Maneuvering instructor and later test pilot for what his NASA bio describes as “a wide variety of … classified programs,” before joining NASA in 1990. There, the hunger for ideas and information stoked by that Logan County bookmobile found a feast. Besides learning about orbital mechanics and propulsion systems, Wilcutt attended lectures about the origins of life, the future of the universe and the possibilities of life on other planets, all while training to fly the space shuttle.

From 1994 to 2000, he flew two missions each on the space shuttles Endeavor and Atlantis, serving as pilot and later as commander. While logging more than 660 Earth orbits and 17 million miles, Wilcutt and his crews transported supplies and astronauts to and from both Mir, the Soviet/Russian space station, and the International Space Station, and helped conduct cancer and air pollution research, among other projects.

On those missions, their personal gear was limited—no books or videos—though Wilcutt did manage to bring a red WKU towel on at least one shuttle flight. For entertainment, he and his crewmates mostly looked out at the Earth. “We had to wipe the nose prints off the window every evening,” he says.

Jim Reilly served under Wilcutt on STS-89, Endeavor’s 1998 flight to the Mir space station. “Terry had a great, and really soft, management style,” says Reilly, who’s now the director of the U.S. Geological Survey. “He would ask three questions: ‘Do you have a plan? Is it working?’ And, ‘Are you ahead or behind?’” After Endeavor’s crew returned from Mir, “Terry called all of our parents and told them what a great job we did,” Reilly recalls. “That says a lot about Terry Wilcutt.”

In 2003, Wilcutt was scheduled for his fifth space mission when the space shuttle Columbia broke apart on re-entry, killing the seven-member crew. The accident and results of the ensuing investigation were a painful blow for the entire NASA community. “We found the program had gotten really complacent,” Wilcutt says. NASA leadership ordered a reorganization and asked Wilcutt to oversee safety and mission assurance initially for the shuttle program and later for all of NASA. 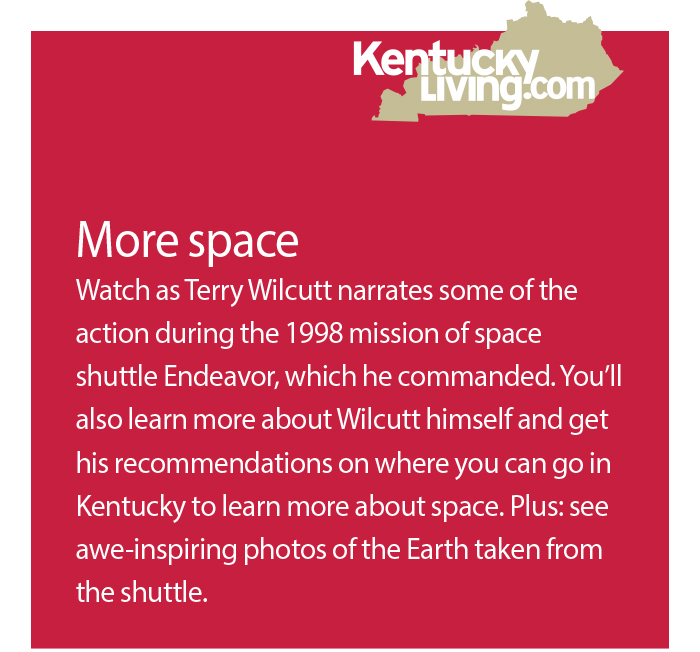 “You never get rid of all the risk,” he says. “But we don’t want to lose any more crew members.”

Dennis Wilcutt looks forward to the day Terry retires (he’s already eligible), and hopes to see his brother return to Kentucky, maybe resume the teaching career he left so many years and millions of miles ago.

That’s possible, though for now, he has no such plans. Terry has a son and granddaughter in Texas. Plus, he still loves his job, even sounds giddy when he talks about ongoing NASA projects, like the recently launched Parker Solar Probe. (“It’s fascinating, just fascinating!”) He’s excited about the future of space exploration, NASA’s work with commercial and international partners, and its plans to send astronauts back to the moon and eventually to Mars, “maybe in the late 2030s.”

For example: From 200 miles up, Wilcutt says, “You realize that Earth really is a spaceship and we—all people—are in this together and need to take care of it.”

Your perspective inevitably changes once you’ve floated up to the window alongside, say, a Russian crew member, and together watched lightning flashes that stretch hundreds of miles. Or the glowing outline of cities at night. Erupting volcanoes. The turquoise blue of seas and oceans, all as the sun rises and sets every 45 minutes.

He wishes everyone could see it.