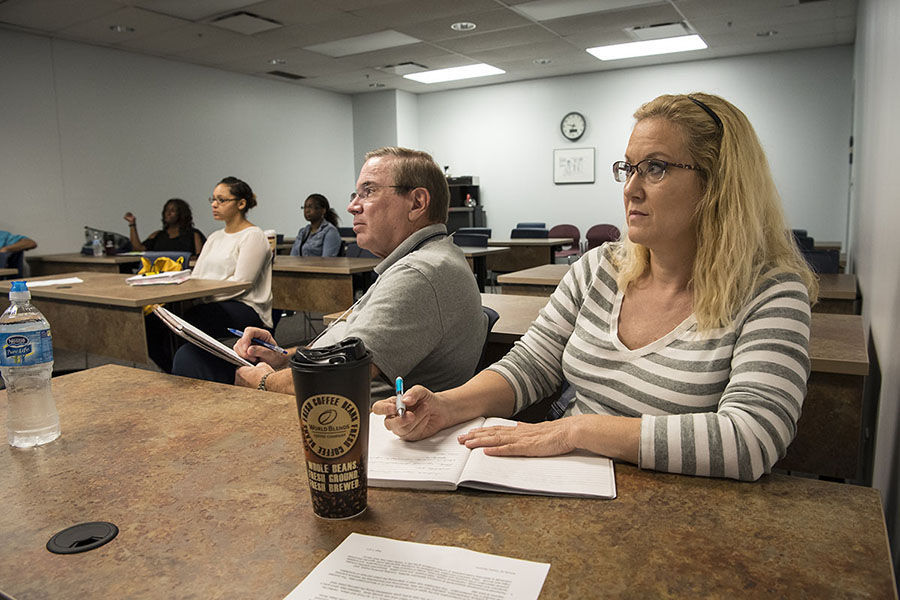 Environmental scientist Wendy Coates, Cincinnati, right, takes notes during a presentation at the Kentucky Career Center in Florence. Tom Heilman, Ft. Thomas, center, is a retired KCC career coach who continues to work with both veterans and non veterans. Photo by Tim Webb

[soliloquy id=”15255″]
Military training translates to marketable skills in civilian life
After a 25-year career in the U.S. Army working in military intelligence, including a 16-month deployment to Iraq and nine months in Afghanistan, Kurtis Stephens of Florence decided to make the transition to a civilian career.

Now, a year into his role as an administrator with the Department of Energy in Cincinnati, Stephens credits the Kentucky Career Center (KCC) staff in Florence, particularly Ken Wocher and Sam Travis, as well as volunteer federal recruiter Toni Lucarelli, with helping him navigate the civilian job application process.

“Ken and Sam were just absolutely on it. They went out of their way to help me out if I had any questions,” says Stephens, an Owen Electric Cooperative member. “They connected me with some resumé-building assistance. A huge part had to do with networking, since Ken was able to connect me with Toni, a federal recruiter he had met at one of their job fairs.”

Lucarelli, an Owen Electric member from Union and human resources specialist at the Department of Energy, volunteers her time to lead a free monthly workshop at the Florence KCC to assist veterans with resumé building and federal job searches. “I am the wife of a veteran. I have worked closely with veterans for a large majority of my federal career, both at the Defense Logistics Agency and the VA, and I feel a real connection with them,” Lucarelli says.

“We have put about nine or 10 veterans to work through that class in just one year. And that’s just the people that we’ve been able to keep up with,” says Travis, of Covington, who helped Lucarelli with the workshops while at the KCC. (Travis recently changed jobs and now works with Lucarelli as a human resources assistant for the Department of Energy.)

“The key is helping veterans understand and identify their transferable skills,” says Lucarelli. “That is the single biggest takeaway from our classes. You may have Army infantry guys who initially think, ‘I just shot a rifle.’ But when I talk with them and ask questions—‘Did you lead a platoon? Did you sign performance appraisals? Did you sign procurements?’—they begin to see” that they have all these communication and management skills embedded into their military training.

Work force-ready
Veterans make up roughly 8 percent of the Kentucky work force, according to David Kuhn, Kentucky’s program coordinator for veteran employment and training. Though the veteran unemployment rate continues to drop across the state—at press time it was just under 5 percent—Kuhn’s office currently has 13,000 Kentucky veterans registered as unemployed in its online job search database, Focuscareer.ky.gov.

Kuhn, himself a veteran, oversees the veteran assistance efforts of the 31 Kentucky Career Centers across the state, each of them equipped with dedicated staffers funded by the U.S. Department of Labor. These local veterans employment representatives, or LVERs, and disabled veterans outreach program specialists, or DVOPs, are trained to help provide veterans with personalized, priority service to help them secure a job.

“If a veteran is looking for employment or training services, by federal law they get service (at the career centers) before a nonveteran,” Kuhn explains. DVOPs assist veterans who have significant barriers to employment, including not only physical or mental disability but also homelessness, long-term unemployment, or lack of a high school degree or GED, for example. LVERs advocate with local businesses and industries, educating them about the advantages of hiring veterans.

“Veterans come into a job with the soft skills employers are looking for,” Kuhn says. “They show up on time. They are prepared to do a full day’s work for a full day’s pay. They understand how to stay drug-free and healthy. They’re conscious of their safety environment. They have leadership skills. They are dependable. They are adaptable. They do what they have to do to get the job done. That’s the way they are trained.”

Billy Miller, state director for the U.S. Department of Labor’s Veterans’ Employment and Training Service, whose office collaborates closely with Kuhn’s, agrees. “Our veterans are disciplined. They work well individually, but they also work well with teams. And today’s military veterans come out with advanced technical skills, whether in information technology, engineering, healthcare, or logistics.”

When employers hire former military personnel, they reap the benefits of their rich skill sets. Plus, in some instances, up to six months of the veterans’ pay can be covered by federal tax credits and on-the-job-training incentives for hiring vets. That means employers can acquire a fully trained employee at no initial cost to them. “It’s a win-win for businesses,” Kuhn says.

Transferable skills
During her six-year Air Force career, April Brooks of Madisonville was part of a weapons load crew in Idaho, helping load bombs, missiles, and gun ammunition onto F-15E Strike Eagle fighter jets. She was deployed to Kuwait for three months in 2002.

Now 10 years out from her military career, Brooks works as a paralegal for the law firm of James “Chip” Adams in Madisonville. She says the skills she learned in the military have transferred to her new career: “I think veterans have a unique skill set. Of course, my weapons job doesn’t have an equivalent in the civilian world. But the part that I do feel transfers is just the attention to detail and integrity—that sense that I need to do my job, and do it really well. The military teaches you that.”

Brooks was able to land her paralegal position thanks to the assistance of DVOP Charles Eaves at the Kentucky Career Center in Madisonville, who assisted her in rebuilding her resumé to showcase her professional experience.

Eaves, an Army combat veteran of three deployments to Iraq, including on the front lines in Fallujah, has worked for the KCC for nearly three years. “You have to be a special person to be willing to fight for your country. That’s why any time a veteran walks in, I make a point to talk with them and do whatever I can to help,” Eaves says.

“A lot of times, when veterans transition from the military to the civilian sector, it’s a big change. I know that, because I went through it myself,” says Eaves. “Veterans are so used to speaking the military jargon, with all the acronyms, that they often don’t know how to readjust their language so that civilians can understand exactly what they did. On resumés, it’s critical to make that adjustment from military terms to language that civilian employers can understand.”

Eaves was also instrumental in helping Robert Boyd, a Pennyrile Electric co-op member, find employment at the Hopkinsville Metalsa plant earlier this year. Boyd served 28 years total in the Army, the National Guard, and the Army Reserves, including time in Iraq, before being discharged in May 2015. “I really love it at Metalsa. It’s a great place to work. The management and the union are great to work with. They value their employees,” says Boyd, who is thriving in his career building truck frames.

“Veterans coming out of the military are highly trained. They’re highly competent. They’re eager, and they’re motivated,” says Jack Norton, director of communications for Hiring Our Heroes, an initiative of the U.S. Chamber of Commerce Foundation that has helped more than 500,000 veterans and their spouses secure jobs across the country. “Veterans have experience working in the military’s dynamic, fast-paced environment, so when they make the transition to a civilian work force, they’re able to jump in with both feet.”