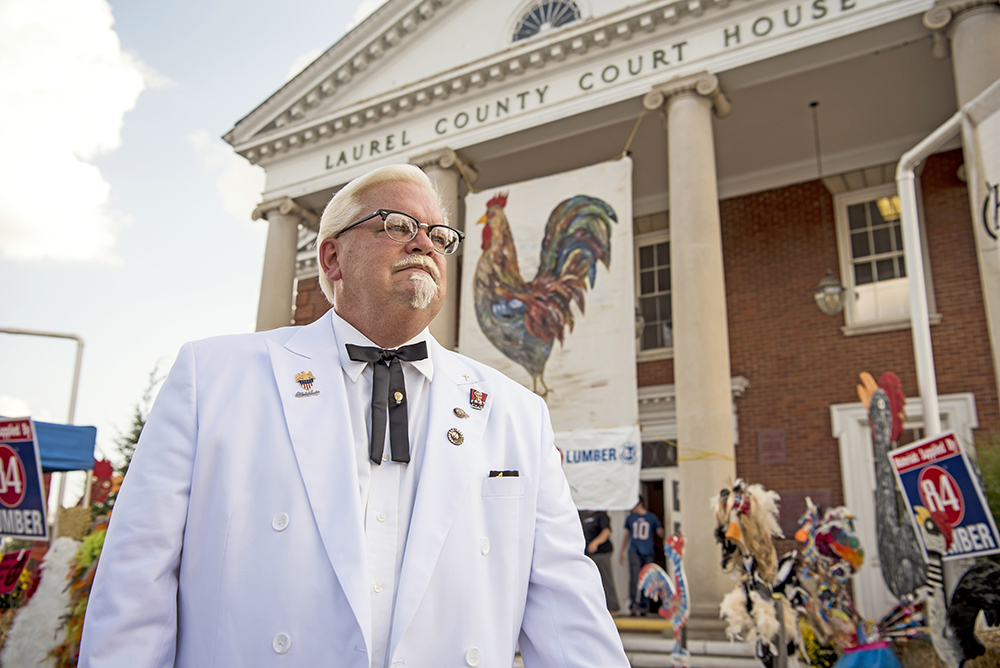 When it comes to its festivals, Kentucky has a more-the-merrier attitude. Here are some annual festivals happening across the state.

From the largest to the oldest to the grandest, Kentucky knows how to put the superlative in its festivals. Here are five such events where you can hear an outstanding variety and caliber of music, browse dozens of crafts booths or flea market stalls, nosh on a wide-ranging menu of foodstuffs (sheep entrails, anyone?), or simply join the crowds and get swept up in festival fun and frolic.

Named for the luxury albeit ill-fated Jacksonian Hotel, the Scottsville Woman’s Club Jacksonian Festival (Tri-County Electric’s area) was created 37 years ago in 1981 to celebrate food, fun, and history.

“What started as a small arts and crafts fair and a 5K run paying tribute to the old town hotel is a permanent part of the living history of Scottsville and Allen County,” says Rogerlynne Briddon of the Scottsville Woman’s Club and Jacksonian Festival Committee.

Now in its 37th year, the festival takes place annually on the fourth Saturday of April. Activities are planned during the week prior and culminate in a massive street fair, which features 20 to 30 musicians, a kiddie carnival, and a children’s train ride, among the entertainment.

“Additionally, the Allen County Historical Society presents a historical program,” says Briddon. “And our mayor presides over a recognition ceremony, sponsored by the Chamber of Commerce, naming a ‘Hometown Hero’ for contributions to our community.”

Storm the castle, soft shoe your way through a Highland dance demo, eat haggis—it’s all in a day’s fun at the Glasgow Highland Games & Scottish Festival. Held at Barren River Lake State Resort Park June 1-3 this year, (Farmers RECC’s area), this Kentucky Top 10 Festival brings it with a variety of entertainment and heart-pounding athletic events, including the battle axe competition and caber toss. For the record, a caber is a large tapered pole over 19 feet long that weighs about 175 pounds.

“For the second year, we are hosting the top 10 female Scottish athletes,” says Maureen Hendrick, who manages the festival. “Watching them toss the caber so masterfully is amazing.”

This year’s festival also welcomes internationally famous Tannahill Weaver, a band from Glasgow, Scotland, making a stop in Glasgow, Kentucky, as part of its 50th anniversary tour. Known for dynamic traditional Celtic music, the band includes piper Lorne MacDougall, who performed pipes for the Disney-Pixar movie Brave, DreamWorks’ How to Train Your Dragon 2,  and the BBC’s Doctor Who. The Tannies, as the band is known, were inducted into the Scottish Traditional Music Hall of Fame several years ago.

Also appearing will be Appalachian band Tuatha Dea. Events include the Raising of the Clans Torchlight Ceremony, the pageantry of the massed bands taking the field and a Kirkin’ of Tartan worship service.

When more than 60 bands descend upon a scenic 1,400 acres of Kentucky countryside near Morehead to entertain 20,000-plus fans over a five-day stretch, having a well-oiled volunteer machine is of paramount importance.

Such is the case each year for the Poppy Mountain Bluegrass Festival (Grayson RECC’s area) one of the world’s largest such festivals, where it takes a village of 50-plus volunteers, led by coordinator Tina Tackett, to organize the headliners on two stages—not to mention corral the 40 food and merchandise vendors that set up shop for the event.

“The music, the trails and the scenery keep visitors coming back year after year,” says Tackett.

And the music is stellar.

For the 26th annual festival, September 11-15, the lineup includes the Lonesome River Band, featuring Jesse Smathers. He is the winner of the 2017 International Bluegrass Music Association (IBMA) Momentum Vocalist of the Year Award, while Sammy Shelor is the five-time IBMA Banjo Player of the Year and winner of the Steve Martin Prize for Excellence in Banjo and Bluegrass.

Other bands include Russell Moore and IIIrd Tyme Out, a group that has amassed numerous IBMA awards, including Male Vocalist of the Year honors for Moore; Whiskey Bent Valley Boys; Hogslop String Band; and the Price Sisters, known for their unique style inspired by the Father of Bluegrass himself, Bill Monroe.

The ingredients for the success of the World Chicken Festival may not be as carefully a guarded secret as Colonel Sanders’ 11 herbs and spices, but it is every bit as impressive.

• 30 lbs each pepper and paprika

Created to honor that gent in the white suit who opened his very first KFC in Laurel County (Jackson Energy’s area), this finger lickin’ good festival is a fan fave that has been featured on the Food Network, the History Channel and KET, where the World’s Largest Skillet was used in a mathematics teaching video. It has

been chosen several times as one of the Southeast Tourism Society’s Top 20 Festivals and voted as one of our “Best in Kentucky” numerous times by readers of Kentucky Living.

Set for September 27-30 in 2018, the festival features more than 25 top-notch performers on two stages. Bonus: At the Harland Sanders Café and Museum, visitors can see memorabilia from the 1940s when it all began.

Founded the same year Kentucky became a state, Mt. Sterling held “court” on the third Monday of the month. Monthly events became a time to buy, sell and trade. The October Court Day became the busiest of the year because it was the month before the long, cold winter set in when people would stock up on essentials.

Today, the free-admission festival is held annually on the third Monday in October and the weekend prior. For 2018 the dates are Friday, October 12, through Monday, October 15.

Expect to see hundreds of vendors from all over the country, along with an enormous variety of items for buying, selling and trading. Food choices are seemingly unlimited. People, too—with as many as 200,000 attending during the festival’s run. Not bad for a town whose population typically hovers at the 7,000 mark. KL

Pioneer living, frontier skills, traditions, and lifeways – all this plus Ice Age artifacts are part of the annual Salt Festival at Big Bone Lick State Park in Union.

Casey County Apple Festival board of directors gathers round the world’s largest apple pie, which weighs over 3,000 lbs and served free to the public.

Pioneer Life Week at Carter Caves State Resort Park is a full week dedicated to the Revolutionary War, The War of 1812, and the settlement of lands around the Ohio River, with re-enactors, musical entertainment, and many historical programs to bring this rich heritage back to life.

Part of Georgetown’s annual Festival of the Horse, a 3-day event commemorating horse heritage in the midst of Kentucky Horse Country, the Georgetown Police Department’s Formation & Inspection is beloved by attendees.

Grayson Hometown Holidays knows how to put the festive into the holiday season.

The Kentucky Bourbon Festival is one of the Commonwealth’s leading community festivals, saluting and showcasing the bourbon-making process and the storied history of Kentucky’s renowned industry.

The Lake Cumberland Bluegrass Festival, held at the KOA Campground in Russell Springs, is simple, wholesome, and family friendly, but the music is hard driving traditional bluegrass that will make you want to get up and dance.

The Logan County Tobacco & Heritage Festival is a 2-week-long event ending on the 2nd Saturday in October that includes the Jesse James 5K, Craft and Flea Market, Free Concerts in the Square and the Parade.

The Master Musicians Festival brings a variety of multicultural, multigenerational, and multiracial music to its eclectic stage each year – everything from the blues to bluegrass, Celtic to Haitian roots, rock ‘n’ roll to jazz to progressive newgrass, country, and Americana, and everything in between.

Smoke from hickory-stoked fires blends with the aromas of sizzling chicken, bubbling burgoo, and roasting mutton . . . it must be the International Bar-B-Q Festival in Owensboro.

Chubby Carrier and the Bayou Swamp Band interacts with members of the audience on stage at the 2017 W.C. Handy Blues and Barbecue Festival. Traditionally, Chubby Carrier’s group performs on the night of the Red Bean and Rice Dinner fundraiser, adding zydeco flair to a lineup of blues music.