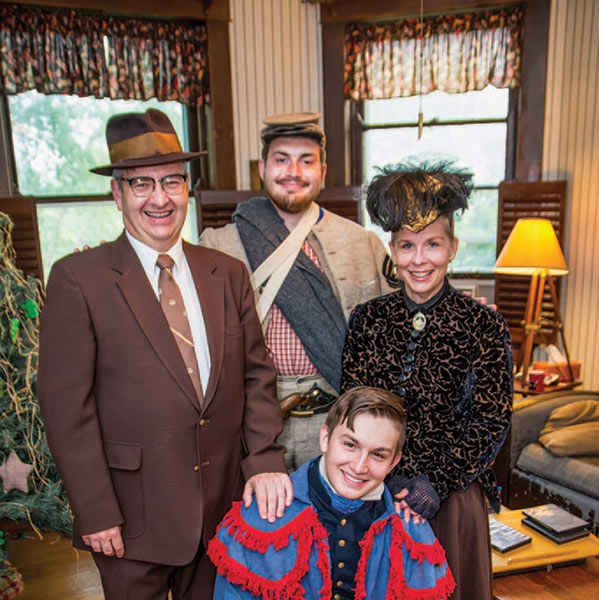 Through the Chautauqua program of the Kentucky Humanities Council, the Smith family, clockwise from left, Ed, Ethan, Betsy, and Harry, portray a total of seven characters. They are shown here as Adolph Rupp, Sgt. Major Johnny Green, Emilie Todd Helm, and Private William Greathouse, at their home in Cynthiana. Photo: Tim Webb

Coach Adolf Rupp “was really smart. He earned a master’s degree in education administration in New York City. He coached a team in Illinois in the 1920s that had an African-American player. And he was really funny, had a great wit,” says Dr. Ed Smith of Cynthiana, who performs a monologue of Rupp with Kentucky Chautauqua.

Funded by the Kentucky Humanities Council (KHC) and private partners, the Kentucky Chautauqua program provides support for solo dramatic performances that re-create the lives of Kentucky historical figures both famous and obscure.

“It’s a hybrid,” says KHC Executive Director (and former U.S. congressman) Ben Chandler III. In about 500 Kentucky Chautauqua performances every year, “We try to depict both the life and the importance of the life of that character.”

Chandler says the most popular Kentucky Chautauqua characters tend to be the most recognizable names such as Rupp, Abraham Lincoln, and Daniel Boone. Smith, who also teaches theater at Georgetown College, has done nearly 300 performances of Rupp, the University of Kentucky’s legendary basketball coach. He says part of the fun for him is “the excavation of little details that you’ll never get in history class, and then you figure out how to get those into the story.”

Smith places Rupp’s monologue near the conclusion of his coaching career, which ended with Rupp’s forced retirement in 1972. Smith, who also does Justice John Marshall Harlan for Kentucky Chautauqua, says he tries to be fair to his characters but not shy away from presenting them as complicated human beings. Smith’s relationship with Rupp has evolved over the 14 years he’s been presenting him.

“You start out, and the first year or more is just about getting comfortable in your character’s skin, being accurate and true to the script, those sorts of technical things,” he says. “But as the years go by, and I found out more about him…I find myself more interested in understanding the very recent history of Kentucky.”

Family affair
Smith’s need to transform himself for the performance has led to some memorable moments around the house. “My kids were young when I started and they would see me walking around the house saying, ‘Where’s my eyeliner?’ or ‘Where’s Daddy’s foundation?’”

Smith’s sons apparently weren’t troubled by their father’s avocation. In fact, two of the three are now doing Kentucky Chautauqua themselves. So does Smith’s wife, Betsy. Among the four of them, they’ve done about 600 performances.

Harry, 19, performs Private William Greathouse, who fought in the War of 1812 as a teenager. He says the variety of venues where Kentucky Chautauqua performers work “has made me more versatile. You perform for fifth-graders, in retirement homes, in tiny rooms, and in the Kentucky House of Representatives.”

Betsy Smith picked her first character, Emilie Todd Helm, because, as Lincoln’s sister-in-law, Helm had insight into how the Civil War divided families, even inside the White House. “I realized that this was a wonderful story to illustrate the tragedy of what happened in Kentucky and show some of Lincoln’s character, too,” she says.

Ethan Smith, 24, auditioned for Kentucky Chautauqua at age 13. He spent the summer between sixth and seventh grades researching Price Hollowell, who was 12 when he witnessed the brutality of the Black Patch War in Caldwell County in 1907. Improbably passing the rigorous audition process, he won entry into the program, and soon began doing performances in schools for kids not much younger than he was.

Ethan says children often ask the toughest questions. “They’re the ones who’ll pick at the heart of an emotional issue,” he says, “like ‘How could brothers fight each other in the Civil War?’” He and other performers also find that children, especially young ones, are sometimes vague about time and history, asking questions along the lines of, “Did you know Abraham Lincoln?”

Civil War’s Reverend Bush
The Reverend Newton Bush was once a Kentucky slave who ran away from his Franklin County farm to join the United States Colored Cavalry and fight in the Civil War. Bush’s story isn’t widely known, but it’s just the kind of story that Kentucky’s Chautauqua program is bringing to life throughout the state.

“That doesn’t bother me,” he says. “It’s a chance to educate Kentucky kids on a part of Kentucky and Civil War history they might never have heard of.” For example, Kentuckians accounted for about 24,000 of the African-American soldiers who, like Bush, fought on the side of the Union. Bell’s performance is set in a specific time and place—Thanksgiving 1924. The reverend is 78 years old at this point and looks back on his life for the duration of the roughly 45-minute monologue, which is followed by a question-and-answer session. In a sense, that makes the audience part of the show as well, which is part of the core mission of Kentucky Chautauqua, combining history and entertainment.

Alice Lloyd education pioneer
To be sure, Kentucky Chautauqua’s joining of present and past is not without the occasional awkward moment. Jacqueline Hamilton of Winchester portrays education pioneer Alice Lloyd, who founded the college that now bears her name and who died in 1962.

During one show at the Kentucky Governor’s Scholars Program, Hamilton earned a standing ovation for her rendition of Lloyd, including quotes like, “I have always told the people that they should ‘Have faith as firm as a rock and aspirations as high as the mountains.’” During the Q & A session afterward, Hamilton had to step out of character to answer a high school student’s question about how she’d met her real-life husband, who’d accompanied her to the venue.  When Jacqueline, in costume as Alice Lloyd, answered, “Match.com,” the audience laughed—and gave her a second standing ovation.

Moments like that aside, Hamilton says, “We can learn so much for our own journey through life by studying the lives of others.…And everyone loves a story.”

Shortstop PeeWee Reese
Performer Dick Usher of Benton found inspiration in the story of Harold “PeeWee” Reese, the Kentuckian who starred as shortstop for the Brooklyn Dodgers and who publicly befriended Jackie Robinson in the 1940s and ’50s. “PeeWee’s story seemed to reflect a priority I had developed in my career as a teacher and counselor—that it is so important to see others from their own point of view,” he says. Usher’s roughly 80 performances of Reese have included a rousing rendition of Take Me Out to the Ballgame, and sometimes, to Usher’s delight, “the crowd joins in.”

A successful Kentucky Chautauqua performance is a balance of preparation and spontaneity, of honoring the past and living in the moment. As Bell says of his approach to performing Reverend Bush, “I’m trying to pay back a debt to those men who suffered and died so we might be free from slavery. By telling their story, that’s how I repay my debt to them.”

To learn more about Kentucky’s Chautauqua program and see a complete listing of its characters, click here.

Kentucky’s Chautauqua performers work hard to bring historical figures to life for audiences all over the Commonwealth. Their monologues include actual quotes from the writings, recordings (in some cases), and interviews of well-known figures like Abraham Lincoln or Rosemary Clooney. Sometimes, the historical record is less complete and the performers craft the language based on research.

Here’s a sampling of quotes from the characters on the 2015 Kentucky Chautauqua roster:

PeeWee Reese, Hall of Famer, performed by Dick Usher of Benton
“It took no courage to do what I did; Jackie (Robinson) had the courage. What he had to go through—criticism, catcalls, loneliness, ugliness, isolation, death threats—all that and play outstanding baseball the way he did…I couldn’t have done it. I don’t know that any other ballplayer could have done it.”

Alice Lloyd, Stay on Stranger, performed by Jacqueline Hamilton of Winchester
“I have never taken a salary for my work. I limit the money we spend on buildings. We have no indoor plumbing or running water. Or a heating system. I figured God put coal in the mountains for the students to dig out and burn.” (c. 1930)

Harland “Colonel” Sanders, More than Fried Chicken, performed by L. Henry Dowell of Nicholasville
“The state of Kentucky, they put me up a marker down at the site of my original restaurant near Corbin, Kentucky, just a few years ago. And it said that I was, ‘Kentucky’s most famous citizen.’ That’s pretty good for a fried chicken salesman, don’t you think?”
Check out Dowell’s monologue “More than Fried Chicken” video.

Reverend Newton Bush, Freedom at a Terrible Price, performed by Robert Bell of Louisville
“I’m glad my wife ain’t here in the audience…On some Sundays, after I have had a chance to deliver a sermon, she starts giving me pointers about what I should or should not have said or did. I have to remind her over and over that it was the good Lord that called me to preach—and not her.”

Note: Anne Shelby begins the Kentucky Chautauqua program this year as a performer, and she is the mother of this feature writer Graham Shelby.

Simon Kenton, Frontiersman, performed by Mel Hankla of Hitchins
Kenton, an explorer and frontiersman, was a key figure in opening up and keeping the frontier safe for north and central Kentucky. He greeted early settlers as they arrived in what was then the far west, and risked his life to save many future Kentuckians, including his lifelong friend Daniel Boone.
Watch Hankla’s 45-minute monologue of frontiersman Simon Kenton.