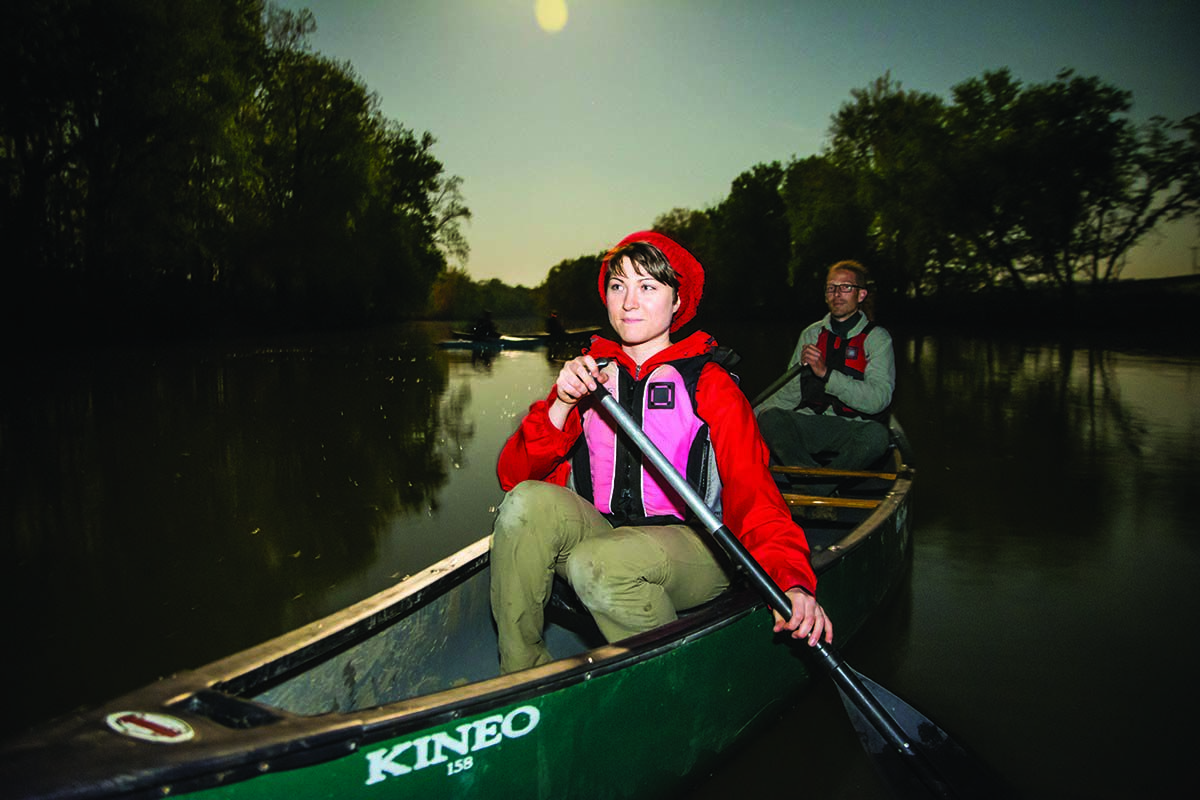 Alyssa Hosking of Bellevue joins Glen Thaxton in leading a small group on a moonlight float down the South Fork of the Licking River in Falmouth. Alyssa, a third-year Thaxton’s employee and a health and fitness student at Cincinnati State, says she loves that Thaxton’s is “so protective about the environment.” Photo: Tim Webb

Sometimes the lazy, hazy days of summer can be so hot and humid that the only comfy habitats are air-conditioned and underwater. But when the sun goes down in Kentucky, you can head back outdoors for a raft of fun options in the cool of the evening.

How about a quiet paddle under the stars, gliding in a canoe to the deep belly ribbit of frogs and the occasional hoot-hoot of an owl? In Butler in Pendleton County, Thaxton’s Canoe Trails outfits folks in canoes and kayaks on the Licking River during the day, and leads moonlight canoe floats on those quiet waters on several weekend nights around the full, warm-weather moon. The trips are every bit as peaceful as they sound.

“When it starts getting dark, the moon comes creeping out of the trees and guides us like a flashlight,” says Glen Thaxton, who runs the business his parents, Jim and Ann, began 37 years ago. “Fish in the ripples get spooked when we come by and start jumping. Sometimes they’ll even jump into a boat. The water’s shallow enough that you can actually smell the catfish.”

Up to 45 people can take to the night river at a time. The 6-mile route can take two to three magical hours for those who want to paddle and go home, or for lolling moon-gazers, up to four hours. “We don’t hurry in the moonlight,” Thaxton says. “We have a couple of staff boats to accommodate everyone. I let people stay out past midnight if they want.”

At the end of the adventure, a bonfire and gooey, chocolatey s’mores await. Should the river beckon you to stay, Thaxton’s rents six cozy waterside cedar cabins you can reserve or you can bring your own tent.

Theater, dinner, and camping
At Danville’s 350-seat Pioneer Playhouse, Kentucky’s oldest outdoor theater, all you have to bring is an appetite. Begun in 1950 by Col. Eben Henson, this state Historic Landmark entertains audiences all summer long. Such big names as John Travolta, Lee Majors, and Jim Varney got their start here. A resident troupe of actors who travel from as far away as New York and Los Angeles live in small cabins near the stage and present plays that change every two weeks.

“Every brick and beam of the playhouse tells a story,” says Heather Henson, managing director. “As the first recycler, Dad collected pieces of old Danville and built the theater complex from scratch.” The colonel often gleaned materials in unorthodox ways, once bartering a fifth of whiskey for 200-year-old, hand-hewn rafter beams.

Before showtime, guests can walk through an 1800s Antique Village that re-creates the town of Danville down to its original barber chair. The village has even appeared on American Pickers, a television show that follows antiques collectors. A welcome alternative in rainy or steamy weather, an indoor theater houses a display of photos from the making of the 1957 movie Raintree County, which starred Elizabeth Taylor and Montgomery Clift and was filmed in Danville. The movie’s train depot is now the playhouse’s box office, where you can pick up your tickets for dinner and a play. Reservations are required for supper and are a good idea for a performance.

Each summer, the theater presents an annual Kentucky Voices event that celebrates Kentucky writers and culture. This year, Grounded runs July 7 through 18. Adapted from the novel of the same name by Kentuckian Angela Correll, co-owner of The Bluebird Café in Stanford, the play by Chelsea Marcantel tells about a woman who moves to New York and, when her life crashes, returns to her small Kentucky town. It’s a feel-good tale about faith, family, and the farm-to-table food movement.

Another venerable outdoor theater has been staging productions in its outdoor amphitheater for 51 years at Jenny Wiley State Resort Park in Prestonsburg. Here you can eat supper at the lodge and catch a Jenny Wiley Theatre play—this year features Shrek the Musical and Little Shop of Horrors—in the nighttime mountain air.

Music among the vines
Fresh local produce from Shelbyville’s Gallrein Farms stars on the menu at Smith-Berry Winery in New Castle. On the second and fourth Saturday nights each month from May through October, some 500 people bring blankets, chairs, and tables to hunker down outdoors and groove to an eclectic array of musical presentations, such as ’70s and ’80s pop, rock, funk, and R&B by Old School Band (August 8); Jimmy Buffet tribute band Lunar Beach House (August 22); the Rigbys, a Beatles tribute band (September 12); and Olivia Henken (October 10) closes out its 2015 concert season.

A concert ticket also includes the luscious, made-from-scratch dinner, wine-tasting, and a concert. Also available for purchase is the secret-recipe sangria made by winery owner, winemaker, and chef Chuck Smith. To that, add the ambience of a Kentucky summer dusk.

“You can see the sunset from the concert lawn,” says Chrissy Banta, the winery’s events specialist. “All evening we keep the vineyard gate open. People will purchase a bottle of wine and walk out among the vines and sip and stroll with friends. Kids are romping with dogs. It’s a great family-friendly event.”

An amazing occurrence happens in only one place in the world when the moon is full, and that’s at Cumberland Falls State Resort Park in Corbin. When the night is clear, a natural moonbow appears over the falls within a few days of the full moon (check the park Web site for dates).

Not as vivid as its daytime rainbow cousin, the moonbow—sometimes called a lunar rainbow or a white rainbow—is a faint arc of light that looks white to the naked eye but shows multiple colors when photographed. It stretches from the base of the falls to huge river boulders nearby.

Until recently, Cumberland Falls shared the honor of being one of only two places in the world to see the moonbow, along with Victoria Falls on the border of Zambia and Zimbabwe. But according to Roy Johnson, the park’s general manager, an earthquake shifted the land near the falls in Africa, and now Kentucky alone claims that distinction.

Crowds of 800 to 1,000 often gather to witness the phenomenon, which is usually at its peak between midnight and 2 a.m. Known as the “Niagara of the South,” Cumberland Falls is one of the largest waterfalls east of the Mississippi River and the largest south of Niagara itself. It spans a width of 125 feet and tumbles seven stories to the river below.

Cumberland Falls by raft, zip line, and laser show
This year two new dimensions will be added to the already-spectacular event. First, the park plans to partner with Sheltowee Trace Adventure Resort (formerly Sheltowee Trace Outfitters), based in nearby Corbin, to offer nighttime, on-the-river moonbow viewing from below the falls.

“We’re ironing out details now,” says Dania Egedi, Sheltowee’s general manager, “but we’ll use one or more six-person rafts that are hand-powered—in other words, paddled. We’ve led daytime rafting trips into the falls and on the Cumberland River for years.”

Sheltowee is also offering “Full Moon Night Zips” on full-moon weekends on its 650-foot twin zip line, The Big Zipper, and its 185-foot Little Zipper, where kids as young as 5 can have some moonlight fun. (Zip lines also have daytime runs.)

The park’s second addition will create even more thrills. “Since we’re not allowed to set off fireworks, we decided to present a laser light show earlier in the evening as soon as it’s dark enough,” says Johnson. “On July 3 this year, a moonbow night, it’ll be the first time for any Kentucky state park to do that.”

On moonbow nights, park naturalists are on-site to tell folks all the fascinating details about what they’re witnessing; and the gift shop, snack shack, and visitors’ center all stay open late.

Because the event happens in the wee hours, the ideal moonbow weekend plan includes at least one overnight stay on the grounds. With solid hemlock beams, knotty pine paneling, and a massive stone fireplace, DuPont Lodge is considered one of the Kentucky State Park system’s most beautiful. Its balcony offers gorgeous views of the river, and its recently renovated restaurant features Kentucky Proud products. You know you’re in the Bluegrass State when you find a steaming plate of catfish and hushpuppies set before you.

With 48 lodge rooms, 25 one- and two-bedroom executive cottages, and 20 Woodland rooms (duplexes), the park has a total of 96 accommodations plus 50 campsites, and all offer free Wi-Fi. But for these popular full-moon nights, you’ll need to reserve very early–two to three months ahead for lowest rates.