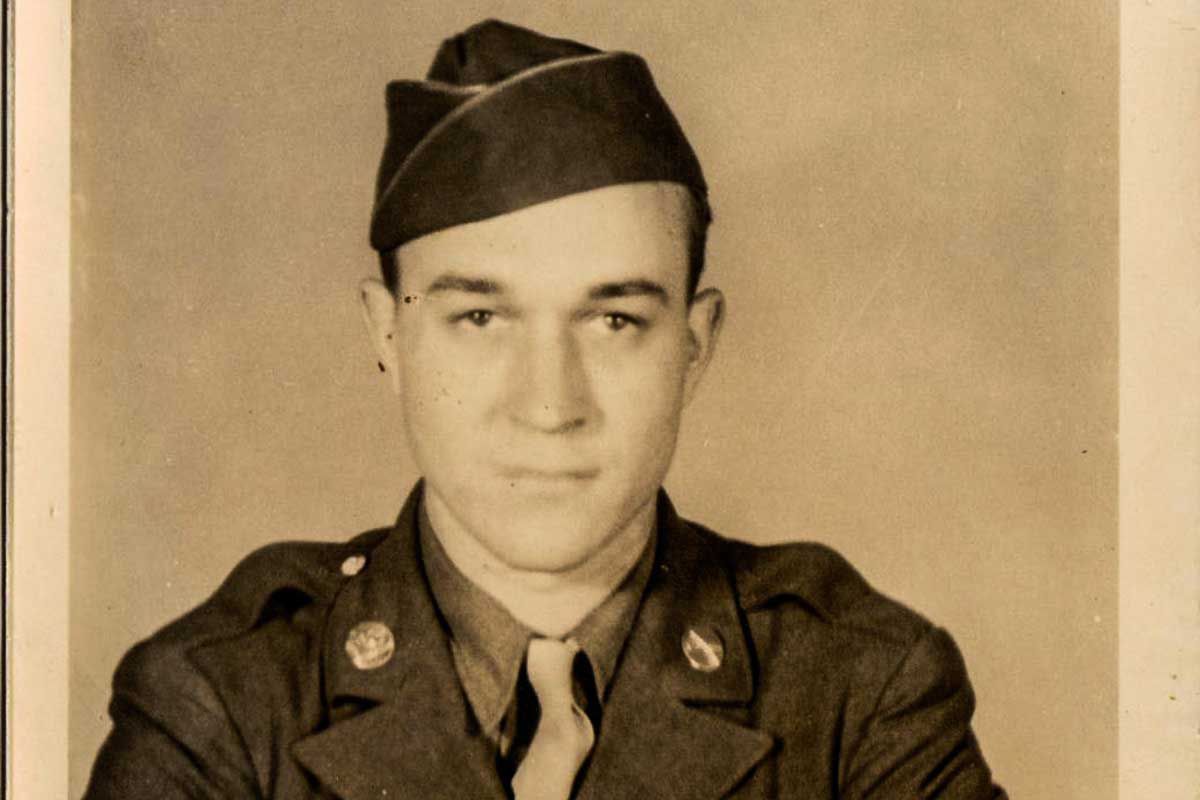 Coy Eugene Back, US Army

A family story of three brothers from Eubank, Kentucky, who served in WWII

My brother, Burl, who was four years older than I, had graduated college at Berea in May of 1941. After graduation he had gotten a job with Farm Security in Louisa, Kentucky. Pearl Harbor was bombed by Japan on December 7, 1941. In January of 1942 Burl volunteered to go in the Navy. He went up in rank pretty fast. Soon he was Lt. He was part of an LCI (Landing Craft Infantry). He was the acting captain of this ship.

My brother Earl and I were farming our family’s small farm and taking care of our elderly parents on December 7 of 1941, when Japan bombed Pearl Harbor. In August of 1942 Uncle Sam decided one was enough to do our farming and take care of our parents, so he sent greetings to Earl. He took Basic training in Texas. Then in early 1943 he went overseas. He was in Anti Aircraft. He was in the Invasion of Salina. He spent most of his time overseas in North Africa. He was one on a 40-mm gun crew. He was a telephone operator and would watch for enemy planes coming in and would notify the gun crew. He was good at it because his vision allowed him to spot them farther off than most people could. In 1945 when Germany surrendered, Earl left North Africa and came back to the States and was discharged to come home. He spent three years and five months in service.

In 1944 Uncle Sam decided he wanted me, so I received my greetings. I took my physical exam in Louisville, Kentucky. I passed with flying colors. I came back home on a 14-day leave. Our sister, Volina, and her husband had come to take care of the farm and our parents.

I reported back to Louisville and from there to Texas by train. We went by Kansas City and then to Texas. They didn’t tell us where we were going until we were almost to Texas, and then they told us we were going to Camp Fannin, Texas. Camp Fannin was near Tyler, Texas, where we stayed for 16 weeks of training. Three more from Eubank, Kentucky, were at Camp Fannin at the same time I was. I didn’t know them but it was some comfort to know there were more from my hometown. It didn’t take me long to get acquainted with them. They are all gone now.

This is where I met Clifford. We were very close to the same age, with him being one week older than me. He was born January 10, 1924, and I was born January 17 of the same year. Clifford and I soon became good friends. In November we completed our training and boarded a train to go home on a 21-day delay. In route everyone went to Kansas City and got off there to go to our perspective homes.

They put Clifford and me in Infantry. We were sent to Fort Ord, California, and from there we boarded a troop train and went to Seattle, Washington. I have forgotten the name of the camp. I didn’t stay there long. We then boarded an old ship, which they told us had been captured from Germany during World War I. We had not been on the water long until a storm came up. The old boat was flat-bottomed. The front of it would go way up and then back down and bounce for a while, then roll from side to side. We had a bunch of sick boys. Food had been spilled on the dining room floor, and it was slick as the ship rolled. We slid on the floor and then back the other way. It was very hard to keep our food from spilling, so we could eat.

Pearl Harbor was where we were going. We went to an Army camp there. I knew my brother, Burl, was near Pearl Harbor. I wrote and told him where I was and in a few days he called me. We decided to meet at the Royal Hawaiian Hotel. When I was getting ready to meet Burl, my Sergeant asked me if I had had the mumps. I said yes. Then he said get yourself out of here. As soon as I left they put up a sign that said “Quarantined.” We had our supper together and then I had to get back to camp. What an exciting evening that was for me, getting to see one of my family members.

From there we went to the Philippines. Clifford and I were still together. Seems like we stayed there about 6 weeks. When we first got to the Philippines, our Sergeant called us in to give us our assignment. He said, “You look like strong men. I am needing a BAR (Browning Automatic Rifle) team.” My job was to carry the BAR and Clifford to be my ammunition carrier. From there we then boarded a ship. The front end of it let down and the M Tracks could drive off in the water. We were headed to Okinawa.

We landed at Okinawa on April 1, 1945. We got in the M Tracks, which then drove off of the water. It looked like a tank with the top cut off. I think there were about 36 of us in each. When we entered the water in the M Track, it looked like the water was pouring in. Clifford and I were in the same M Track. I don’t know if I was in one that is shown in the famous news release picture or not. We went close to the Battle Ship almost under the Big Gun. The Air Craft were flying over and dropping bombs. They told us we would meet a lot of the Japanese Army and we would have a high wall to climb over. Neither prediction came true. There was hardly any wall to climb over, and no resistance at all. The Japanese army was on the other side of the Island. The Marines had landed earlier and they were fighting the Japanese there. We began to be under some sniper fire. On the 3rd day there, Clifford got a flesh wound on his shoulder. They sent him back to a hospital. That was the last I saw of him until after the war.

We moved up some toward the front and began getting some sniper fire once in a while. We then dug our foxholes and stayed for a while. We started up again on April 18 of 1945. Some of us were on guard every night. We were on so long and then someone would come to take your place. One night it was way past time for someone to come and take my place. I got out of my foxhole and crawled close to where the Sergeant was on guard and started whispering loudly and finally woke him up. He could have shot me because we were instructed to shoot at anything that moved. I could have turned him in for being asleep on guard.

Early in the morning of the 19th, we started advancing, our planes had bombed the hill all night as well as the Army and Navy had been firing shells. When we got up closer, we found several enemy troops. I hadn’t gotten up the hill very far, when I got hit in my left arm. It took about a third of my muscle, cut the main artery, and damaged the nerves that go to my hand. Every time my heart beat, blood spurted way out. It looked to me like 10 feet or more. I went backward over the hill. There were some medics there. One medic got my first aid kit and put a tight bandage around my arm and stopped the bleeding. Soon an ambulance came close to us. I wanted to walk, but they said, “No you can’t.” Four men came with a stretcher and carried me. On our way to the ambulance, a sniper started shooting at us. They laid me down and ran for cover. I was close to where a tank had left a track. I rolled over in it. A tank came up and they ran out and stopped them and told them where the fire was coming from. He sprayed that area good and there was no more fire. The ambulance was waiting for me. From there they took me to a Field Hospital.

The hospital was a big tent. I was put on some kind of bed, which was just wide enough for me to lay on. It was wood and maybe had something spread over it. I remember that it was really hard.

That was around 9 a.m. I laid there until almost dark. They brought in men that they thought needed more urgent attention. Anyway, my arm started hurting so bad, I couldn’t stand to lay there any longer. I raised up. There was a Captain standing close and he said, “Soldier, what is the matter with you?” I told him about my arm hurting. He cut the bandage off and shook his head. I was on the operating table within 15 minutes. In a day or two I was flown to Guam and spent a few more days there. I was put on a plane again and flown to Hawaii. I stayed in Hawaii until June. Then to the mainland in San Francisco, California. Then I was taken on to Percy Jones General Hospital in Battle Creek, Michigan. This was my home for the next 18 months. We couldn’t make the trip all the way from San Francisco in one day. We stopped and spent the night in a WAC Camp. I was at home on furlough a lot while I was at Percy. I would get 30 days and sometimes 60. In December of 1946, I got my discharge. I went back to the farm that I was born and raised on. I still live on this farm. It has been in our family since 1915. My youngest son owns it now.

I went down to Arkansas to visit Clifford in November of 1947.

Clifford and I were talking on the phone the other day and wondered if there were any other BAR teams in which both members are still living.

This is like I remember it so some of my facts may not be right. Written by 89-year-old Coy E. Back, Eubank, Kentucky.

Coy Eugene Back was one of 68 veterans on the September 25, 2015, Honor Flight to Washington D.C.