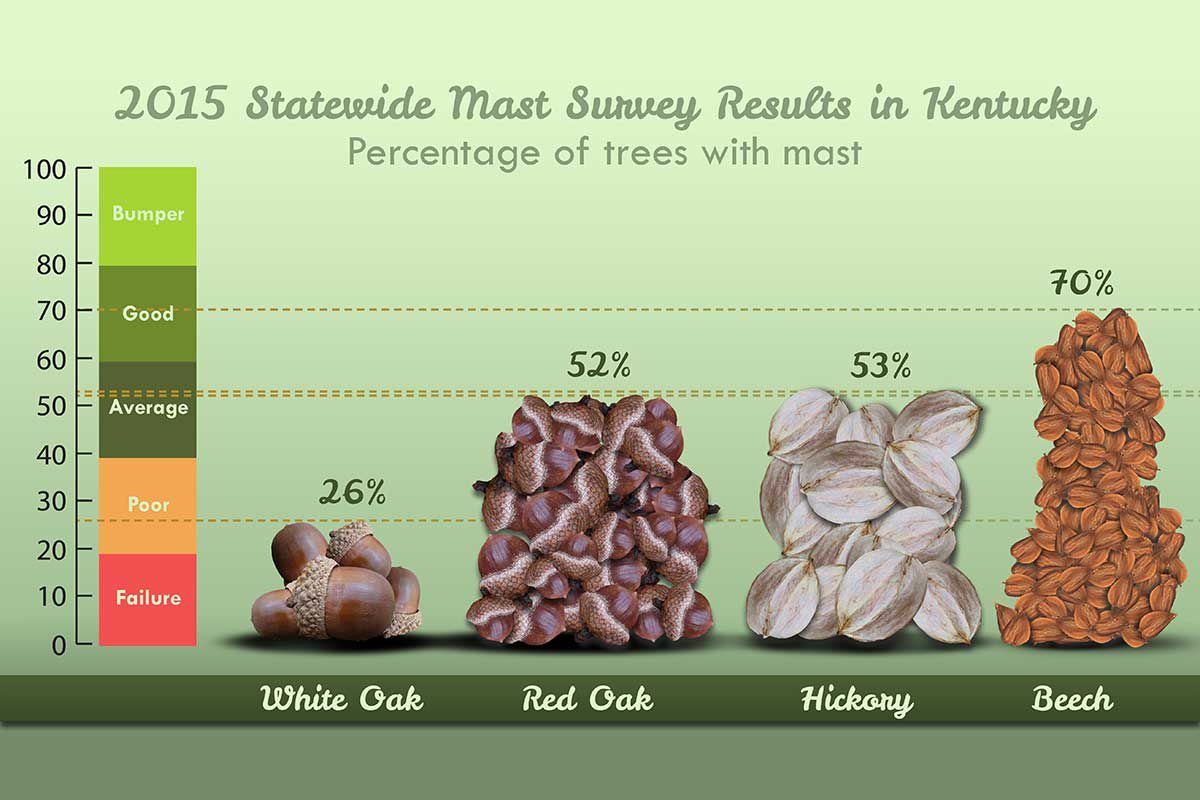 Forecasting the hunting seasons is an old-fashioned process that takes a network of people rather than a network of computers to fashion a prediction.

Groups of volunteers, for example, log and record the number of animals they see on their travels. But it’s the yearly mast survey that matters most to the 350,000 adults who hunt in Kentucky.

Mast is simply the nuts produced by trees or the berries growing closer to the ground. A bumper crop of acorns can keep animals near the trees. A bad year for nuts, however, can put animals on the move and increase their availability to hunters.

Ben Robinson, a small-game biologist with the Kentucky Department of Fish and Wildlife Resources, helps produce the mast survey every year. Initial reports indicate that it won’t be a bumper year for acorns.

Acorn production by red oaks looks spotty this year, with trees in some areas loaded but slim pickings in other locations. White oak acorns, which are favored by wildlife because they are less bitter than the red, will be hard to find this fall.

“This year looks not so great for white oaks,” Robinson says. “I think white oak acorns are going to be pretty sparse. If you’re a deer hunter, you’ll want to set up where you can find white oaks producing acorns. ”

Deer or elk hunters who can’t locate a loaded white oak should shift their focus to other food sources, says wildlife biologist Gabe Jenkins. “Food plots and agricultural fields might be hotspots later in the year,” says Jenkins, who runs the state’s deer and elk programs. “We hope this will bring them out in the open and give hunters a better opportunity.”

Initial survey results reveal that beech trees are heavy with nuts this year. “Everything likes beech, from bears to turkeys to small game,” Robinson says. “You have a lot of critters that go after those beech nuts, and it looks like a good year.”

Hickories, whose nuts are a favorite of squirrels, have spotty production this year. “Some areas good, others are not so great,” Robinson says. “For squirrel hunters, if you can find the hickory groves with nuts on them, that’s where you’ll find the squirrels.”

Hunting for a variety of species this year won’t be complicated. Find the food and you’ll find your game.

Want to help those in need? Consider donating your deer to Kentucky Hunters for the Hungry. Last year, this charity provided 560,000 meals to the hungry. Find out more online at kyhuntersforthehungry.