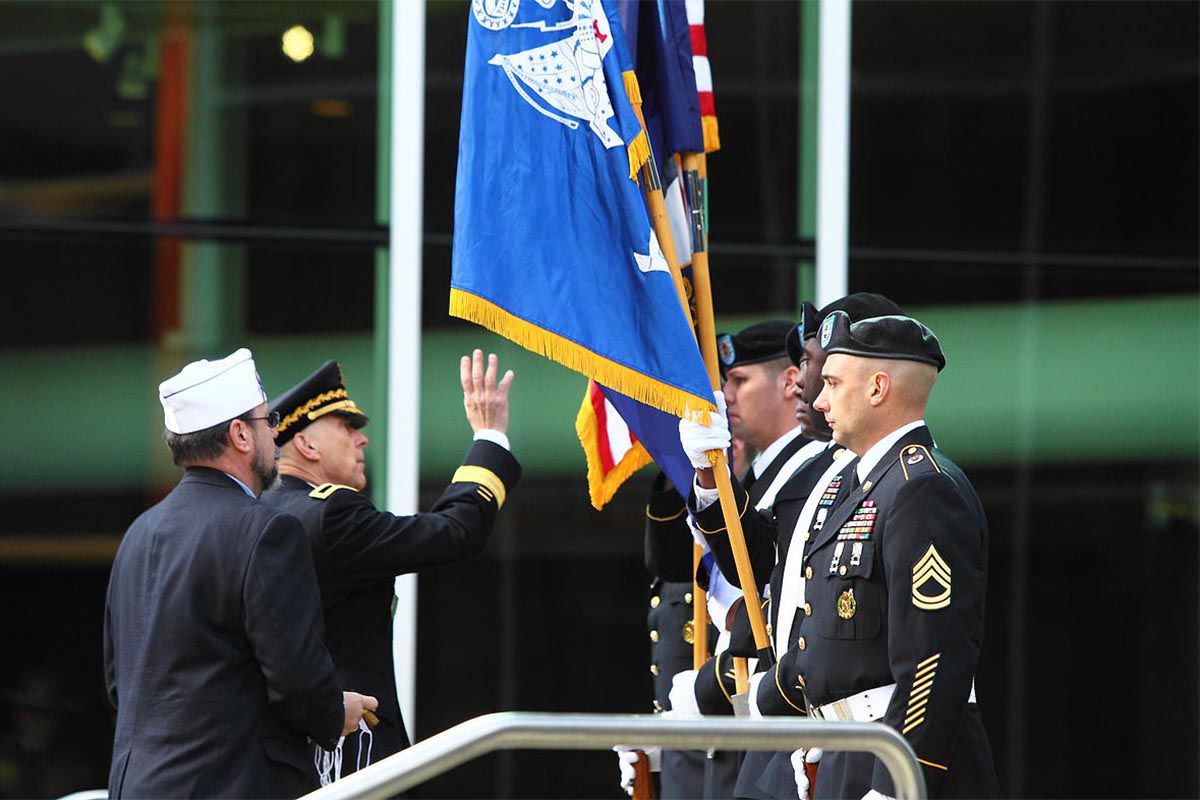 Since 2011, the Parade and Massing of the Colors Ceremony has grown to include more than 80 units, about 1,300 individual participants, special displays, and related events, all to honor American veterans from all wars, active duty members of the Armed Services and their families.

After a hiatus of approximately 60 years, Louisville’s Veterans Day Parade started on Veterans Day, November 11, 2011, as a commemoration of the date—the 11th day of the 11th month of the 11th year—a coincidence that would not occur for another 100 years. This year’s parade will start at 11 A.M., the hour that the cease-fire took effect to end World War I on November 11, 1918. The day became known first as Armistice Day and now as Veterans Day.

Grand Marshals of the parade are a male and a female WWII veteran from each of the five branches of the Armed Services. Special seating has been reserved for WWII veterans immediately across Main Street in front of the Review Stand.

A special entertainment program will take place between 10:30 and 11:00 A.M. on the Review Stand; it will feature The Ladies for Liberty and other musical groups. A special unit is included this year to showcase the Year of the Woman Veterans—a representative of each of the five service branches will ride in the parade.

Restored military equipment—tanks, jeeps, trucks of all sizes participate in the parade, then line Main Street from 6th to 7th for display.

Service organizations set up booths to distribute information on services provided to veterans.

A Massing of the Colors ceremony takes place immediately upon the last parade unit passing the Review Stand. The ceremony consists of service chaplains blessing the national colors in each participating Color Guard and presenting each unit with a commemorative battle ribbon. Approximately 50 Color Guards participate.

Afterward, all parade participants and spectators are invited to a reception in the lobby of the Kentucky Center for the Arts at 5th and Main, sponsored by Humana.

The parade is planned and executed by a committee of community leaders, representing many organizations. It is an official Metro Louisville event. The committee is led by the co-chairs: Treva Brockman of Dazzle Consulting, Dell and Fred Courtney of VisionWorks LLC, and Wayne Hettinger of Visual Presentations Inc.

OTHER VETERAN DAY EVENTS AROUND KENTUCKY

* Send us your Veterans Day event info and we’ll add. Send to e-mail@kentuckyliving.com subject line Veterans Day, or post to our Facebook