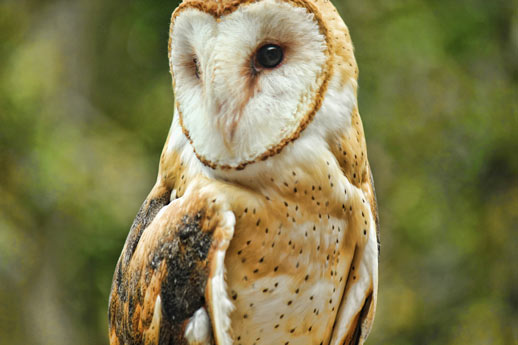 Report sightings and help biologists learn more about this bird

FRANKFORT, April 23, 2019—Wildlife biologists with the Kentucky Department of Fish and Wildlife Resources need the public’s help in locating barn owl nesting sites to gain a deeper understanding of why the species is rare in the state.

Barn owls, with their distinctive heart-shaped faces and dark eyes, were plentiful across Kentucky as late as the 1960s. By 2016, however, there were only about 75 documented nesting locations statewide.

More common owl species are often confused with barn owls. Barn owls do not hoot like some owls species. Instead, they screech and hiss, especially when approached. Barn owls have no ear tufts. They are a medium-sized bird, measuring 14-20 inches tall. However, they can appear larger when in flight due to their 3½-foot wingspan. Barn owls have a whitish face and breast with whitish to pale cinnamon bodies.

Barn owls prefer open areas such as hayfields and pastures; they are not usually found in the forest. They sometimes settle in older residential areas that have larger, cavity-prone trees. Although they often nest in hollow trees, barn owls also regularly nest in manmade structures such as old barns, silos, grain bins, chimneys, hay lofts and attics.

Barn owls nest year-round in Kentucky, although most of the nesting activity occurs from March through August. They do not build a nest of sticks and grass. Instead, they lay their eggs directly on the surface of the nest site they choose.

Barn owls are sensitive to disturbance, so if a nest is found, it’s best to leave it alone to avoid attracting attention to it. Researchers are careful to document nests without disturbing the owls.

Researchers are also asking for the public to report any dead barn owls, so that specimens can be collected for research.

Anyone with information about the location of a barn owl nest or a dead barn owl should contact Wildlife Biologist Kate Slankard at 1-800-858-1549. Observers can also email her at kate.slankard@ky.gov.

For the protection of owls and landowners, exact nesting locations and landowner information is strictly confidential and will not be released to the public. Information provided to Kentucky Fish and Wildlife for this study is used for research purposes only.

For more information about this species, go here.