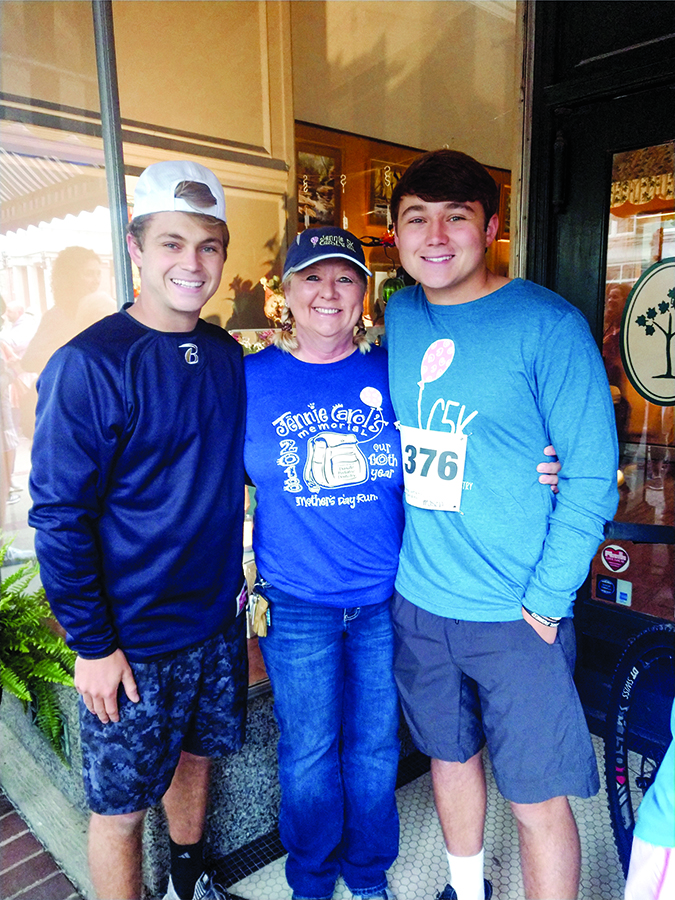 Karen Black and her grandsons, Evan, left, and Mason Tarter, are thankful for the proceeds from the Jennie Carol Tarter 5K that provide food for children. Photo: Becca Tarter

In fact, Logan has volunteered to coach every sport Levi has played, including basketball and baseball.

“When I was younger, my daddy always coached whatever I did,” Logan recalls. “Some of the best times I had growing up were playing on a team with my twin brother that my father coached. I want to replicate that for Logan and give other kids a chance to play, too.”

Logan says he is a “big advocate for youth sports.

“Through sports, I learned that you have to have a good work ethic. You have to work for what you get. Sports teach you a lot of life lessons.”

The day before Mother’s Day is a time to run and remember in Danville.

Since 2009, the Jennie Carol’s Memorial Mother’s Day Run has celebrated the life of its namesake and her love of running.

The year before, Jennie Carol Tarter had just completed her first mini-marathon, triumphantly crossing the finish line with her boys, Evan, 9, and Mason, 6, holding her hands. But then tragedy struck. The young mother passed away after choking at a restaurant. Medical interventions could not save her.

Jennie’s four closest friends—Jenny Tarter, Julie Cox, Lori Anne Clark and Amy Longwill—didn’t want the memory of their vivacious, loving friend to die with her, so they started the race.

Held on the Saturday before Mother’s Day, the 5K race attracts a lot of mothers and daughters, including Jennie’s own mother, Karen Black, vice president of human resources for South Kentucky RECC.

“You can’t imagine as a mother what pride you feel,” says Karen. “As long as this race is going on, she will never be forgotten. So few people have a legacy such as this. It is a true, true blessing to me.”

And a blessing to others. Proceeds from the race go to South Kentucky RECC’s BackPack for Kids Program, a favorite of Jennie’s that provides food to children who may not have enough to eat on weekends and holidays.