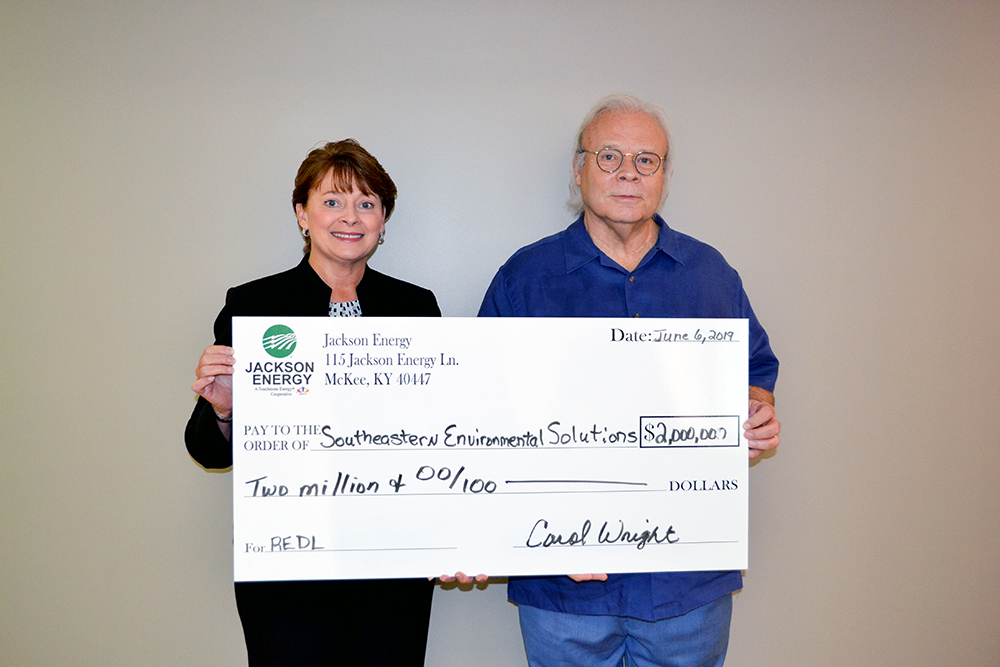 With the help of a Rural Development loan through Jackson Energy Cooperative, a Laurel County company is adding machinery and jobs at its facility in the Fariston Industrial Park.

“We recycle material that at one point in time would go into a landfill,” says Ernest Matt House, co-owner of Southeastern Environmental Solutions, LLC. Other owners include Mike Bargo and Russ Asher. “We’re taking scrap material, mainly from the automotive industry and repurposing it.” House says the scrap comes mainly from materials used for headliners and flooring that goes down before carpet is installed in vehicles.

The $2 million no-interest loan is offered through the United States Department of Agriculture’s Rural Development office and the loans are administered by local electric cooperatives, like Jackson Energy. The company expects to add 30 new jobs over the next three years as a result of the loan.

“The Rural Development Loan Program allows Jackson Energy to help local companies expand,” says Jackson Energy President & CEO Carol Wright. “This is the 12th loan we have administered to companies throughout our service area. Our mission is to improve the quality of life in the region not only by providing electric service but also through economic development.”

EPA Administrator Andrew Wheeler signed the Affordable Clean Energy (ACE) rule June 19, which effectively repeals and replaces the 2015 Clean Power Plan. The CPP would have forced some utilities to switch from coal to lower-emitting fuels as a primary means of achieving deep cuts in CO2 emissions. Co-ops had warned that the new and aggressive timelines in the CPP threatened to increase costs and reliability problems. The plan, however, was stayed by the U.S. Supreme Court in 2016 and never took effect.

The ACE rule should largely prevent generation and transmission co-ops from being forced to prematurely shut down coal-fired plants, says Ted Cromwell, the National Rural Electric Cooperative Association’s senior director of environmental issues. It also gives states more flexibility to work with individual co-ops to determine where action still needs to be taken in a cost-effective way.

“The Environmental Protection Agency’s Affordable Clean Energy rule takes a thoughtful approach to reducing CO2 emissions, while protecting the reliability and affordability of energy for our consumer-members,” says Chris Perry, president and CEO of Kentucky Electric Cooperatives. “Because electric cooperatives are community-focused organizations that are built by, led by and belong to the communities we serve, all costs are paid by those consumer-members.”

Perry says the ACE ruling provides a more flexible path forward, “which will minimize the cost to consumer-members and preserve the reliability of the electric grid as our co-ops work to promote a healthy environment and vibrant rural communities. Cooperatives serve some of the most remote areas of the commonwealth, where residents are often the least able to afford rate increases.”

Electric co-ops have reduced carbon dioxide emissions by 12% since 2005 while increasing generation by more than 12 million megawatt-hours, according to U.S. EPA and the Energy Information Administration figures.

When the largest steel producer in America decided to invest $2 billion to expand its operation, it chose two locations on the Ohio River served by electric cooperatives in Kentucky.

In addition to the $650 million expansion of its mill producing flat-rolled coils in Ghent, Nucor Corp. is planning to build a $1.35 billion steel plate manufacturing mill in Brandenburg.

The Ghent facility is served by Owen Electric and East Kentucky Power cooperatives, while the Brandenburg site is served by Meade County RECC and Big Rivers Electric.

Kentucky offers the lowest industrial electric power rates east of the Mississippi—one of its many attractive features for manufacturers. That played a role in Nucor’s decision, as the mills are major electricity consumers and both projects will create significant additional demand.

The projects are great examples of how Kentucky’s electric cooperatives are key players in the state’s economic development, says Chris Perry, president and CEO of Kentucky Electric Cooperatives.

“The co-op mission is to improve the quality of life in the communities we serve,” Perry says. “The decisions by Nucor Corp. to work with co-ops on these projects affirms that mission and is the latest example of how co-ops are ready to power Kentucky’s economy.”

The expansions are projected to create thousands of construction jobs and hundreds of permanent jobs. In Kentucky, Nucor and its affiliates employ approximately 2,000 people and include Nucor Steel Gallatin, Steel Technologies LLC, Republic Conduit, and Harris Rebar. Nucor also owns the David J. Joseph Co. and its six subsidiary River Metals Recycling facilities across the state, which collect and recycle scrap metal.