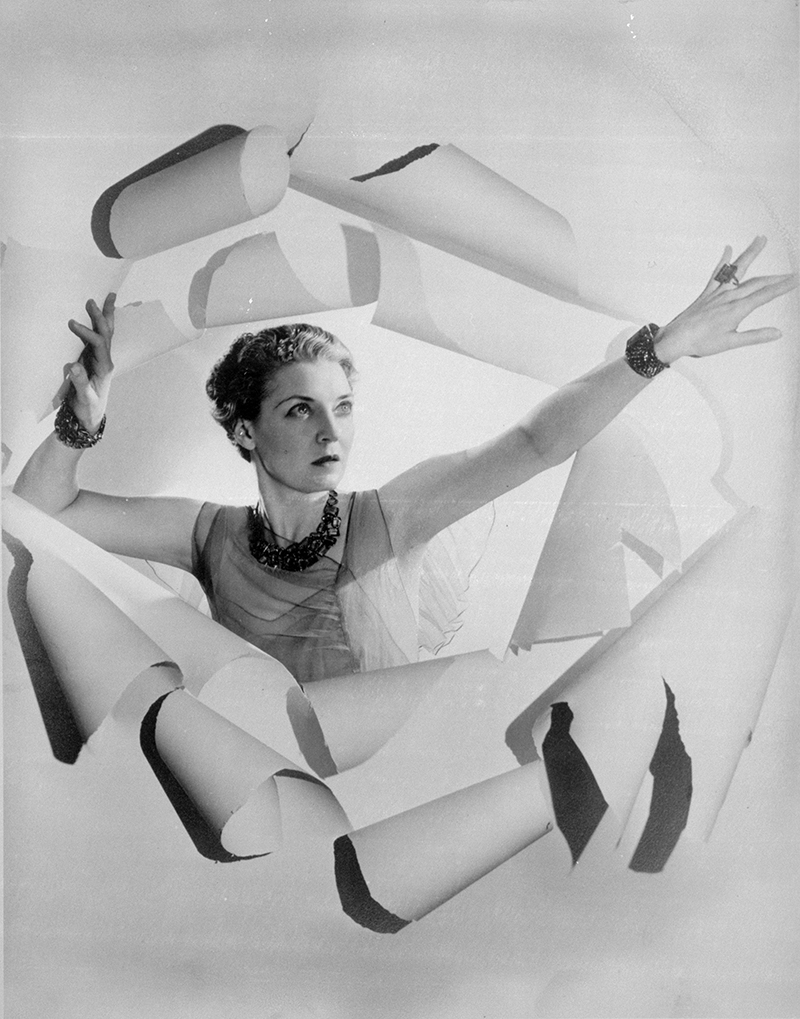 The Frazier History Museum in partnership with Churchill Downs is proud to announce a new special exhibition entitled Magnificent Mona Bismarck: Kentucky Style Icon. Mona was a midcentury socialite from Louisville who in 1933 became the first American named Best-Dressed Woman in the World. A major client of Balenciaga and other world-class designers, she helped popularize a number of trends in women’s wear, including halter neck tops, wide tulle skirts and the asymmetrical bias-cut dress.

Curated by Scott Rogers, this retrospective features over 50 of Mona’s most stylish garments and hats from the 1930s to the 1970s designed by the leading luminaries of haute couture, including Balenciaga, Givenchy, Pucci and Vionnet. Special attention is given to her intimate collaboration with the Spanish designer Cristóbal Balenciaga, as well as her lifelong friendship with the British photographer Cecil Beaton, whose photographs, drawings and articles for Vogue are what catapulted Mona to international fame.

Born Mona Travis Strader in Louisville in 1897, she was the daughter of a horse trainer and breeder at Churchill Downs and Lexington’s Fairland Farm. Her third marriage in 1926 to the entrepreneur Harrison Williams propelled her into the aristocracy when his net worth ballooned to $680 million, making him the wealthiest man — and Mona the wealthiest woman — in America.

On display are stunning photographs of their palatial homes excerpted from Vogue, which published features on their white stucco house in Palm Beach; their six-story townhouse in Manhattan with Persian rugs, parquet floors and crystal candelabra; and Oak Point, their bayside property on Long Island with lemon trees, tennis courts and a hydroplane for sailing to Wall Street. “The only reason the Harrison Williamses don’t live like princes,” reported Time in 1929, “is that princes can’t afford to live like the Harrison Williamses.”

In 1933 a panel of seven famous couturiers in Europe — Balenciaga, Chanel, Lanvin, Lelong, Mainbocher, Molyneaux and Vionnet — crowned Mona the “Best-Dressed Woman in the World.” She was the first American to receive this title, which she won again in 1934 and 1936. Her award-winning couture came from several prestigious designers, including Elsa Schiaparelli and Madeleine Vionnet. But after the rising star Cristóbal Balenciaga fled war-torn Spain in 1936 to open a new workshop in Paris, he became the near-exclusive designer of Mona’s clothing.

Gallery II, “Day Wear & Cocktail Wear,” and Gallery III, “Evening Wear,” celebrate Mona’s 30-year collaboration with Balenciaga. On display are two dozen of her most tasteful Balenciaga day suits and evening ensembles from the 1950s and ‘60s, including a marigold linen tunic with diagonal pockets and a matching skirt and a pale salmon lamé evening dress with spaghetti straps. Cocktail gowns include an ivory banana fiber matelassé sleeveless dress and matching coat and an A-line eyelet dress of black cotton mesh gazar, a fabric invented for Balenciaga by Abraham of Switzerland.

Gallery II features a reproduction of Portrait of Mrs. Harrison Williams, an oil painting that Mona commissioned from the Surrealist artist Salvador Dalí in the 1940s. Before the war Harrison had acquired Il Fortino, a cliffside villa on a parcel of land in Capri that had been occupied 2,000 years earlier by Caesar Augustus. Dalí’s portrait depicts Mona standing barefoot in rags among Roman antiquities — a nod to the ancient history of her estate. Apparently Dalí, unbeknownst to Mona, had originally painted her in the nude, but when she protested he dressed her in rags.

In 1968, when Mona got word that Balenciaga had retired, she shut herself in her bedroom for three days. Having dressed Mona for three decades straight, Balenciaga now referred her to his French protégé, Hubert de Givenchy. An impressive selection of the garments Givenchy went on to make for Mona can be seen in Gallery III, including a silk chiffon dinner dress in red and black graphic floral pattern, a butterscotch silk evening ensemble with crystal jewels and feathers and a pair of silk organza cocktail pajamas with brushstroke stripes of fuchsia, yellow, orange and sky blue.

A collection of Mona’s shoes and jewelry in the gallery includes 18 pairs of her exquisite Roger Vivier heels; a citrine grey and gold Belperron bib necklace, a gold and diamond Belperron “godrons” cuff and a lion’s paw shell Verdura brooch of gold, emerald and diamond. Framed drawings illustrate the radiance of the “Bismarck Sapphire,” a 98.6-carat cornflower blue gemstone that Mona purchased in Burma on her honeymoon then had set vertically among baguette-cut diamonds in a platinum link Cartier necklace.

Gallery IV pays photographic tribute to her “Greatest Loves”: swimming, gardening and playing with her dogs. Once Harrison died in 1953 and left Mona $90 million, she married her best friend and secretary, Count Edward von Bismarck, grandson of Otto von Bismarck, the Iron Chancellor of Germany. She and “Eddie” wintered in Paris (they lived in Voltaire’s old apartment at the Hôtel Lambert) and summered in Capri, where Mona could indulge in her passions — gardening in long linen Balenciaga walking shorts, tending magnolias with fresh water ferried in from Italy and swimming in the Tyrrhenian Sea.

Mona died in 1983 and was buried on Long Island with her third and fourth husbands. As a gift to Louisville, her place of birth, she generously donated her voluminous collection of letters to the Filson Historical Society. On display are glowing letters to Mona from Cole Porter, the Duchess of Windsor and Jacqueline Kennedy Onassis, among others. “There is a slight vacuum in my life, so I am sending you my love,” reads one from Cecil Beaton, written four years before his death. “I don’t know how long I shall live…but please remember, when I don’t write, that you are far and away my favorite.”