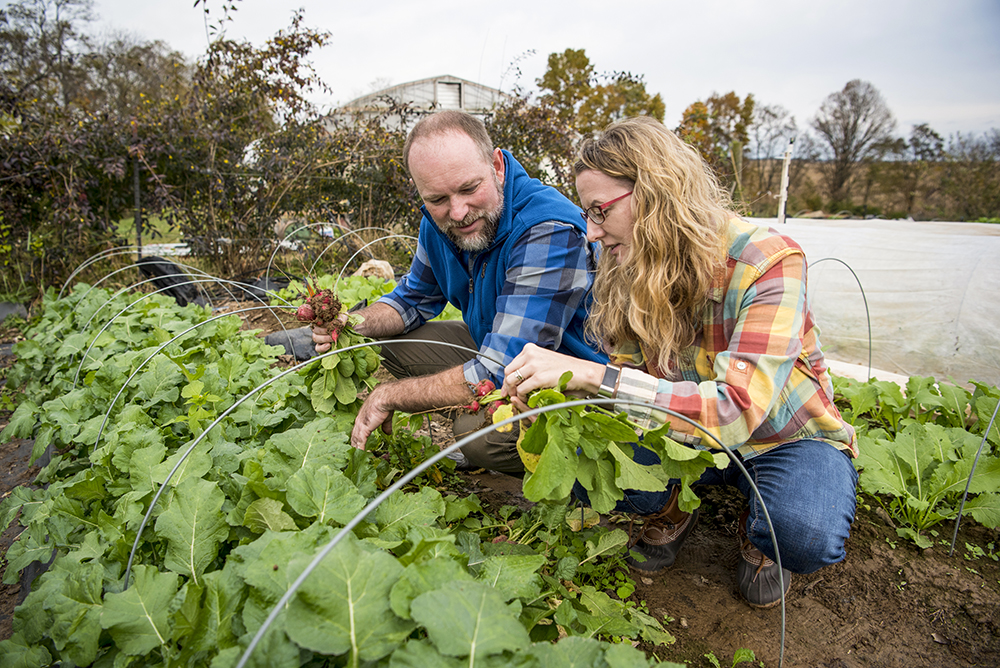 While the family farm might be shrinking, part-timers are growing strong

How do a human resources manager and a quality engineer end up as the owners of a farm, a high tunnel, greenhouse community-supported agriculture program? Well, if you ask them—just like anyone else.

“Can the average farmer who wants to get into vegetable production get a high tunnel? Yes,” says Mary Breeze, an HR manager by day. “Go get a grant and you can build your tunnel and have no debt.”

“You can have some capital left over,” adds husband, Chris, a quality engineer. “Or you can go very bare bones. You can do low tunnels like we still do. No. 9 wires that you can go get at Lowe’s, with row (tobacco) cotton.

“We’re not special. We had to apply three times, but just keep at it.”

The grant Mary and Chris reference is through the U.S. Department of Agriculture’s Natural Resources Conservation Service.

“It took us three applications, but we finally got funded,” Mary says. “And now we have a high tunnel that’s bigger than our house.”

The Breezes began the Whispering Breeze Farm, LLC, in the 2015 growing season. It was the first year the Breezes, consumer-members of Fleming-Mason Energy, sold their produce and joined the Mason County Farmers Market.

In the seasons since, the garden in their yard has grown into a small farm, now producing enough to support a community-supported agriculture program (CSA) with 15 families—with enough left over to supply a few local restaurants.

The Breezes are no strangers to life on a farm—Chris’ parents and Mary’s grandparents were tobacco farmers—but neither had much experience with vegetable farming.

“I needed something to kind of get my farming fix and we just said, ‘Hey, we’re going to have a garden,’” Chris says. “The first spring that we were married, in 2003, we started our first garden together, and we grew and grew. It kept getting bigger and we would give stuff away and then, I guess it was six years ago, our county Extension agent Tracey Parriman says, ‘You should start selling your stuff.’”

At that point, the couple’s farming style had expanded and evolved considerably, despite both working full time. When they started the garden, they used herbicides, pesticides and synthetic fertilizers, but after attending a workshop on organic growing at a Farm and Family Night at Maysville Community and Technical College, they decided to adopt more natural farming practices.

By the time they met Parriman at a Master Gardener program hosted by their local Cooperative Extension Service office, the couple had begun to explore and study successful market gardens and the possibilities that came with expanding their own.

What is the difference between a high tunnel and a greenhouse?

The growth of Whispering Breeze Farm—now operating on about an acre and a half in Mason County—has been an exercise in experimentation and evaluation. The Breezes began using tobacco cotton and low tunnels as a way to protect their crops and extend their growing season. They started turning beds in a day, harvesting and planting fresh starters in newly vacant rows.

While the farm has grown, they’ve retained natural farming practices. Theirs is not a “certified organic” farm, but they do follow organic guidelines. The cost of maintaining certification and the associated paperwork aren’t worth it to them.

Chris says, “Most of our customers have been to our farm. They trust us to grow our food the way we say that we’re growing our food.”

The Breezes’ high tunnel helps extend the growing season and, with lights installed, enables Chris and Mary to work for several hours after coming home from work each day.

The couple also used leftover materials from the high tunnel to help build a small greenhouse where they can cultivate starters from seeds. They intended to use gas to heat it, but when that proved too difficult to control and too expensive in cooler seasons, they reached out to Fleming-Mason Energy to extend their service from their home to the greenhouse.

The electric cooperative featured the couple in last year’s annual report. “Their particular business was something that was very interesting to us,” says Lori Ulrich, Fleming-Mason Energy’s marketing and public relations manager. “And (it) showcases a large part of our heritage here in this region.

“Our particular territory that we cover has traditionally been very agricultural-based. And, the Breezes kind of represent how agriculture has changed in this region in the last 20 years, how agriculture has evolved. It’s exciting to see young families like this that are doing new and innovative things.”

Alongside the agricultural methods, the business end of farming has changed for the Breezes. They made a point to market themselves from the beginning, creating a logo and associating the brand with their organic-style practices. They created brand recognition at the farmers market and among locals. “We joke and say it’s because we’re really great, personable people,” Mary says. “I think that’s where it started—we were really excited to talk about what we were doing at the farmers market. I think that our enthusiasm for what we were doing was kind of contagious.”

They collected email addresses and started a newsletter, sharing “The Menu” each week, along with photos and stories from the farm. The list quickly grew from 50 to 200 names. People began to pre-order their produce for pickup at the farmers market. They started a CSA, first with five people, then 10. But the market was a full day’s work each Saturday and after three years of selling there, they decided to leave.

“It’s a big trade to say what we could have done, had we not been sitting at the market,” explains Mary, as she recounts the collective 16 hours spent there each weekend. “So, it was a tough decision. And Chris really struggled with it. But we came to the agreement that we weren’t going to do it in 2018, and we didn’t. It was a hard decision, especially because Chris, at the time, was the vice president of the local farmers market. I can honestly say this: had we not made that decision, I would be in a different place with it today. I think I would be past burnout and ready to say, ‘I’m kind of done.’”

The choice to leave was one that suited the needs of Whispering Breeze Farm. Following this move, the CSA grew to 15 and the couple established a pick-up spot at a local café that also began using their produce in its meals. Later, a restaurant reopening in nearby Augusta approached them to begin supplying produce for its new farm-to-table menu.

Despite the business expansion, the Breezes have scaled back some of their acreage, optimizing the use of a smaller space with better techniques. They continue their full-time jobs, with no intention of leaving them. As they settle into this new model of farming and business, they’re exploring ways to share what they’ve learned—such as food literacy and career paths in farming—as well as shed light on how to start a farm like theirs.