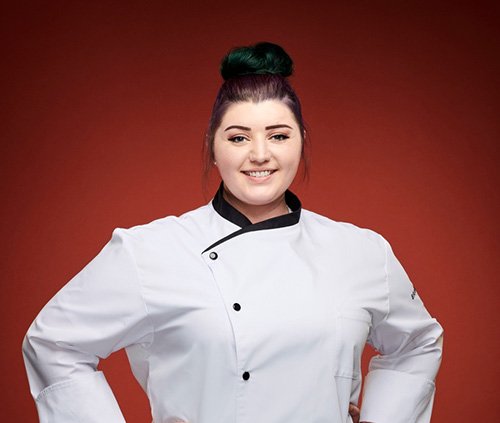 Before she ended up on the latest season of “Hell’s Kitchen,” Brittani Ratcliff found a little slice of heaven as a child in her grandmother’s kitchen.

Growing up in the small Carter County town of Willard, the current executive sous chef and catering chef with Aramark at Morehead State University comes from a long line of farmers. She learned to raise livestock – not to mention grow, harvest and can her own vegetables – since she was around five years old. One of the first dishes she ever learned how to cook was when she assisted her grandmother Bonnie Ratcliff’s chicken and dumplings at age 14.

Even as she was attending college at the University of Kentucky (UK) with plans to go to medical school, she couldn’t escape her calling. When she and her roommates were living on ramen noodles, she had an “a-ha moment” as she researched Asian cuisine to elevate the college staple by adding eggs, chicken and green onions.

“It made me really happy to see my roommates enjoy my food,” she said. “Just the passion for cooking…I couldn’t stay away from it.”

Ratcliff dropped out of UK and attended Sullivan University to earn an associate degree in culinary arts. After spending several years working as a line cook and catering chef in Lexington and Louisville, she has spent the last seven years working for Aramark at Morehead State University. Ratcliff creates menus for and caters events large and small for the University and Rowan County. One of the largest MSU events she is consistently responsible for making a flavorful success is the food offerings for the annual Spring Gala, MSU’s largest fundraiser.

“I don’t have a whole team of people behind me,” she said of her current job. “Whether it’s an event for 10 people or an event for 400 people, this is my menu.”

“I’ve been a mega-fan since the first season,” she said. “I’ve watched every season two or three times.”

However, even though Ratcliff was working in a field that was her passion, she admits she didn’t have the same creative spark and drive that she used to when it came to her cooking. She was in a rut. It was about this time that she heard the show was accepting applications for contestants for its season 19 run in Lake Tahoe.

“I thought this was a sign for me,” she said. “I needed to push myself to do something bigger than what I thought I would do.”

Ratcliff’s time on season 19 of “Hell’s Kitchen,” which debuted on Jan. 7, is one she described as a “pleasant intense,” which is almost an apt description for the show’s star chef.

“I think his (Ramsay’s) personality is 100 percent at all times. He’s just passionate about the kitchen and cooking. He’s passionate about life in general and you can tell,” she said. “He is everything I expected, plus a little bit more.”

In addition to showing off her cooking style she calls “Appalachian French fusion” and building relationships with her castmates that feel more like family, Ratcliff left with a renewed desire in the kitchen. She is working on obtaining a farm and going back to her roots, showcasing her cooking skills, showing people how to grow and preserve their vegetables, and putting smiles on their faces with food.

“Since I’ve been back, it’s been one idea after the other,” she said. “I found out more of who I was and the direction I want to go with my career and my life.”