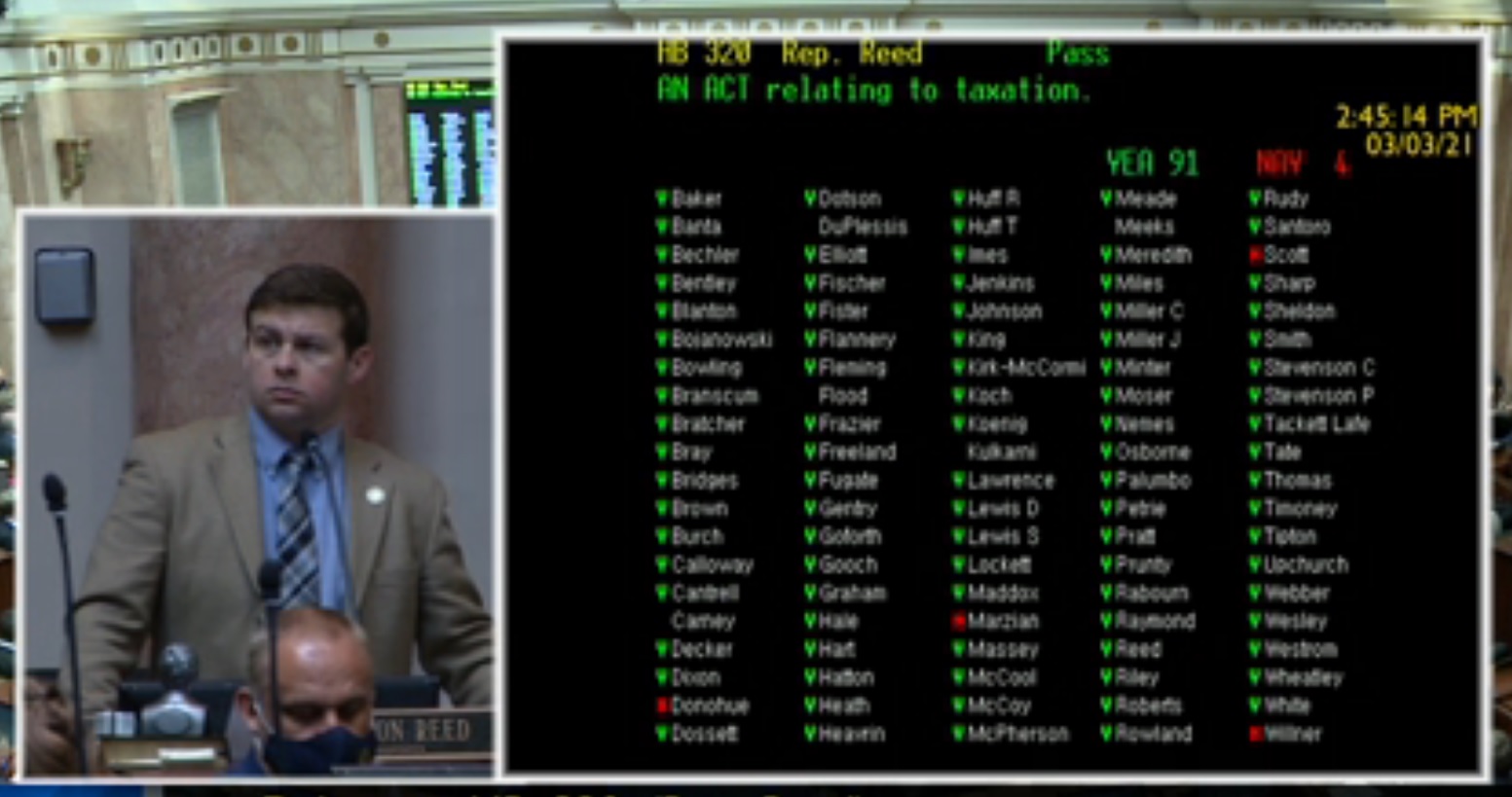 Rep. Brandon Reed watches as broadband legislation is approved by the Kentucky House

‘It’s time to do something. The funds are here. The need is evident’

With an overwhelming and bipartisan 91-4 vote on Wednesday, the Kentucky House approved legislation that allocates $250 million for broadband expansion and allows electric cooperatives to add broadband service.

“Those of us from the rural areas of this state have waited and waited and we’ve become impatient,” said House Speaker Pro Tempore David Meade (R-Stanford). “And it’s time to do something. The funds are here. The need is evident. So, let’s strike while the iron is hot.”

Sponsored by Rep. Brandon Reed (R-Hodgenville) and Rep. Jason Petrie (R-Elkton), House Bill 320 now heads to the Kentucky Senate, where it has the backing of rural advocates such as the Kentucky Farm Bureau and Kentucky Electric Cooperatives.

Introducing the bill on the House floor, Reed explained “it moves broadband forward in the Commonwealth of Kentucky with significant investment,” and “will clear the way for rural electric cooperatives to feasibly provide broadband service in unserved and underserved households and businesses through an affiliate.”

Though electric cooperatives did not spearhead the legislation, co-op leaders said they welcome and appreciate the confidence and trust legislators place in co-ops’ ability to serve the last mile.

“On the whole, areas served by regulated electric cooperatives in Kentucky are underserved by current broadband providers,” said Chris Perry president and CEO of Kentucky Electric Cooperatives, the statewide association of co-ops. “Because our co-op members need and deserve access to reliable high-speed broadband service, co-ops are encouraged that House Bill 320 breaks down unnecessary restrictions on who is allowed to provide broadband service and identifies crucial funding to make rural broadband service a reality.”

As the bill was introduced on Wednesday, an amendment offered by Meade boosted funding from $100 million to $250 million.

“Some of our areas have three to four homes per mile, and those areas will never be enticing to those large communication companies to service,” Meade said. “We’ve seen that year after year as we have been up here passing legislation to deregulate telecom companies and to establish avenues for additional money to entice them to expand to that last mile. And when I say ‘last mile,’ I mean to that last house on that small county back road in rural areas.

“We have seen that everything we have done has not been able to accomplish this ultimate goal. But with this bill, we are making a giant leap towards that goal. With this bill, we are saying to rural Kentucky, we know your need, we have heard you, and we care for you.”

House Bill 320 does not mandate that an electric cooperative provide broadband service. Instead, each co-op would determine whether entering the broadband business could be accomplished without jeopardizing the co-op’s primary objective of providing safe, reliable and affordable electricity to its members.

“Throughout every discussion, co-ops have insisted that any broadband expansion should not result in electric cooperative members paying more on their current electric bill,” Perry said. “This principle holds true with House Bill 320 which co-ops support as written and strongly oppose any amendments to this legislation that would pass the costs of broadband expansion onto the electric bills of local Kentuckians.”

As senators prepare to consider the bill, it’s being sent with a passionate call for action.

“We have 32,000 children in the state of Kentucky without internet,” said Rep. Phillip Pratt (R-Georgetown), “We have counties everywhere that do not have internet. This is a move forward to get this to the unserved and underserved areas of Kentucky. I would encourage everyone to be a Yes vote because this is sorely needed without a doubt.”